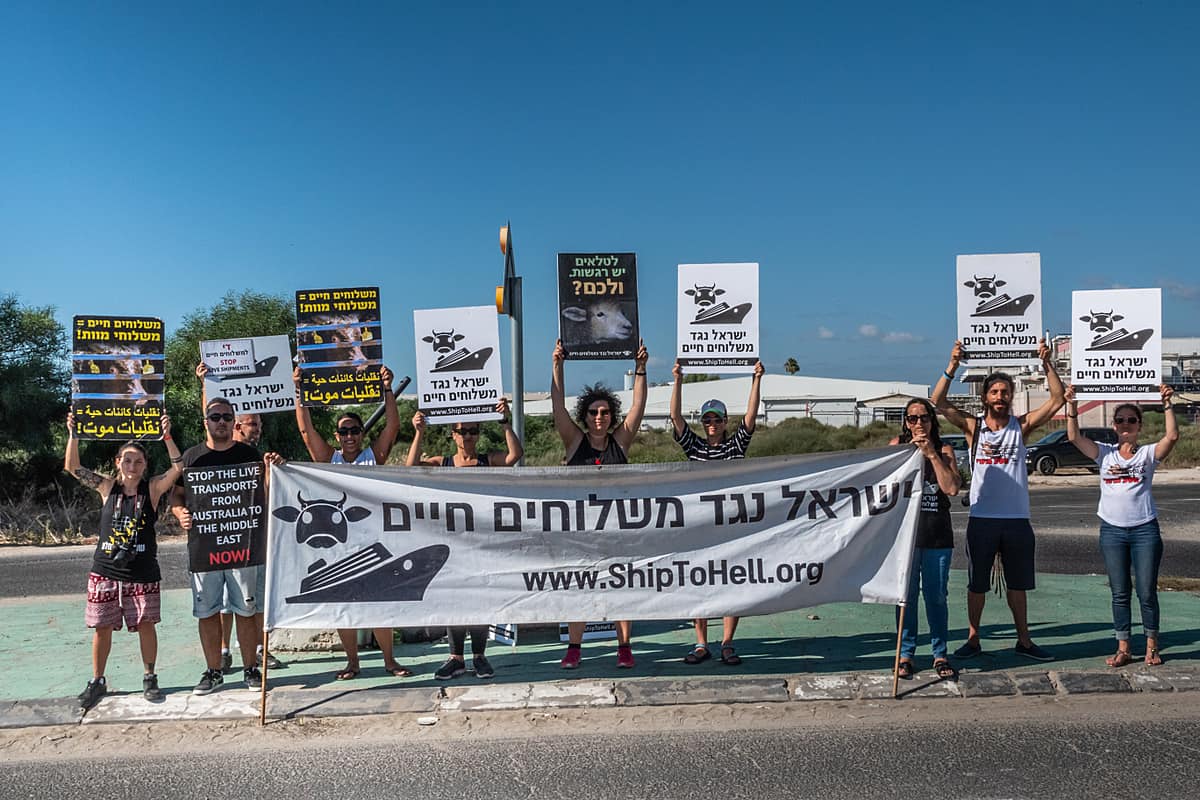 The live export trade of animals refers to their transport to various countries or regions. This could be for slaughter, breeding, or other types of exploitation. Millions of animals are transported by boats, trucks, airplanes, or trains and often across continents for very long distances. Species of all kinds are shipped for trade or purchase such as reptiles taken from the wild to be sold as pets, dolphins from the ocean that end up in aquariums, and bears and tigers stolen from the jungle or force bred for profit and then shipped off to end up in cages behind bars at the zoo or doing tricks at the circus.

Live transport is awful for all species, but farmed animals in particular are known to travel very far distances while being completely deprived of food, water, rest, bedding and veterinary care. Many animals die in transport and the ones that survive suffer greatly from the barbaric and cruel industries that make money off importing and exporting them. Animals do not deserve this. They are individual sentient beings with feelings and should be treated with kindness, compassion, and respect. Read on to learn why live exports should be banned immediately. 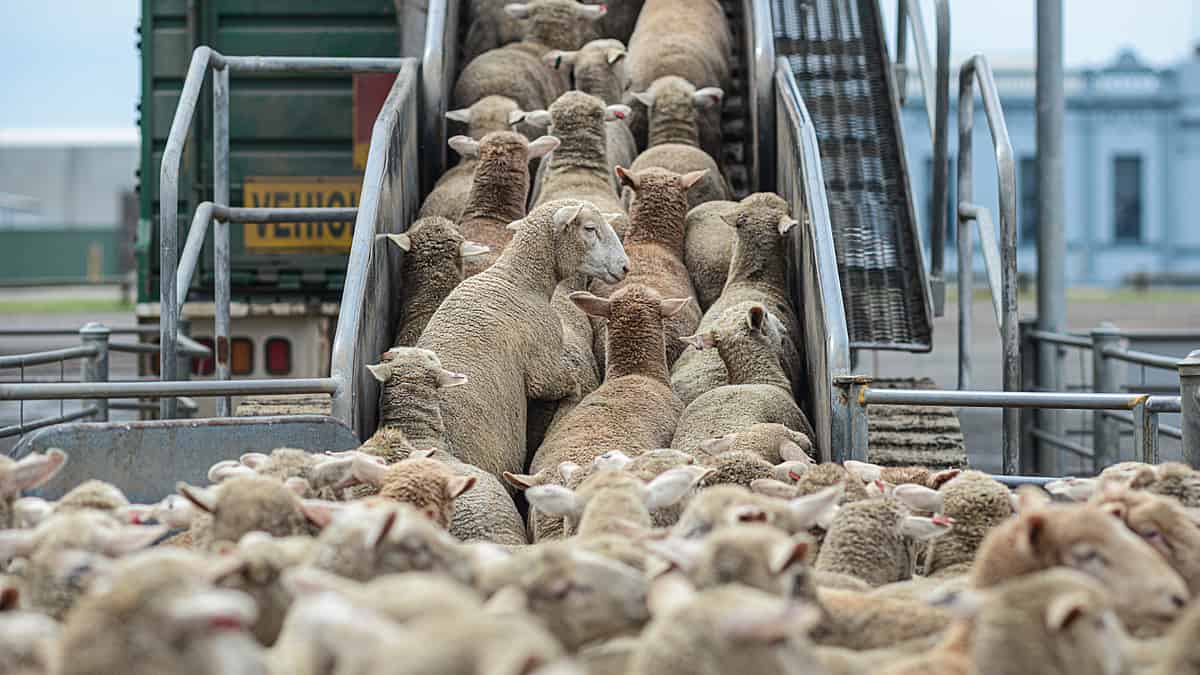 Extreme suffering on board

Regardless of what country the animals are being exported to, the conditions are so awful in transit that many animals don’t even make it to the end destination alive. According to the Australian Government website for the Department of Agriculture, Australia has one of the biggest live export industries in the world and exports live animals to over 60 counties.

“The livestock species that Australia exports for slaughter and breeding are cattle, sheep, goats, buffalo, deer, and camelids such as camels and alpacas. The first three of these species dominate the volume and value of livestock exports.” – Australian Government, Department of Agriculture

Sheep are such sweet and gentle creatures and do not deserve the suffering forced upon them from the animal agriculture industry. In 2018 camera footage captured what life is like on a sheep vessel traveling from Australia and was posted online by 60 Minutes Australia.  Animals Australia has provided the world with the first footage of animals aboard a live export ship. They have exposed an unlawful industry and revealed what millions of animals have endured for decades in the live export industry. (On their website you can add your name to their campaign to help get future animals off death ships). 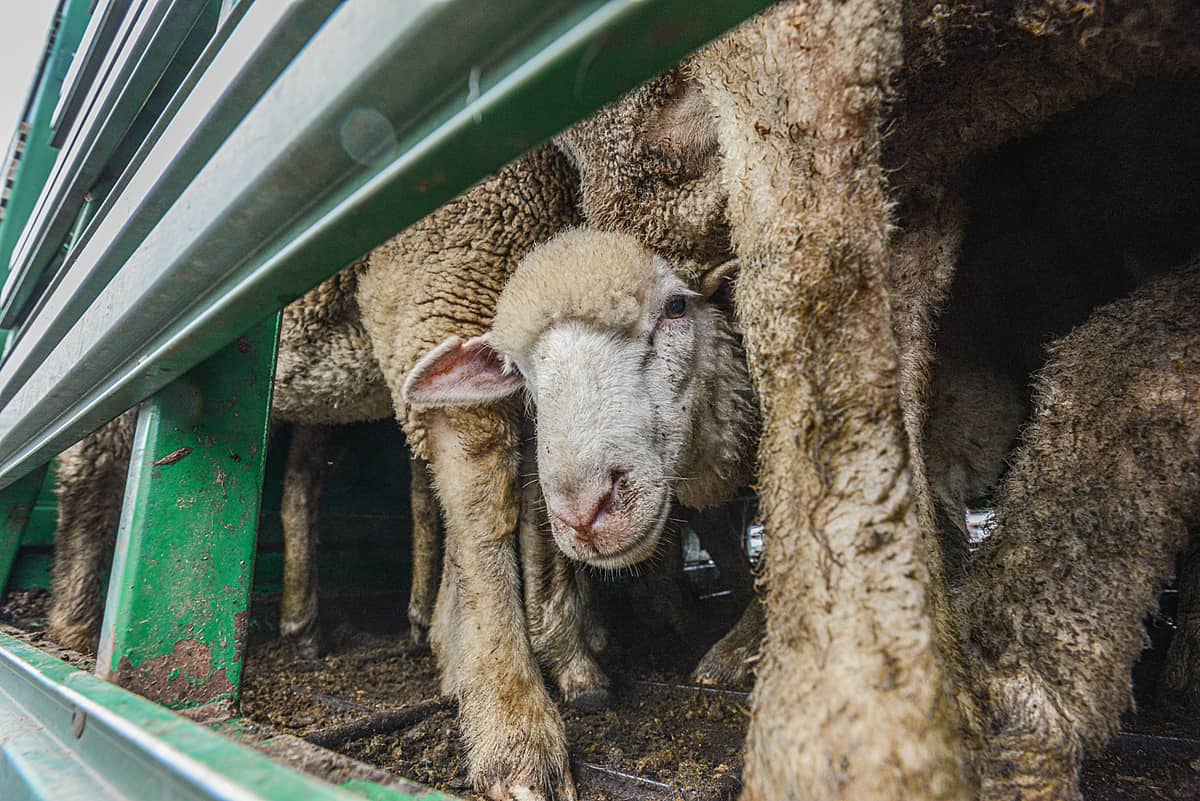 But it’s not just happening in Australia, the animals are on the way to other countries - both counties are responsible for the death of these creatures.  Many of the Australian cows are exported to Indonesia and Vietnam to be slaughtered for food, while most of the dairy cows are shipped to China. When it comes to sheep, Australia has routine shipments to the Middle East – including Qatar, Jordan, Kuwait, and Israel. ASM Global Campaign Director, Yael Gabay, lives in Israel and is also the founder of Israel Against Live Shipments, and Israel Animal Save. Gabay bears witness to the animals arriving from these ships.

“At Israel Against Live Shipments, we bore witness in the last 7 years to over 800 ships arriving, holding a vigil and documenting every single one. We watched millions of animals being sent to their next station until slaughter. Animals arrive blind from the ammonia fumes and covered in faeces, limbs broken, trampled animals. Offloading and onloading involve electric shockers, the weak and sick are thrown overboard. The list of cruel barbaric behaviour towards them is endless and so despicable, no developed world can ever say they are morally sound, if they are taking part in the live export trade.” 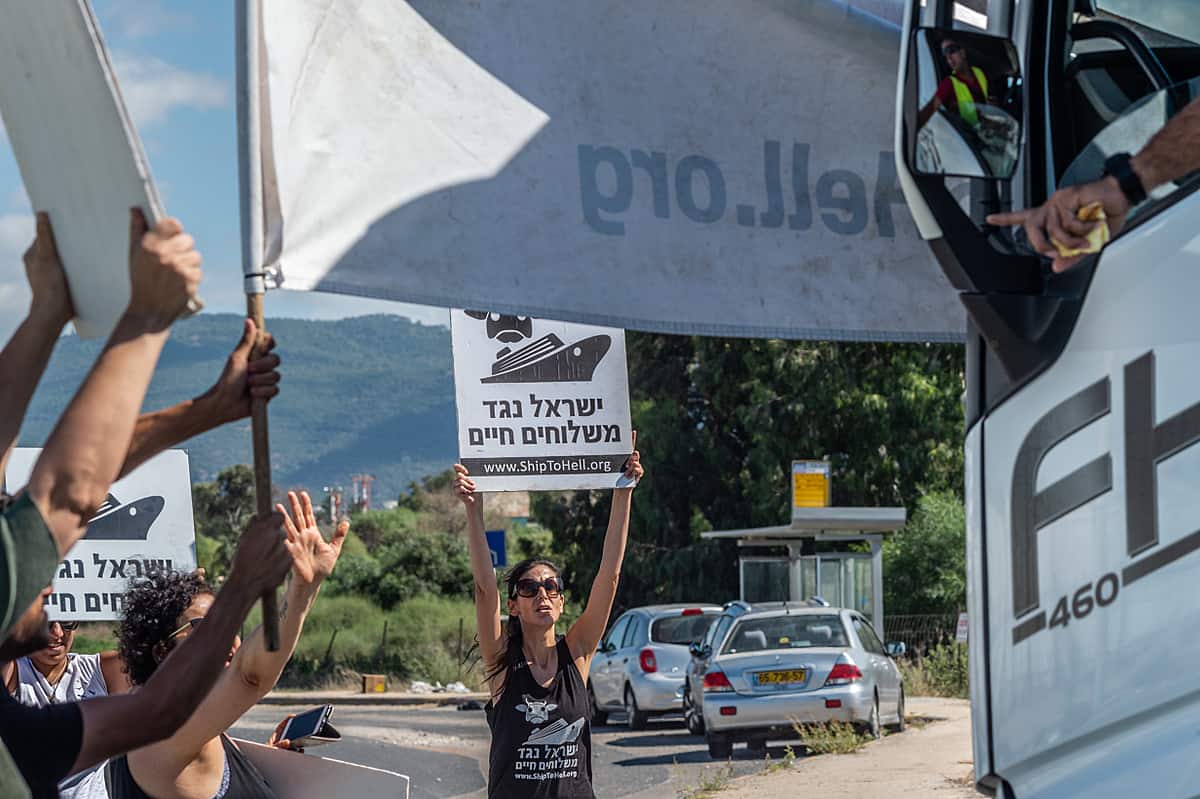 Meanwhile in the United States the US Department of Agriculture reports exports of live cows, pigs, sheep and goats. In an article in The Guardian, they write that in 2017 the United States imported 7 million farm animals, 5.6 million of which were pigs, mainly from Canada. These staggering numbers are for the animals being imported and exported. There are also millions of animals on transport trucks that do not leave the country but still travel from farm to slaughterhouse in heat waves and below zero temperatures. Chickens, another abused species, often die in transport to the slaughterhouse due to overcrowding. The birds are packed together so tightly on top of each other it leads to injury and often death.

Unimaginable suffering occurs on sea vessels when animals are confined against their will. Up to 120,000 sheep or 25,000 cows can be held as captives on a ship and be forced to travel for up to five weeks by sea. It is also common for ships to be delayed and vessels crammed with animals held up for months. In December 2020, over 3,0000 cows were stranded in the Mediterranean for over three months after they left Spain. They were headed to Turkey with young Spanish bulls aboard two separate ships. According to an article in The Guardian, both ships were refused entry due to fears the bulls were infected with bluetongue, a bovine disease. Over the course of many more weeks there was constant back and forth regarding testing the cow’s blood to have them cleared of disease. During this time the helpless animals were forced to endure endless suffering.

“Spanish veterinary officials complete and sign a report describing dire welfare conditions onboard the Elbeik. The report cites the Elbeik’s captain as saying that, of the 1,789 bulls originally loaded, 179 died during the journey. The bodies were chopped up and thrown overboard. Ten other carcasses were also found on board, the report says, and of the remaining animals, some are dying, while others are starving and extremely dehydrated.” – The Guardian

Heat stress affects farmed animals and during heatwaves and high humidity it’s so unbearable that animals on ships die on board. These animals lose the ability to cool themselves down and without relief from the intense heat their symptoms get worse. They become lethargic, start panting nonstop, have racing heart rates and often die. When I was bearing witness with the Save Movement outside a pig slaughterhouse near Toronto, I saw panting pigs gasping for air and overheating in the transport trucks. They looked so sad and helpless while panting for every breath and certainly did not deserve the fate that awaited them at the slaughterhouse.

Try to imagine thousands of animals on board a ship going to the bathroom several times a day. It’s a stinking mess – literally. If they want to lie down their only option is to lie on excrement and even risk being buried in it. They are literally swimming in their own faeces. If they collapse from exhaustion, they drown in it. Especially with high temperatures the untreated waste build up is completely unsanitary and out of control. Broken bones, injuries and diseases are common. The eyes and throats of these helpless animals burn from corrosive ammonia. Bodies of their family members that have already died in the putrid conditions decay around them. The fear they must experience is hard to even comprehend.

Animals Australia reports; “More than 100,000 litres of urine and faeces accumulates on a typical export ship every day sheep are on board. The ship won’t be ‘washed out’ until after they’ve disembarked.”

Human animals such as crew members on board are also exposed to dangerous levels of ammonia, carbon dioxide and highly flammable methane from the animals and their waste. The crew works in these filthy conditions daily. This can potentially lead to many diseases in human animals and non-human animals. PETA reported these diseases include ringworm and ‘scabby mouth’. “Other common diseases on these voyages include salmonellosis, a cause of diarrhoea; conjunctivitis of varying degrees; and leptospirosis, which is spread by cattle urine and can lead to kidney failure.” - PETA

Lack of fresh food and water

Factory farms load as many animals as they can into a single truck. They use electric prods and other cruel torture methods to force animals onto the truck if they don’t go willingly. Once on board, there is no space to move, and they are not given food or water for this journey.

Animals are often deprived of food and water for their entire journey when held captive in transport trucks. In a detailed analysis of Farm Animals in Transport, the following has been reported.

“Cattle are also injured and die in transport. Cows are often deprived of food and water, leading to dehydration. Cows also often defecate and urinate on the transport trucks due to stress. Evidence suggests that dairy cows in particular have a higher rate of death in cold weather and on longer journeys.” 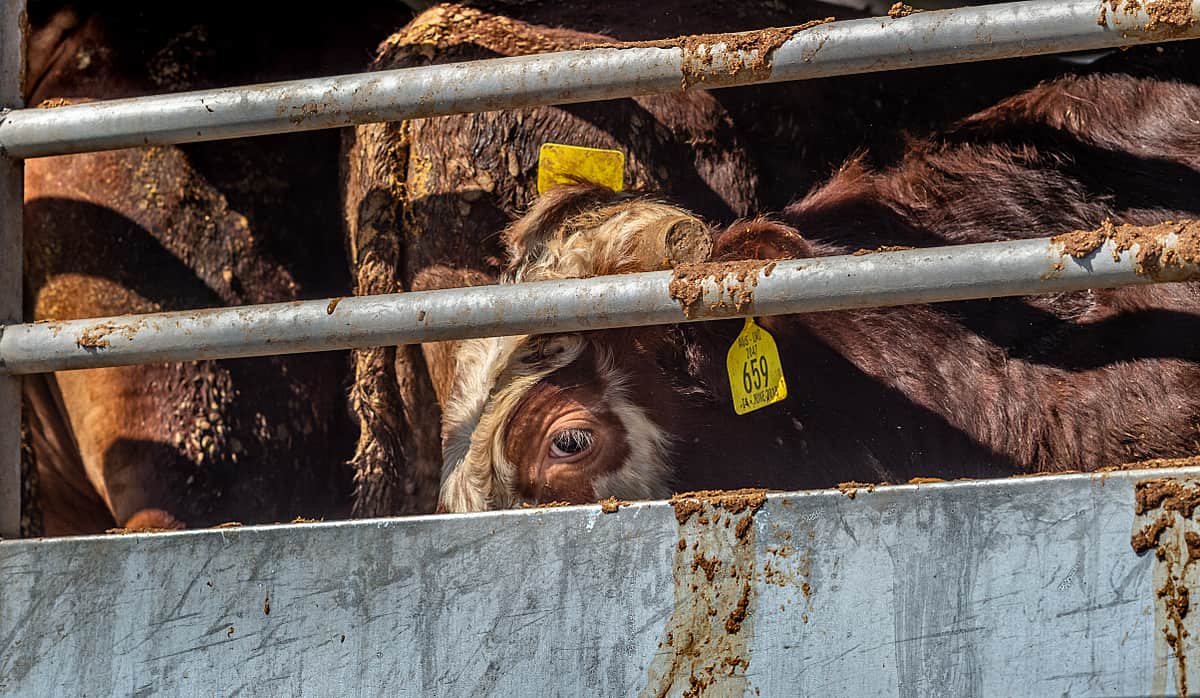 The conditions on board enormous ships are so extreme and the smell is overwhelming. The sheep or cows are packed so tightly they can barely lie down let alone access food or water. During the gruelling journey it is common for animals to be denied sufficient food and water, especially when stranded at sea for longer than intended, as is becoming more frequent. Often when they try to reach food and water they fall and can be trampled to death.

Bottom line? There is no humane way to send an animal on a voyage to be killed for meat, leather, or abused in the dairy industry. All live exports must be banned.