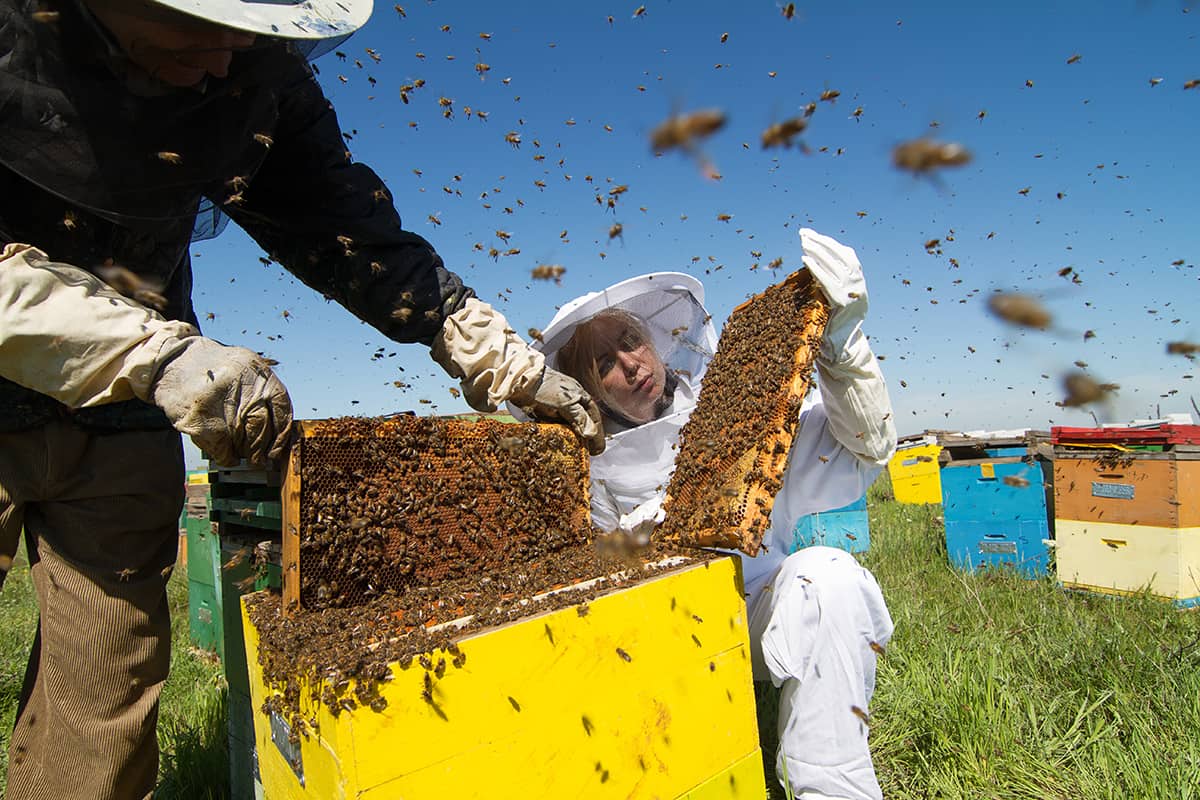 Whether or not vegans eat honey is a common debate. In fact, the topic has sparked many social media arguments with heated discussions on both ends. Over the years it’s been frustrating to see beauty products labelled as vegan that contain honey or beeswax. I have gone into restaurants that advertise selling only plant-based food with honey mistakenly listed as an ingredient. Instead of getting angry I take it as an opportunity to teach others what is wrong with the honey industry so they can make informed decisions moving forward.

Read on to find out details the honey industry doesn’t want you to know; reasons why we desperately need bees to survive; and what sweet alternatives to shop for instead of honey.

Bees are exploited on factory farms and treated inhumanely. Like other abused creatures on factory farms, bees are victim to stressful transportation, genetic manipulation and living in conditions that are not natural to them in the wild such as nests or their own hives that have not been tampered with. It is common practice for beekeepers to clip the wings of Queen Bees so she can’t fly free or escape. This is done to prevent swarming and then she is killed after a year or two. Bees on factory farms often have their legs ripped off by pollen collection trap doors while confined to their small unnatural environments. It has also been reported that Queen bees are artificially inseminated using drones (male bees) who will then die in the process, since they only mate once. There is certainly nothing natural about this despite what honey brands will lead you to believe.

If you haven’t seen Bee Movie from 2007 now is the perfect time to watch it. Bees work hard for their honey and can visit thousands of flowers daily to make their sweet treat. An average worker bee produces less than half a teaspoonful of honey in their entire lifetime! According to the Canadian Honey Council, it takes 556 bees to gather just one pound of honey and their average lifespan is about six weeks. Honey is a multi-million-dollar industry and the sheer number of beings being exploited is overwhelming. These highly social flying insects that are known to dance as a form of communication, obviously cannot give permission for humans to steal their honey. The honey they make contains essential nutrients for the bee’s survival and is their single source of food during winter months and poor weather. Bee farmers often replace the honey they remove from their hive with a cheap sugar substitute. This unnatural replacement does not contain the vitamins and nutrients bees need and they end up overworking to replace their missing honey. Furthermore, during the honey removal process many bees die after stinging the farmers or from harmful handling.

3. Save The Bees To Save The World

Sadly, bees are dying at a very alarming rate and the world needs bees to survive. There are several reasons bees are dying including climate change, global warming, use of pesticides (insecticide and herbicide) and the loss of flower meadows. Bees are responsible for pollinating plants and flowers and are relied upon for the survival of agriculture as we know it. They are certainly important species and pollinate crops that feed 90% of the world. Other animal species rely on the plants that bees pollinate too, making bees vital to the food chain. According to Britannica there are about 20,000 species of bees in the world and bees of all types are in decline. As for honeybees in particular, keep reading to learn about colony collapse disorder and how it affects them.

Honey bees are experiencing Colony Collapse Disorder (CCD) and it is very serious. This is a condition in which bees become disoriented, abandon their hives and the colony dies. Many of them leave their hive in search of pollen and do not return. Multiple factors seem to be at play and the exact cause is not known. As mentioned in Britannica, possible causes of CCD are poisoning from pesticides such as nicotine-based insecticides, infection of the bee colonies by pathogens or parasites and chemical contamination of colony food stores or beeswax. Beeswax is what bees use to make the cell walls of their honeycomb. They need it to survive, but we do not need it and can easily avoid using beeswax that is commonly found in products such as lip balms, lipsticks, cosmetics, crayons and candles. Instead of stealing from these tiny hard-working insects we should be doing everything in our power to ensure they are not exploited by humans.

Try these products to sweeten up your tea, baking, or recipes that call for honey.

How You Can Help

We are building a grassroots movement to protect some of the smallest beings we share this planet with and solve the climate crisis by helping bees survive. You can help by starting a Bee Save chapter in your city.

Get Social with Bee Save Movement