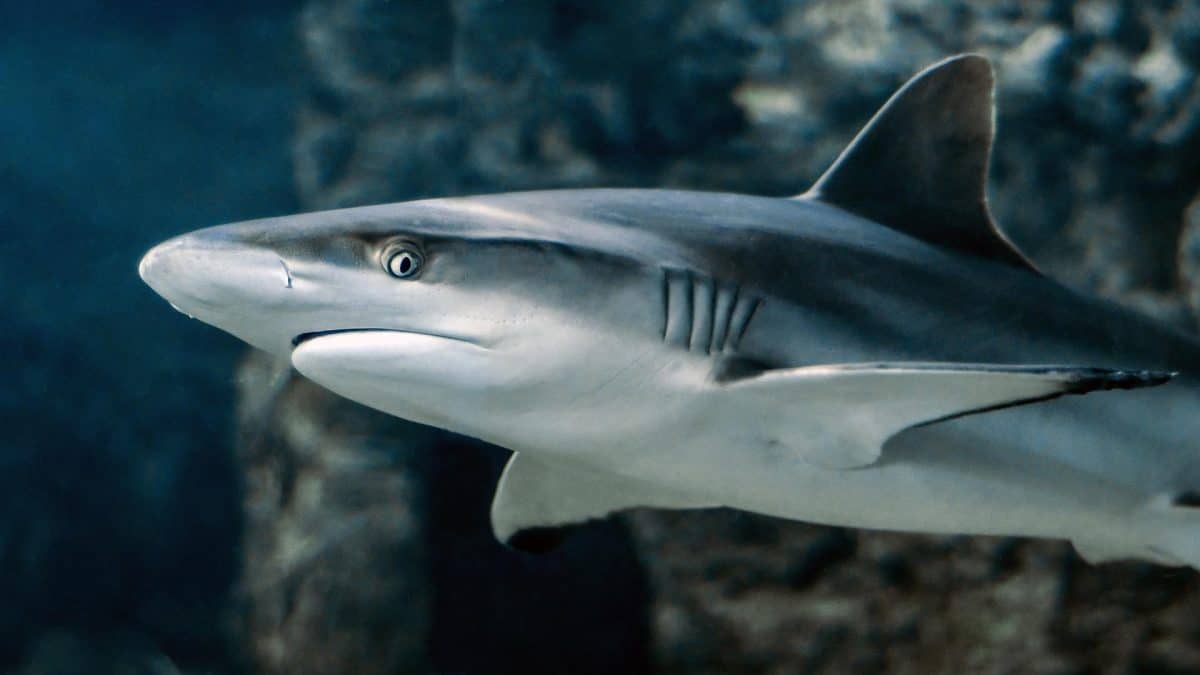 Sharks are under threat and we must not be silent.

Sharking finning has been a controversial issue for decades and in many countries it is now illegal. It’s also a very complicated issue because even where it’s banned people trade and sell their fins and many restaurants still serve shark fin soup illegally. Like many animal rights issues it is challenging to put an end to issues that are unmonitored and regulate what happens behind closed doors if we don’t know what is truly going on aboard fishing vessels. But what we do know for sure is that killing sharks for their fins is extremely cruel, unsustainable, and wasteful. Keep reading to learn more and find out what you can do to help sharks keep their fins where they belong - attached to their bodies. 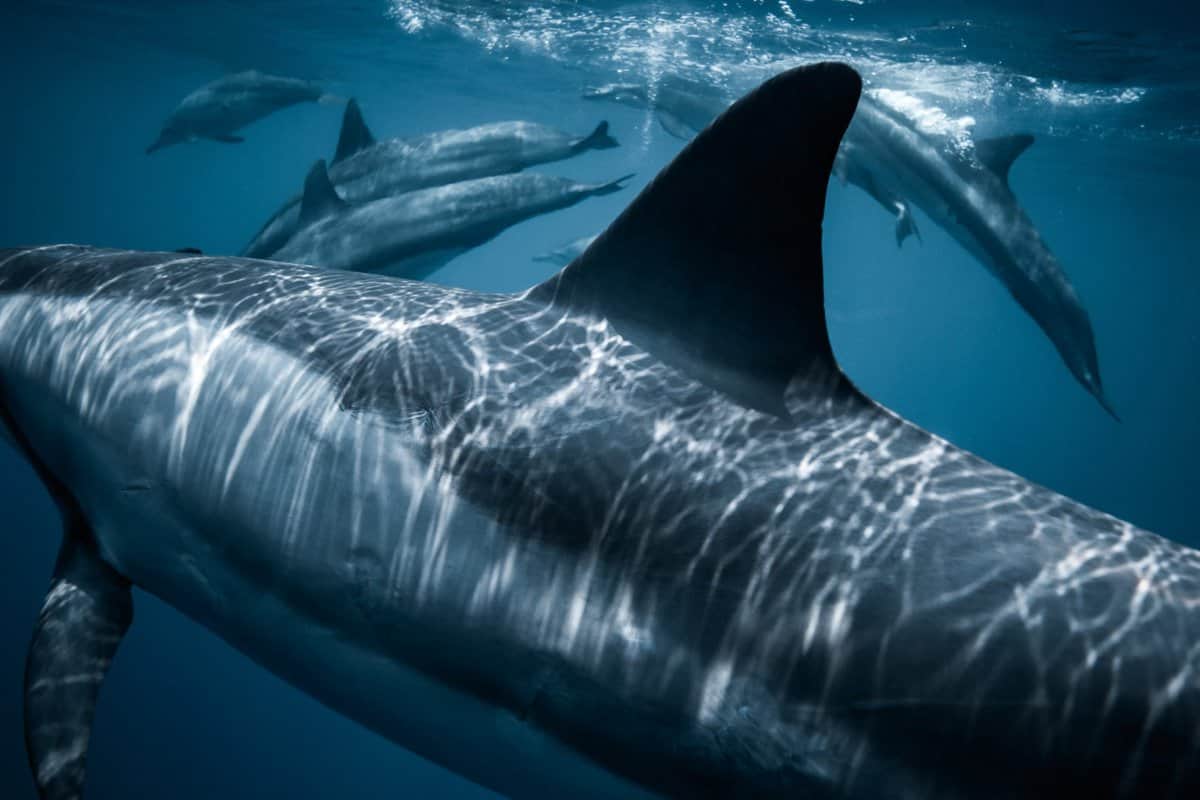 What is shark finning?

Shark finning is the act of slicing off a shark’s fins and dumping their mutilated bodies back into the ocean while they are still alive. Sharks of all ages have their fins violently cut off and their thrashing bodies are tossed away like garbage. Sharks die a slow painful death by bleeding profusely and drowning, starving to death as they can’t swim to get food, or they are eaten by other fish. With fishing technology more advanced now than decades ago, shark finning has increased, despite it being illegal to trade or purchase in many countries. Shark finning is still a big business and a multi-billion-dollar industry.

What are shark fins used for?

Shark fins are used for shark fin soup, which is known as a delicacy and status dish in some Asian countries, particularly China. Shark’s fins are shredded and used to provide texture in the jelly-like soup that is often served at big family gatherings such as weddings. There is no nutritional value for humans eating the fins and they are practically tasteless. Shark fins are used in traditional Eastern medicine as well as in some supplements in Western countries and in certain cosmetics. Shark cartilage has been found in products being marketed to cure various ailments and diseases such as cancer, however it has not been proven to be effective, according to WebMD.

According to Sharkwater, a movie made by brilliant Toronto filmmaker and conservationist Rob Stewart before his tragic passing, “Each country with a coastline is responsible for laws and regulations pertaining to fishing in their waters.” – Sharkwater  This award-winning documentary exposes the exploitation and corruption of the shark hunting industry. Sharkwater: Extinction (the second film) follows Stewart as he exposes the illegal shark fin industry and political corruption behind it, can be streamed here.

Researching this article took me down many confusing paths trying to figure out why shark finning is still happening and why cities around the world are still serving shark fin soup where it’s supposedly banned. I remember meeting up with other Toronto activists over a decade ago and plastering Toronto with “Ban Shark Fin Soup” signs to raise awareness and save future sharks from painful deaths. After dozens of petitions by grassroots organizations and persistent shark advocates like Rob Stewart, Canada banned importing and exporting shark fins in 2019.

The Government of Canada issued this release in 2019.

“Shark finning is a destructive practice that needs a strong and immediate response to stop the devastating impact on global shark populations…. Today, the Minister of Fisheries, Oceans and the Canadian Coast Guard, the Honourable Jonathan Wilkinson, alongside Humane Society International, Oceana Canada, and the family of Sharkwater director, Rob Stewart, announced that Parliament has adopted important amendments to the Fisheries Act (Bill C-68-An Act to amend the Fisheries Act). Through these amendments we are defining and prohibiting the practice of shark finning and banning the import and export, to and from Canada, of shark fins that are not attached to a shark carcass.  Shark finning refers to the practice of cutting fins from sharks, often while the shark is still alive, and then leaving the shark to die at sea.” – Government of Canada

Toronto is not the only city still selling shark fin soup despite legal bans. According to this 2019 National Geographic article, states such as California that banned shark finning were also still selling it illegally. California introduced their shark fin ban in 2013.

The United States banned sharking finning in 2000, first just in the Atlantic Ocean and Gulf of Mexico, but years later extended the ban to the Pacific Ocean. However originally they didn’t ban the sale of shark fins in the US, so it was still permitted on restaurant menus. But in 2021 on World Oceans Day, the Senate passed a ban on the US shark fin trade.

“Today, the U.S. Senate passed the Shark Fin Sales Elimination Act (S. 1106) — a bill that would ban the buying and selling of shark fins in the United States — as part of a broader legislative package known as the United States Innovation and Competition Act (S. 1260). Similar legislation (H.R. 2811) has been introduced in the House of Representatives and currently has more than 130 bipartisan cosponsors.” - Oceana

But being illegal doesn’t stop it from happening. US states have various penalties for violations to the ban but many restaurants throughout the country continue to serve shark fin soup. Animal Welfare Institute has a comprehensive list of restaurants still selling it and you can search by state. (There is another list for Canada.)

In 2020 The Guardian wrote about 26 tonnes of shark fins cut from the bodies of 38,500 endangered sharks seized in Hong Kong.

“Hong Kong is the largest shark fin importer in the world, and responsible for about half of the global trade. The fins sold in Sai Ying Pun come from more than 100 countries and 76 different species of sharks and rays, a third of which are endangered.” – The Guardian

Although selling and eating shark fins is legal in Hong Kong, there is still illegal trade happening. 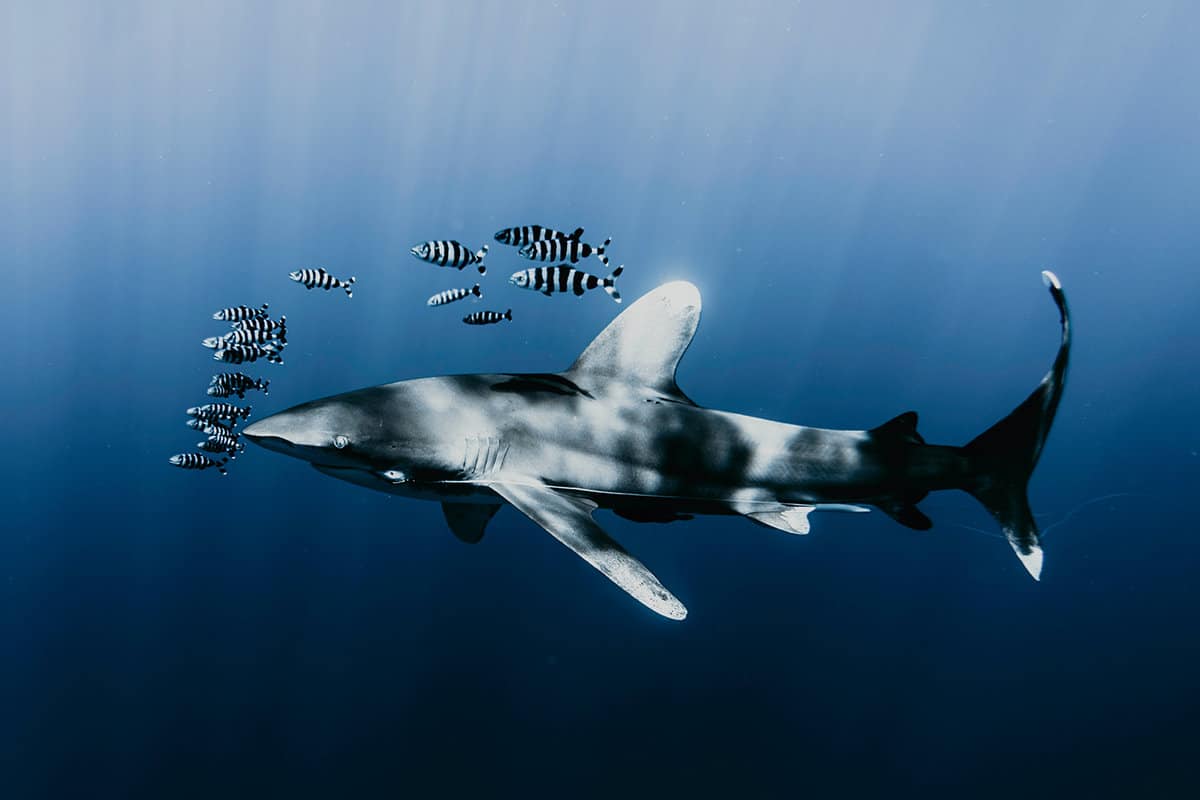 When will it actually end?

Reports reveal that the world’s shark populations have been shattered by human activities.

“The End of the Line,” a report by Oceana and WildAid, is an overview of the factors affecting the survival of sharks. It is a call to action to reduce the demand of shark products and implement solutions as part of a global effort. – Oceana

Organizations around the world continue to raise awareness about shark finning. If everyone opposed the sale of shark fins and stopped purchasing products containing shark fins there would be no market for it. Until that day comes we must continue to share information on shark finning and support organizations still trying to end it. Protecting sharks is not only the compassionate thing to do for them, but for our planet. Sharks keep ocean ecosystems in balance and indirectly help maintain coral reef habitats.

Many hotels and airlines have banned serving shark fin soup and several shipping companies no longer transport it. For a list of places as well as companies that continue to serve it, there is a comprehensive list by Animal Welfare Institute.

We must hold people accountable for continuing to serve shark fin soup in banned cities and keep pressuring government officials to take action against it worldwide. For 10 more ways to help sharks click here. Sharks are sentient beings and do not deserve to die a horrible death for a bowl of soup that will be gone within minutes.