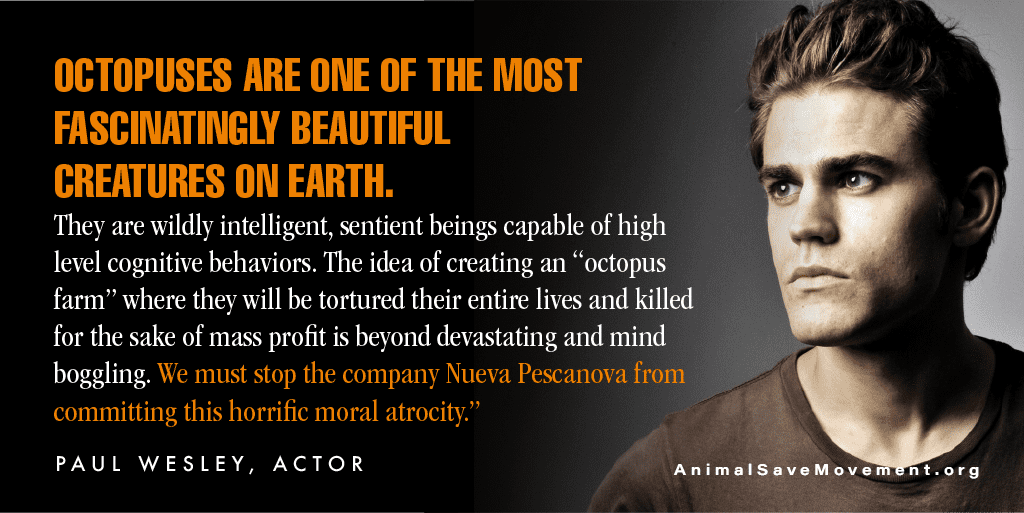 Vampire Diaries Star Paul Wesley has urged his 4.2 million followers on Twitter to sign Animal Save Movement and Plant Based Treaty’s petition to stop octopus farming. Paul said, “Octopuses are one of the most fascinatingly beautiful creatures on earth. They are wildly intelligent, sentient beings capable of high level cognitive behaviors. The idea of creating an “octopus farm” where they will be tortured their entire lives and killed for the sake of mass profit is beyond devastating and mind boggling. We must stop the company Nueva Pescanova from committing this horrific moral atrocity”.

This is not the first time Paul has spoken up for animals. In April 2021 he appealed to his 12 million followers on Instagram to cut down on animal products, lauding the benefits of a plant-based diet, “A plant-based diet is hands down THE single biggest way to reduce your impact on this earth."

Paul was speaking out after learning the Spanish company Nueva Pescanova has invested €65 million to build the world's first commercial octopus farm in Las Palmas, Gran Canaria, Canary Islands. The octopus farm would lead to a million octopuses being killed for food each year which they crudely measure in tonnes; 3,000 tonnes according to the company. Pescanova has so far refused to explain how the octopuses will be killed. However, wild caught octopuses are usually killed by methods such as clubbing their heads, cutting into their brains without anesthetic, asphyxiation in a net, and chilling in ice. No matter what method is being used, purposely breeding and killing octopuses is abhorrent. Octopuses are incredible creatures and should be treated with love and kindness, not imprisoned and slaughtered. They should never be stuck inside tanks, raised on farms, eaten, or abused in any way. These eight-armed geniuses are playful, inquisitive, sensitive, determined and just like every other animal on this planet, worthy of our protection. 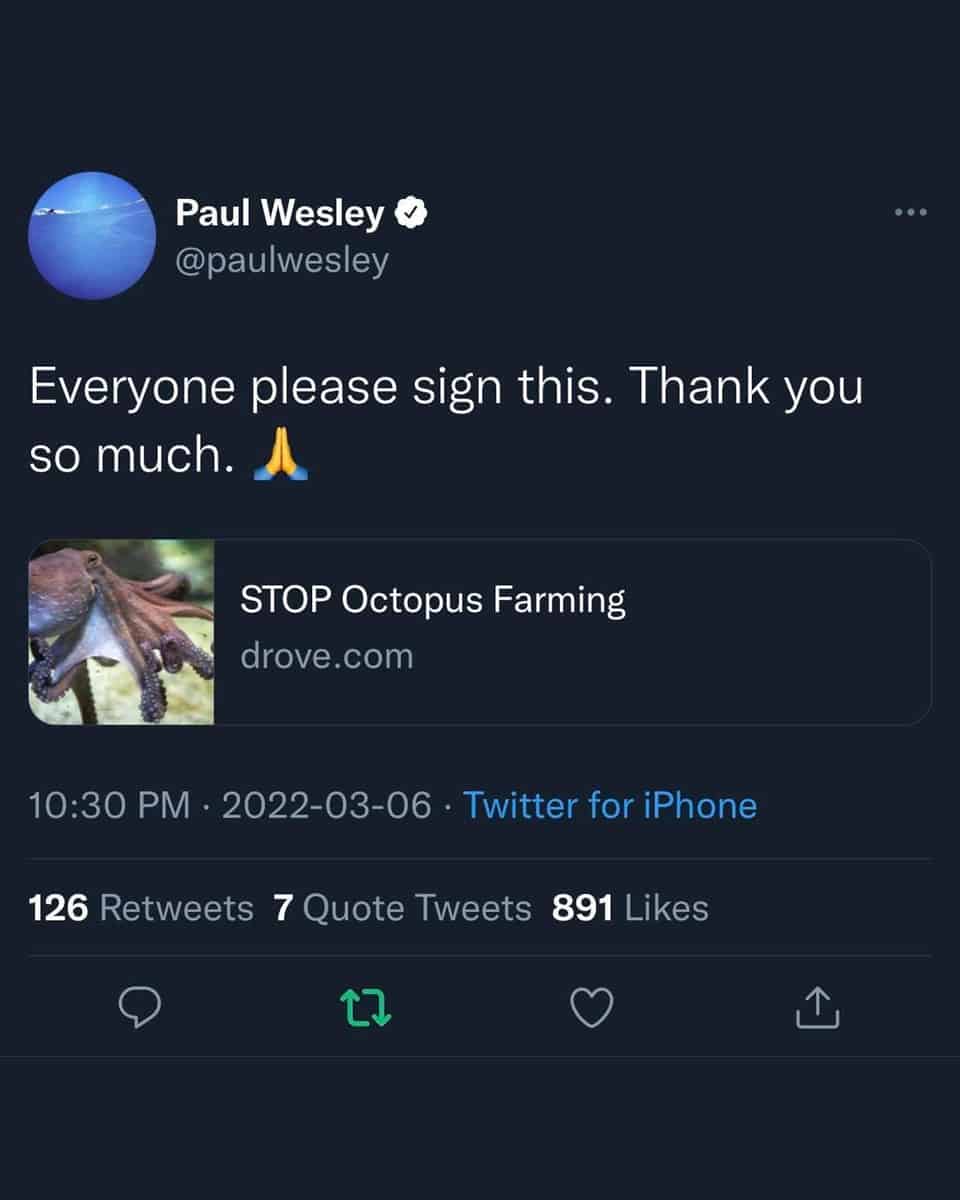 Did you know that octopuses have three hearts and a top speed of 27 mph? In addition to their large doughnut-shaped brain, each octopus arm has a mini brain. They are the world's most intelligent invertebrate and they have as many neurons as a dog; they are as smart as a golden retriever. There is no legislation in Spain or the Canary Islands that protects octopus welfare, and even if the farm had high welfare standards, there is no humane way to imprison or kill anyone against their will. They are sentient individuals who experience emotions and feel pain. Jennifer Mather, PhD, an expert in the behavior of octopus and squid at the University of Lethbridge in Alberta, says, “It's probable that the octopus's reaction to pain is similar to a vertebrate. They can anticipate a painful, difficult, stressful situation—they can remember it. There is absolutely no doubt that they feel pain.” Octopuses want to live and we have no right to kill them.

In 2012, an international group of cognitive neuroscientists, neuropharmacologists, neurophysiologists, neuroanatomists and computational neuroscientists signed the ‘Cambridge Declaration on Consciousness’, which included octopuses among those capable of consciousness. They declared that “Convergent evidence indicates that non-human animals have the neuroanatomical, neurochemical, and neurophysiological substrates of conscious states along with the capacity to exhibit intentional behaviors. Non- human animals, including all mammals and birds, and many other creatures, including octopuses, also possess these neurological substrates.” 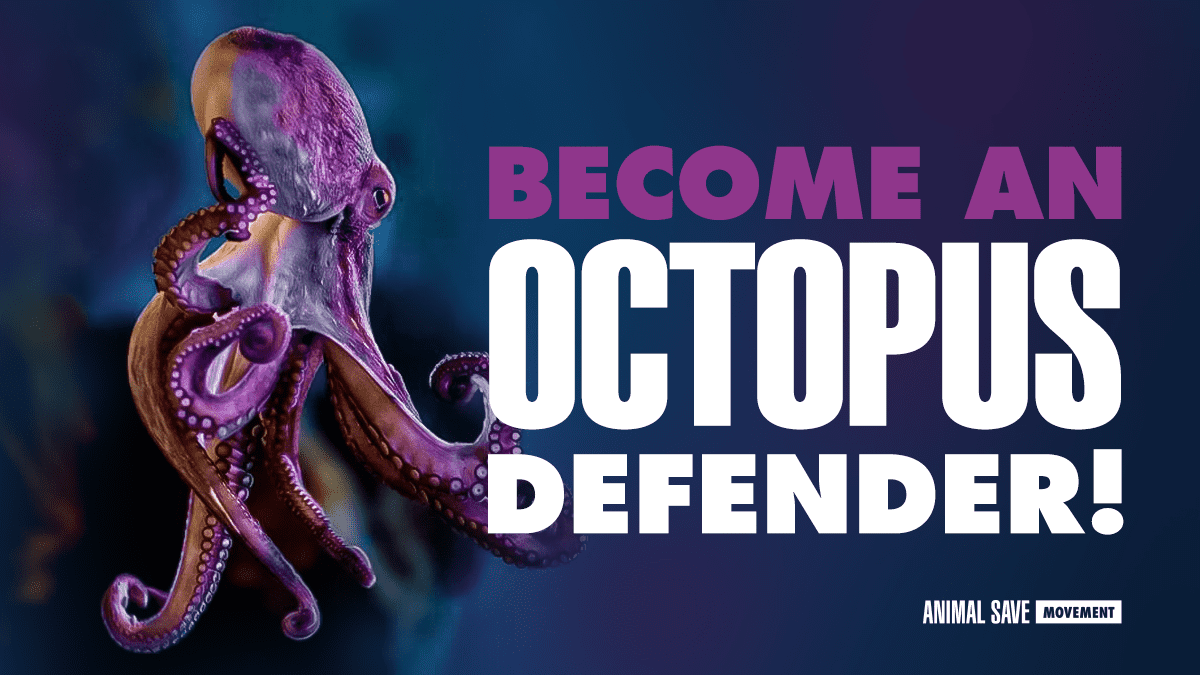 As the first demand of the Plant Based Treaty states, we should not be building new slaughterhouses or animal farms, but relinquishing animal agriculture facilities and not making the problem worse. The film Seaspiracy showed us; our oceans are in crisis. Farming octopuses is as unsustainable as it is inhumane. The proposal to open an Octopus farm would put more pressure on the ocean, disrupt marine ecosystems, and kill other marine life who would have to be caught to feed the octopuses. Octopus farming contravenes the EU Strategic Aquaculture Guidelines (SAG) because it will further deplete populations of fish communities living in the oceans.

Fortunately we are taking action to help octopuses. You can join Paul and over 30,000 other people by signing our petition and becoming an octopus defender!  We are demanding the Governments of Spain and Gran Canaria intervene to STOP this octopus farm from being constructed and ban the eating of octopuses. Instead they should officially recognise octopuses as sentient beings, which has already been done in the United Kingdom.

To learn more about Octopuses please read the Animal Save Movement blog, 'Five Interesting Facts about Octopus and why we shouldn't eat them'. You can also show your support by pledging to boycott and not visit The Canary Islands until the octopus farm proposal is dropped and octopuses are recognised as sentient beings in Gran Canaria and Spain.