As our animal rights movement mourns the loss of the inspirational activist Regan Russell, Toronto Pig Save activists have kept her name and memory in the media spotlight with high impact publicity stunts and thought provoking street theatre.

The death of Regan was an enormous shock to all. How has Toronto Pig Save been impacted by her death?

The violent death of Regan Russell is a huge loss, not only to Toronto Pig Save but also the global animal rights community. People from all over the world grieved her loss, held memorial vigils in her honour, and organized actions to raise awareness about her death.

Locally, people are devastated. Her death has left many traumatized. It is still unbelievable that Regan is no longer with us. Vigils without her are no longer the same. She used to stand at the gate of Sofina Foods’ Fearmans pig slaughterhouse every week with her bright orange sign that read, “All animals need protection under the law.” Her loss is so deeply felt at every event.

What is the Regan Russell Pressure Campaign and why it’s so important?

The Regan Russell Pressure Campaign started on July 17 2020, almost a month after Regan’s death, with a march for justice in Toronto. It took the first few weeks following Regan’s death for us to process what had happened. It was extremely difficult. Days were going by and in the aftermath the focus was on memorials and vigils in Burlington and around the world. We felt that we needed to stand together and start a strategic campaign in her name to amplify the story of her life and violent death, advance the causes that she fought for, challenge ag-gag Bill 156, and demand justice for her. We felt it was the only way to ensure she did not die in vain.

The campaign is important because it is not only furthering Regan’s mission of animal rights but also raising public awareness about the institutional violence perpetrated by the industry and the fact that those financially invested in the exploitation of animals will go to any extent to stop, harm, or even kill anyone who comes in their way. Ag-gag Bill 156 is the perfect example of this – the more you dig into it, the more you understand how desperate the animal agriculture industry is. They will try and stop anyone who exposes their dirty secrets, from blowing the whistle on violence against animals on farms to simply taking photos of farmed animals in transport trucks. A progressive democratic society celebrates whistleblowers and activists, it does not punish them. 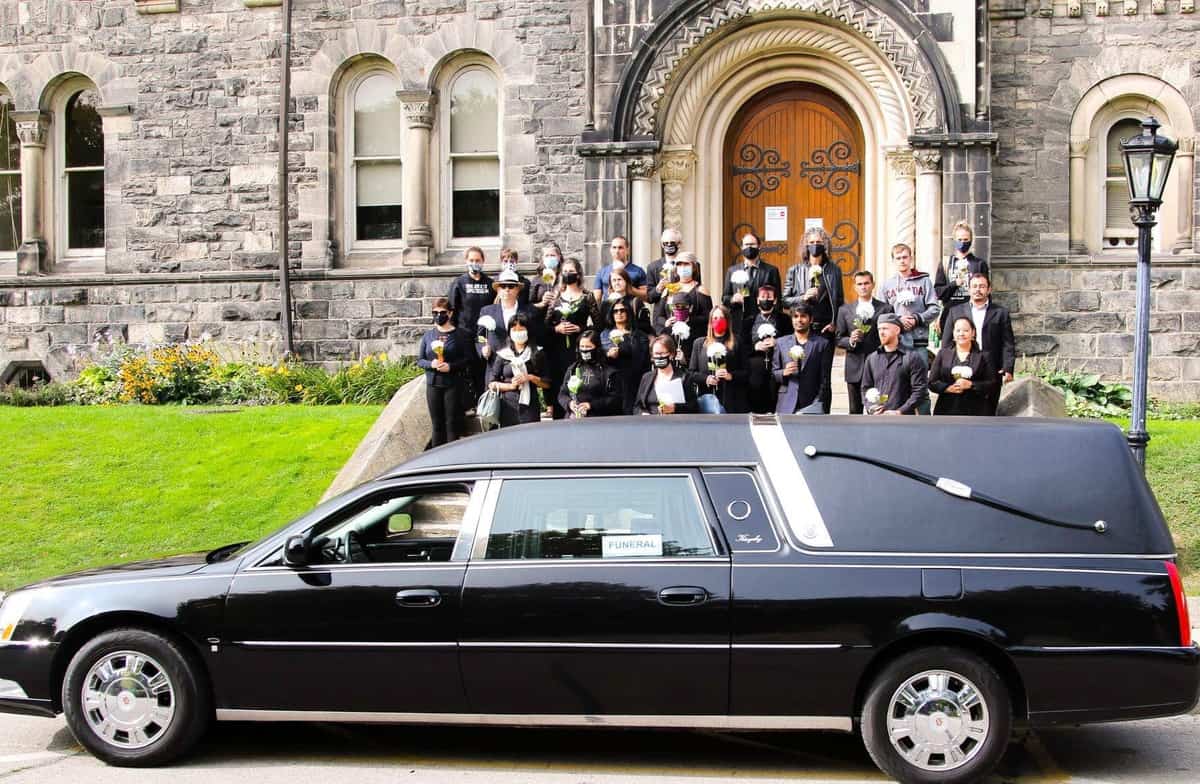 What actions have you organised so far?

There have been five successful high profile actions so far: Three marches – in Toronto, Burlington, and Hamilton – demanding justice for Regan, and two rallies – one outside Halton Regional Police Services Headquarters when Regan’s killer escaped criminal charges, and the other outside of Queen’s Park Ontario legislature in Toronto to demand the repeal of the Conservative government’s ag-gag Bill 156.

Through this campaign, we have been more creative than ever, we are not shying away from being political, because, let’s get real – Regan’s death is political. She was run over and killed two days after the ag-gag bill 156, which is aimed at punishing activists such as Regan, became a law. She was there that day protesting this law. She was the first human victim of it.

We are adding political theatre to our campaign and have been super successful so far. Yes, holding signs is important, but dramatizing an act helps people make the connection to the story you are trying to convey. We held a die-in at the intersection of College and University in Toronto during the march for justice for Regan where people laid down in the middle of the road with fake blood all over their faces and bodies. We played the audio of Regan’s poignant quotes as well as the agonizing screams of the pigs in the background, this dramatized the brutal violence Regan endured and what any peaceful activist can experience under this draconian law. 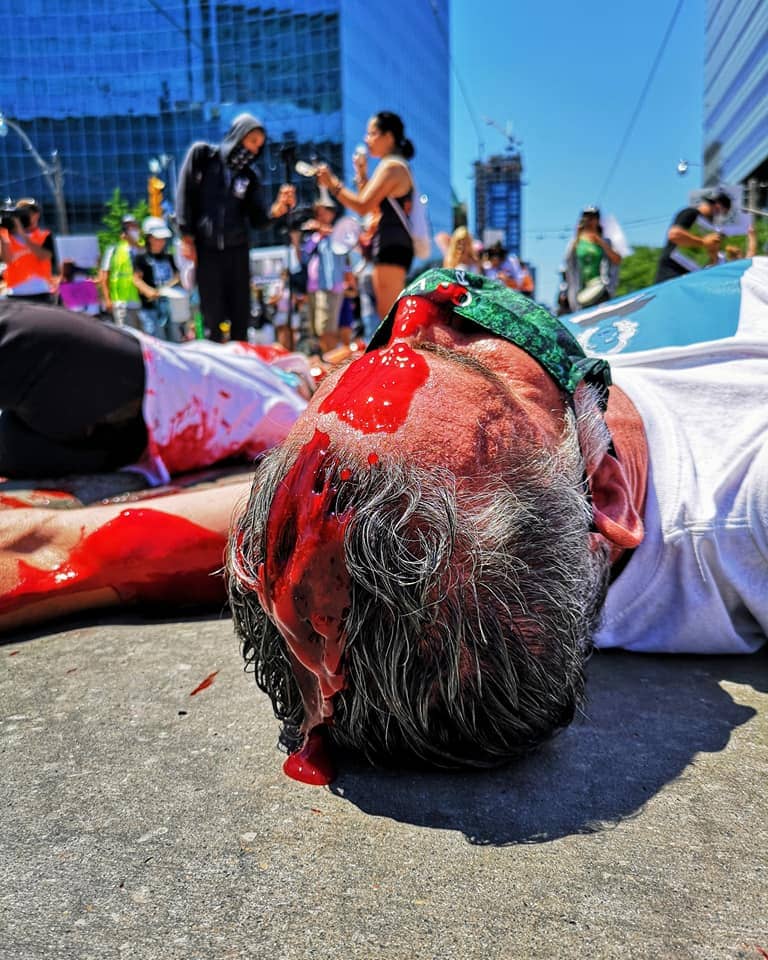 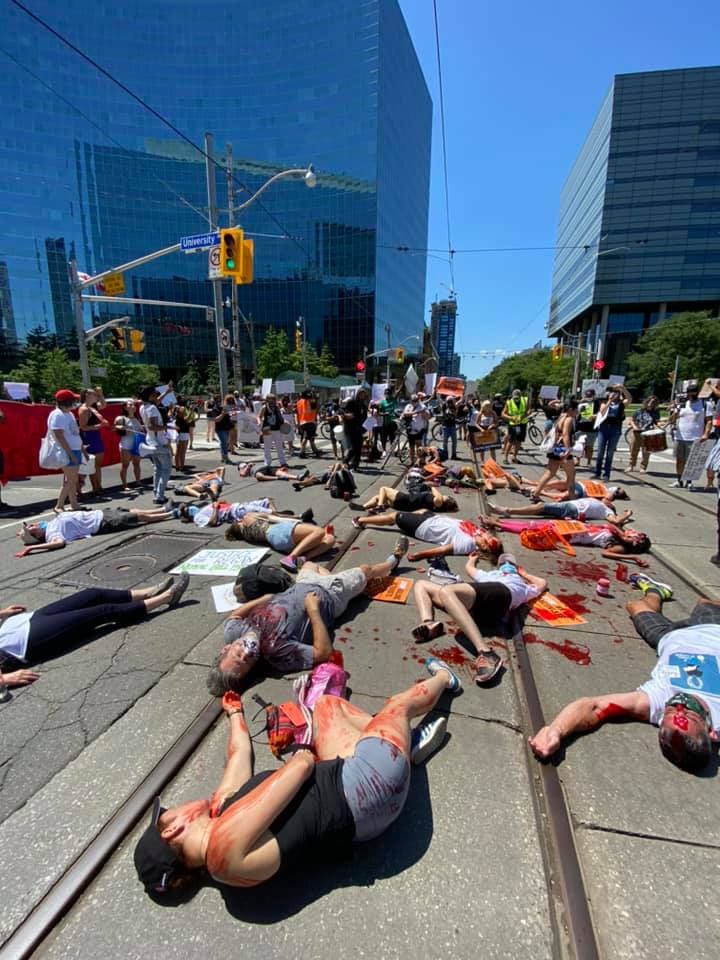 What people really loved about this campaign is the funeral processions we held. After the march in Hamilton, activists dressed in funeral costumes and carried a casket made by a campaign coordinator, and took it to the office of conservative MPP Donna Skelly (Flamborough — Glanbrook) to remind her of the impact of her vote in favour of the bill on Regan Russell, whom she knows personally. That same day, we also visited the office of NDP leader Andrea Horwath (Hamilton Centre) to thank her for her support for Regan and in opposition of Bill 156. We celebrated Regan’s life outside her office with a Harlem Shake.

What has been the response to the campaign so far?

We have received incredible support from the public throughout the whole campaign. Nearly everyone we have spoken to sympathizes with Regan’s story and recognizes the need to abolish ag-gag laws.

The media love our actions. We have had lots of positive coverage from big news outlets like CBC, CHCH, BlogTo , etc.

The actions have also inspired “non-activists” to become activists. We see new faces at every action. People want to get involved and do something because they know if they don’t, their fundamental rights are under threat. If you want to get involved feel free to contact Toronto Pig Save.

The violent death of Regan Russell has brought the community together to fight even harder for the animals in her honour. It is a holistic campaign with big goals that help everyone.

Toronto Pig Save is campaigning for a Regan Bill of Animal Rights that recognizes the personhood of non-human animals, ensures the right to demonstrate, including holding peaceful vigils and bearing witness, protects whistleblowers, defunds animal agriculture and provides subsidies for plant-based food manufacturing. 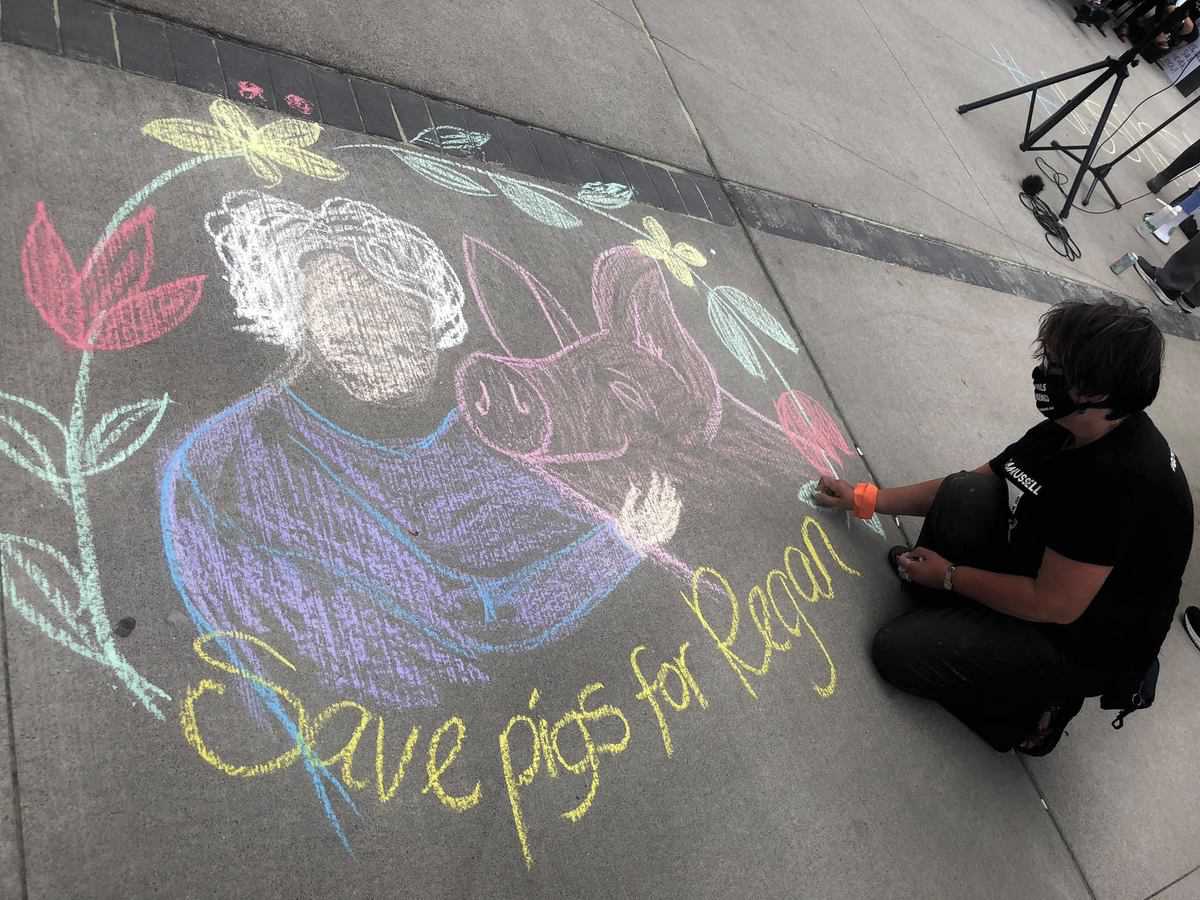 What are you planning next and what is your strategy going forward?

Although we had paused for a bit due to the spike in COVID cases, the planning for future actions is underway. Our strategies going forward include a digital media campaign to create public involvement in Ontario in the campaign. This means you don’t have to be in the Toronto area to support or participate in the campaign. Twitter, for example, is a great tool to keep the pressure on and you can join the tweetstorms from anywhere. You can write emails to MPPs and ask them to reconsider their decision, or even better, call or set up a meeting with them.

The team organizers for the Regan Russell pressure campaign are planning more political theatre and creative actions. The rally at Queen’s Park involved a hearse-led funeral procession – a very dramatic and engaging action that highlighted the severity of the issue. We believe being dramatic and strategic makes a powerful demonstration. Varun Virlan, Animal Save Movement’s digital media coordinator and a Journalism scholar, and Yarim Hinojosa a digital marketer who both understand the importance of experiential marketing and what type of stories the media like to report. We have to keep being creative to get mainstream media coverage.

Another important thing to focus on, is building a strong sense of community among activists. We have to make people feel that they are safe, valued, and appreciated. They should feel a sense of belongingness so they continue to remain a part of the movement and not burn out. 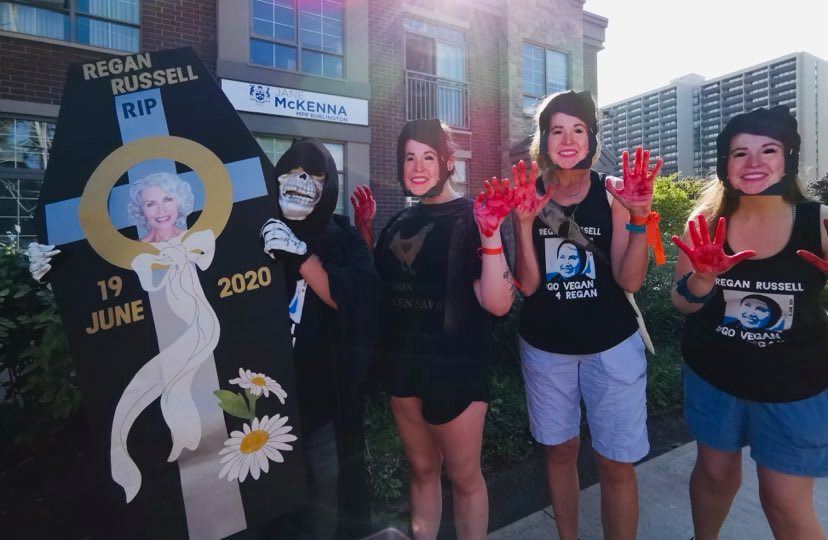 What else is TPS up to at the moment?

Toronto Pig Save is still holding weekly vigils for the pigs at Fearmans. Although a section of Bill 156 that makes it illegal to stop trucks is in effect, the activists still show up every Wednesday to bear witness to pigs and give them water without obstructing the trucks.

What can the global animal rights community do to help and support your actions?

The global animal rights community has been incredibly supportive, and we are extremely grateful for their solidarity with the campaign. The global AR community can help further our campaign by continuing to take actions in their own cities, so that we reach global audiences. There have already been many actions in her name. In India, for example, there was a free vegan food giveaway in poor communities in Regan’s honour. People have made music videos honouring Regan, including Regan’s Song by Scarlett Rescue, a vegan band. There was a global co-ordinated day of banner drops and activists have been flying an inflatable pig balloon with Go Vegan for Regan message. We would say that is the way to go!