The Hayek Hospital located in Beirut, Lebanon has become the first in the world to offer its patients a 100 percent vegan menu.

The decision came after hospital co-owner and founder of Lebanese Vegans, Georges Hayek, decided that it was ''well about time to tackle the root cause of diseases and pandemics, not just treat symptoms; for our health, for our planet, for our fellow earthlings''.

In a post on social media the hospital said:

“Starting today, March 1, 2021, our patients will no longer wake up from surgery to be greeted with ham, cheese, milk and eggs... The very food that may have contributed to their health problems in the first place.

When the CDC (Centers for Disease Control and Prevention) declare that 3 out of 4 new or emerging infectious diseases come from animals.

We then have the moral responsibility to act upon and align our beliefs with our actions. Taking the courage to look at the elephant in the eye.” 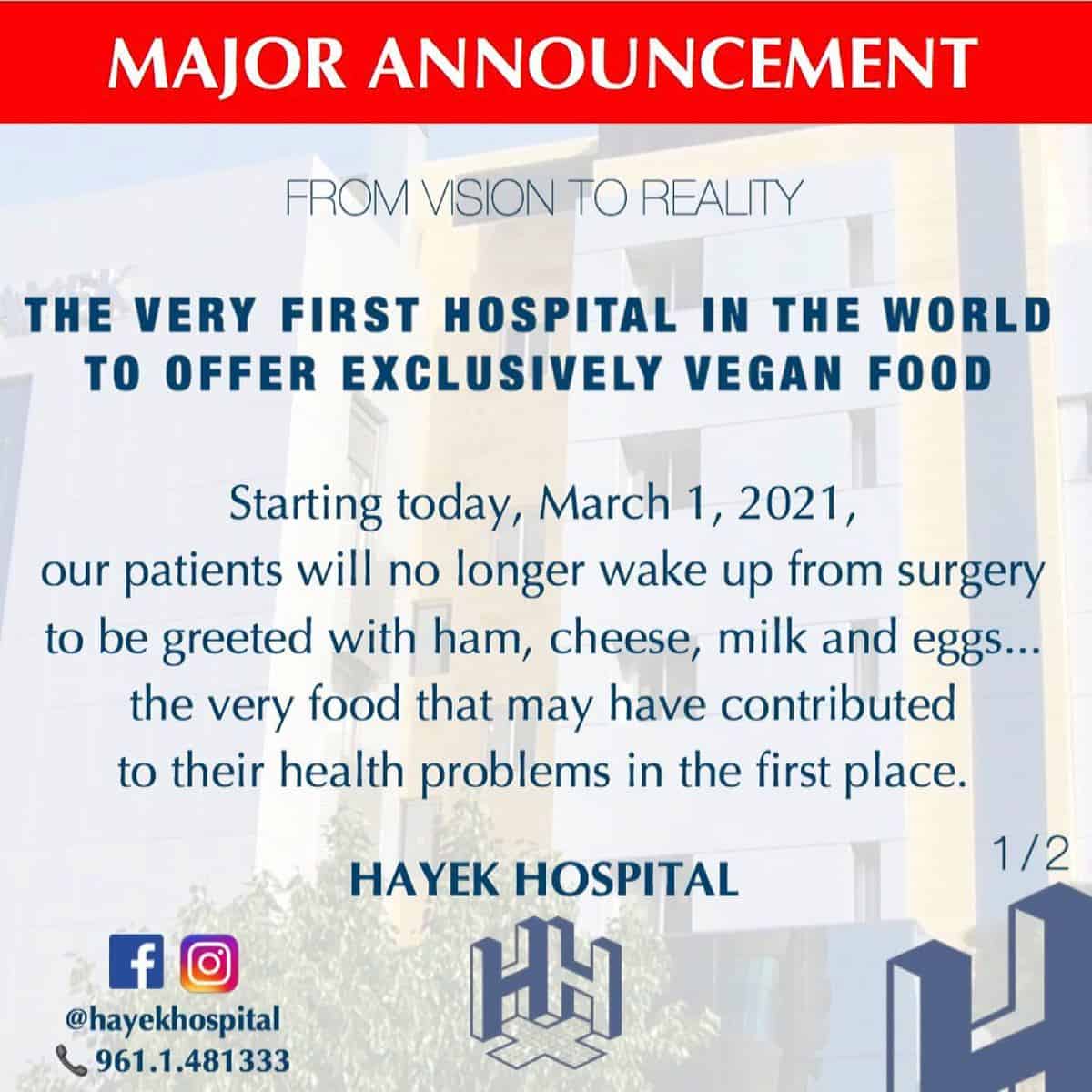 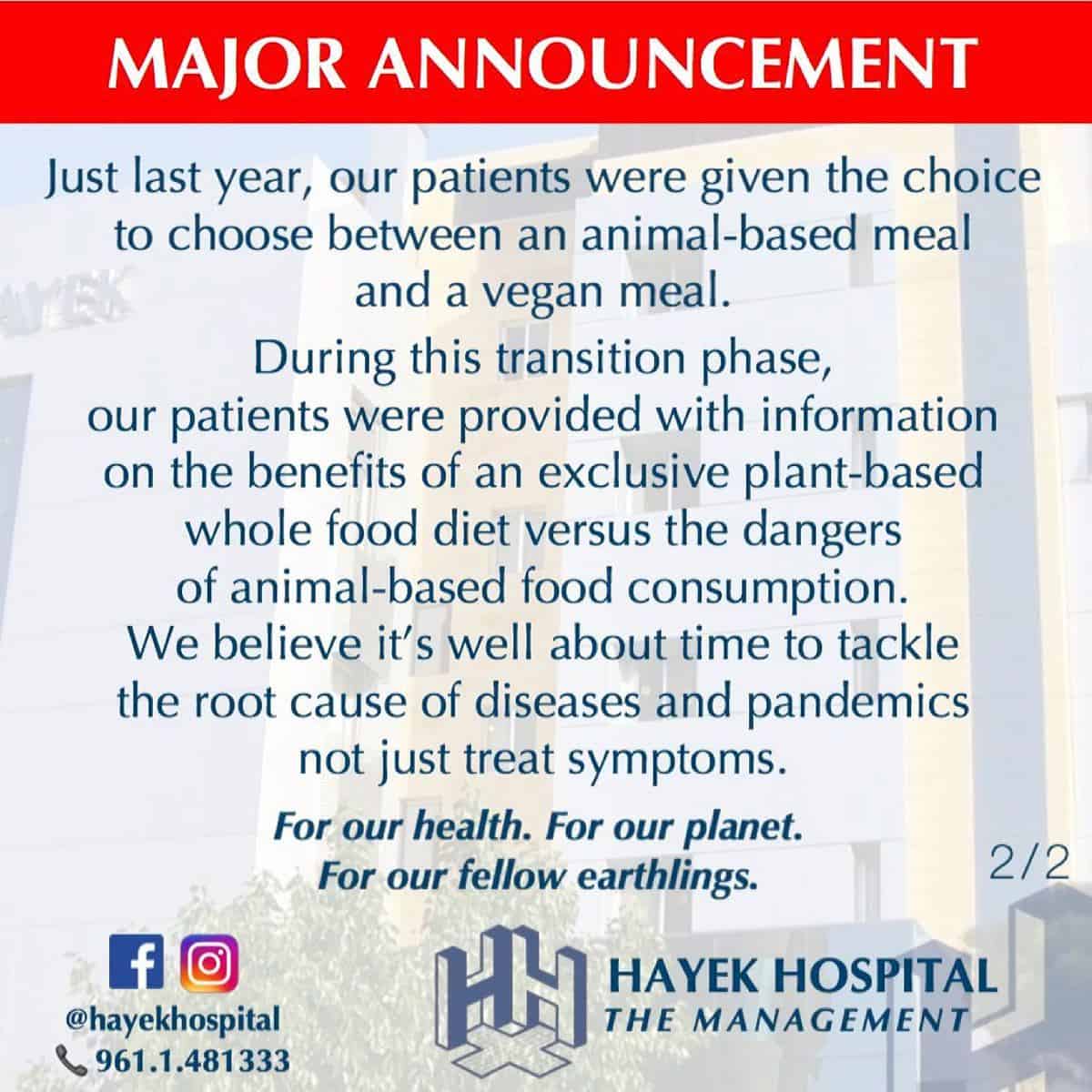 The news coincides with an Oxford University study published in the British Medical Journal on March 2, 2021 linking animal consumption to nine non-cancerous illnesses including ischaemic heart disease, diabetes, diverticular disease, colon polyps, and pneumonia. Those who eat chickens, turkeys and other birds were also at a higher risk of gastro-oesophageal reflux disease, gastritis and duodenitis and gallbladder disease.

A 2020 study by Loma Linda University found that drinking one cup of dairy per day may increase the rate of breast cancer up to 50 percent and for those drinking two to three cups per day, the risk increased further to 70 percent and 80 percent. First author of the paper, Gary E. Fraser, MBChB, PhD said the association between breast cancer and dairy milk may be down to sex hormones in dairy milk, since about 75% of cows are lactating while pregant. On dairy farms calves are snatched away from their mothers at birth so that humans can steal their milk and to maximise profits they suffer repeated forced pregnancies year in year out.

Eggs which are loaded with saturated fat and cholesterol have been linked to colon, rectal, and prostate cancer. One study found that people who ate the most eggs had an 80 percent higher levels of heart disease and a review of 14 studies published in the journal Atherosclerosis showed that those who consume the most eggs increase their risk of diabetes by 68 percent. 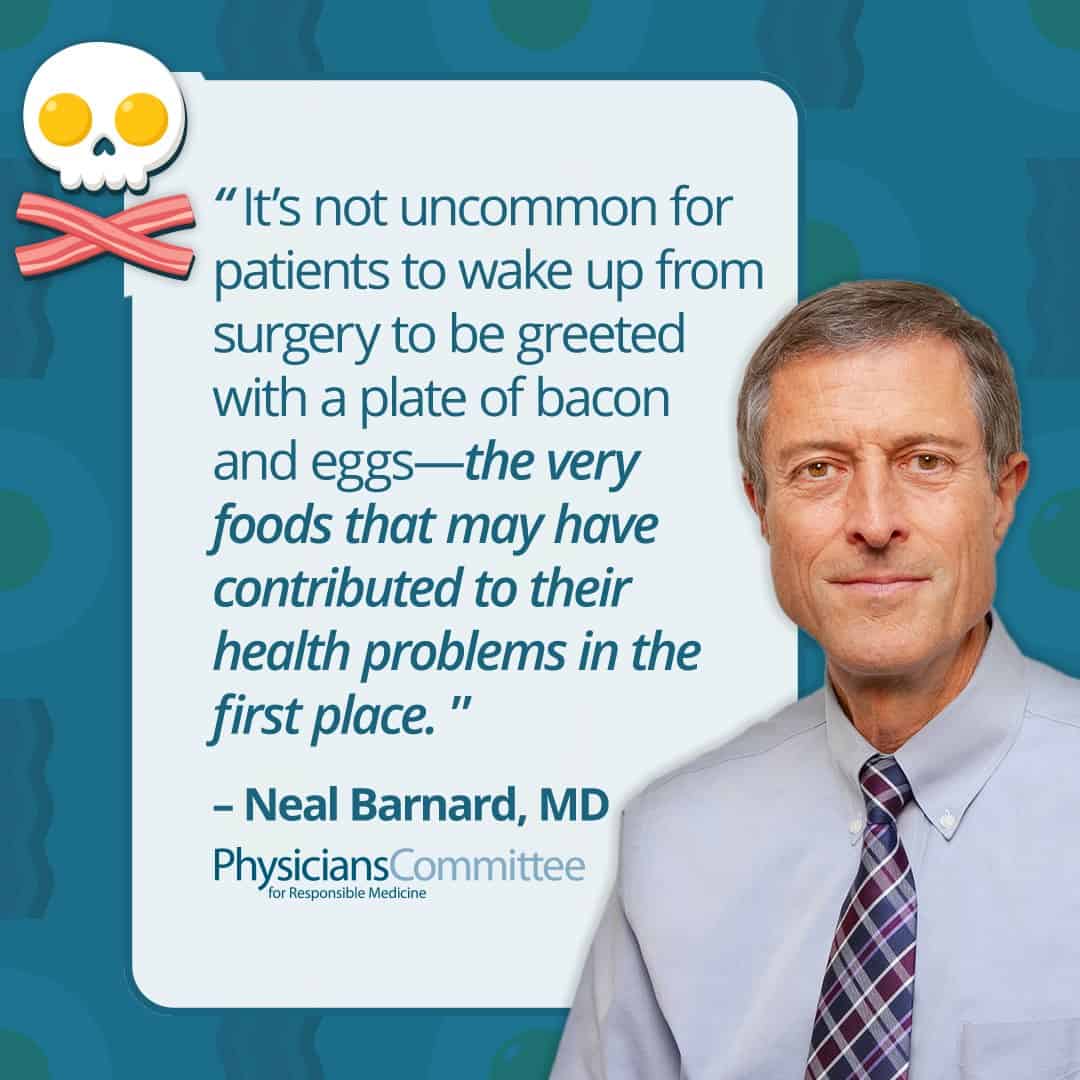 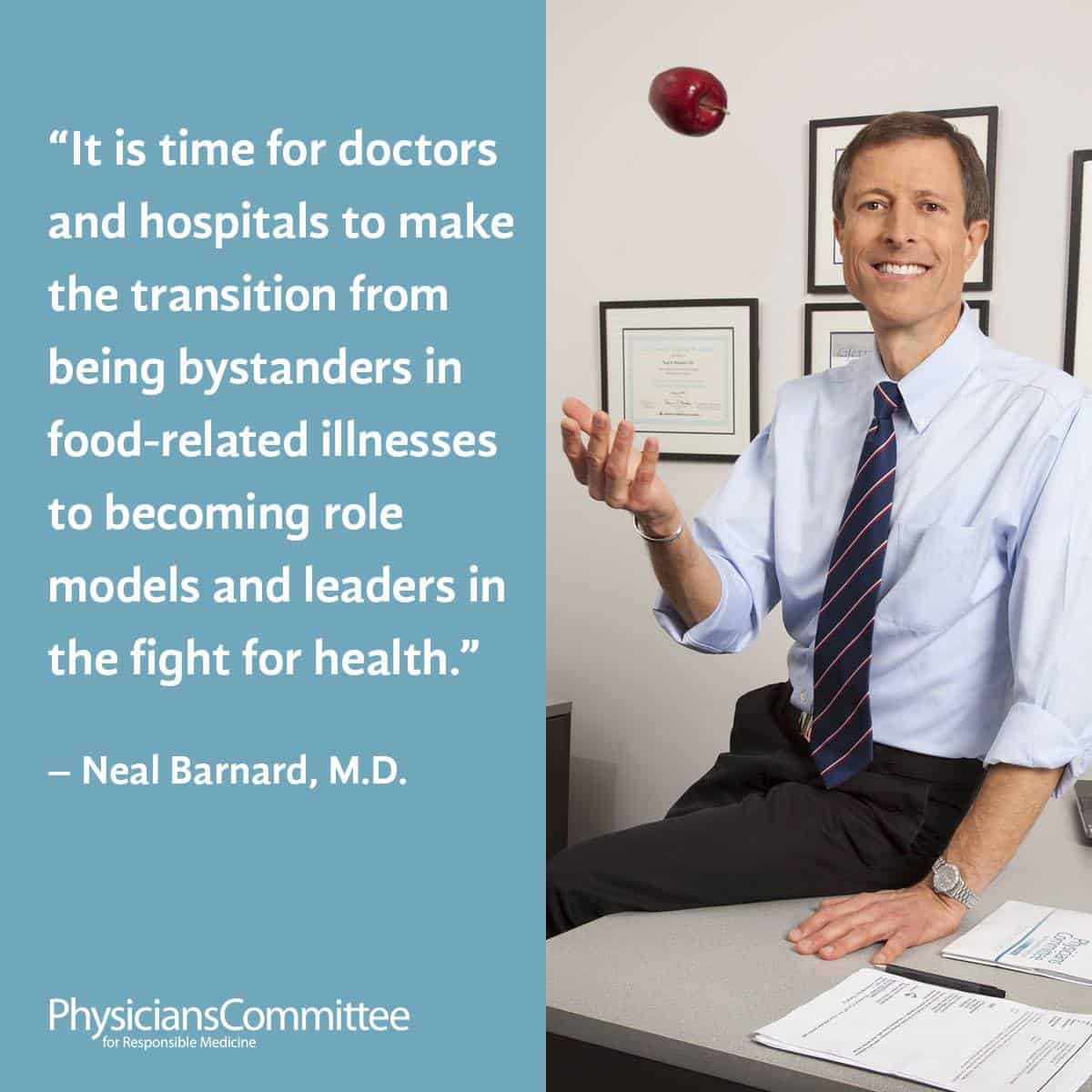 Physicians Committee for Responsible Medicine (PCRM) which combines the clout and expertise of more than 12,000 physicians say that all hospitals should be plant-based. They say healthy plant-based options can speed up recovery and prevent disease.

These calls are echoed by Plant-Based Health Professionals UK who are working to educate health professionals and policy makers on the benefits of a whole food plant-based nutrition in preventing and treating chronic disease.

Director of Plant-Based Health Professionals UK, Doctor Shireen Kassam says, “A healthy plant-based diet is associated with some of the lowest rates or chronic disease and a longer life.” Along with other NHS professionals she is working on the Give Bacon the Boot campaign with the aim of removing processed meat from hospital menus in the UK.

Georges Hayek became vegan after noticing the sentient soul in his dogs’ eyes, he realized the irrationality of cuddling and protecting one animal while eating the other. He said, “There is no difference between a dog and a cow, chicken, or fish.” Hayek soon discovered that not only was the consumption of animal products unethical, but it was also dangerous for human health. Putting those beliefs into action, Hayek Hospital is now leading the way with the plant-based healthcare revolution and we hope others will follow suit.

Get Social with Health Save Movement