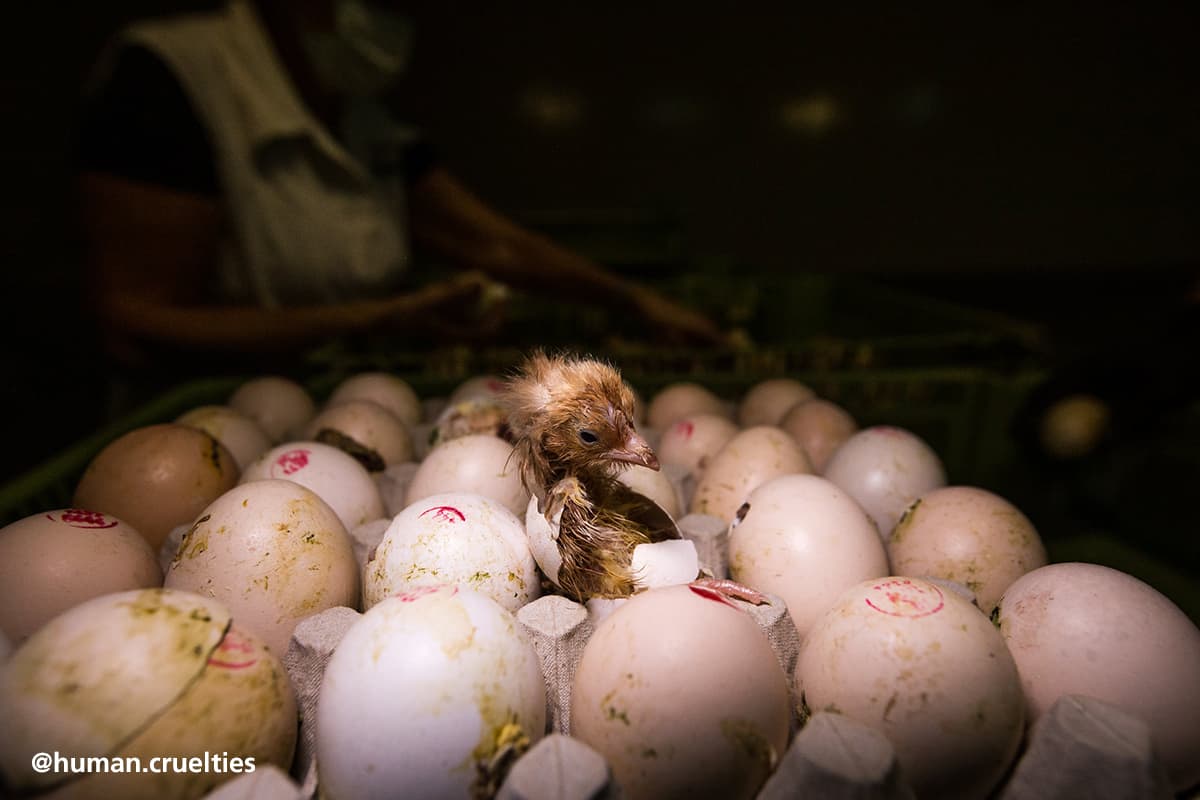 Chickens are some of the most abused animals on the planet. There are more chickens raised and killed for food than all other land animals combined. The abuse they face is horrific and there are no laws to protect them. Chickens live a life of misery on factory farms and are deprived of everything that is natural to them. The baby chicks want to be with parents and interact with other chickens. These smart creatures are inquisitive, they love taking dust baths, roosting in trees, happily scratching, stretching their wings and turning their faces to the sun. None of which they can do living in a filthy uncomfortable cage. But it doesn’t have to be this way. We as consumers hold the power. When we stop supporting industries that harm animals and stop purchasing meat, dairy, fish and eggs, these industries will shut down. Even if you are already vegan (thanks for making the compassionate choice!) you can share the below information about the egg industry with friends and family that still consume eggs.

Male and female chicks are separated shortly after birth. The male chicks are deemed useless by the egg industry as they can’t provide any profit because they will not grow up to lay eggs. No matter how it’s done, there is no humane way to kill an innocent baby chick that just wants to live. Killing methods include being gassed, ground up alive while fully conscious, sucked through pipes and electrocuted and tossed directly in trash bags to be suffocated and die a slow death. This happens throughout North America and beyond. When I was in Mexico I saw first hand unwanted baby chicks stuffed into tiny dirty cages piled on top of each other and chirping for their lives. The owner of the store was trying to make a few extra bucks so instead of killing the male babies they were being sold for food or livestock. Fortunately we managed to rescue two of the baby chicks and gave them a chance at a life of freedom. Only one survived but is now living his life in happiness at a sanctuary.

Female chicks have the end of their beaks cut off with a hot blade, called “debeaking” by the industry. This is done when they are quite young and with the idea that it will prevent them from endless pecking due to the stress of living in tiny confined battery cages. But chickens touch and taste through their beaks to determine temperature. As a result of this cruel “debeaking” they face chronic pain because their beaks have nerves and it is quite painful. Crammed into barren battery cages they cannot stretch their wings or feel the grass under their feet. Instead they must stand on a rough wire cage the size of a letter-sized piece of paper. There is no sunshine in these dark dreary sheds. These gentle creatures suffer so much and experience severe feather loss from rubbing against and standing on wire in addition to bruises and cuts. These battery cages hold about five to ten chickens all crammed in together – it is no way to live.

If your pet cat or dog gets sick you take them to the vet. Sadly, when a farmed animal such as a pig, cow or chicken gets sick on a factory farm their only option is to suffer or die. Furthermore, life in captivity always takes years off their lives. Chickens can live five to ten years in a natural environment. But after a few years in captivity egg laying hens are sold for slaughter when they can no longer produce enough eggs to keep up with industry standards. They are considered “spent” and worthless to the egg industry and are inhumanely killed. Hens cannot stretch their wings or feel grass under their feet. Photo: human@cruelties

4. They Are Often Starved And Denied Food

The more eggs chickens lay the more money the industry makes - and it’s always about the money. “Force molting” is a common process used by the egg industry to shock their already fragile bodies into another egg-laying cycle when their production declines. They cause stress to the hens through starvation to get them to produce larger eggs later on. In nature, chickens will lose their feathers (molting) annually in autumn, but forced molting on farms is a way they make this happen earlier. Besides starving them to alter their behaviour other practices include switching hens to a nutritionally deficient feed.

People For The Ethical Treatment of Animals (PETA) explains that hens today are artificially induced and selectively bred to yield a very high egg production. A century ago these hens would lay 100 eggs a year in captivity but today on factory farms they are laying more than 250 eggs annually. To put this in perspective, a wild hen living her life in peace would lay between 10 - 20 eggs per year. Hens lose about 10% of the calcium stored in their bones for every eggshell produced. Furthermore, like many animals on factory farms, chickens have been genetically manipulated to grow larger than they ever would if they were free. In fact, chickens in captivity on factory farms often grow so huge their legs cannot support their oversized unnatural bodies. At this point many are not able to reach their food or water and die from starving to death or dehydration.

6. Don’t Believe Misleading Labels – There Is Nothing “Humane” About It

As much as the meat and dairy industries try to trick customers with labels like “humanely raised”, organic, natural, or “free-range” - don’t be fooled by these misleading descriptions. Chickens on these farms often still face the same mutilation such as “debeaking” without painkillers, dirty and crowded conditions, and their flesh can still be contaminated with bacteria and other pathogens because they are living in their own excrement on top of each other. Keep in mind that “cage-free” does not equal “cruelty-free”. Just because a farm does not use battery cages does not mean they don’t raise them inhumanely. “Free-range” hens are not roaming free in green pastures playing in a dirt bath under the sun. Free-range only means the chickens have regular access to an outside area such as gravel or concrete for five minutes daily – they are hardly “free”. If food is truly humane it doesn’t come from an animal.

Backyard chickens have become popular in recent years but keep in mind it’s always better to live a healthy vegan lifestyle than to eat animal products. While the life of a backyard chicken is likely to be more natural and kinder than on a factory farm, the issue is that animals are not here for us to own and use as we please. Animals do not belong to us and of course a chicken cannot give us permission to take their eggs. Besides, why would you want to eat a chicken period loaded with cholesterol anyhow?

Bear Witness with Animal Save Movement

If you want to speak out against the injustice and cruelty to chickens join your local save chapter. Toronto Chicken Save bears witness at Maple Leaf “Foods” chicken slaughterhouse in Toronto that violently kills approximately 200,000 chickens daily. In a world where cruelty has been normalized we must be the voice for the voiceless.