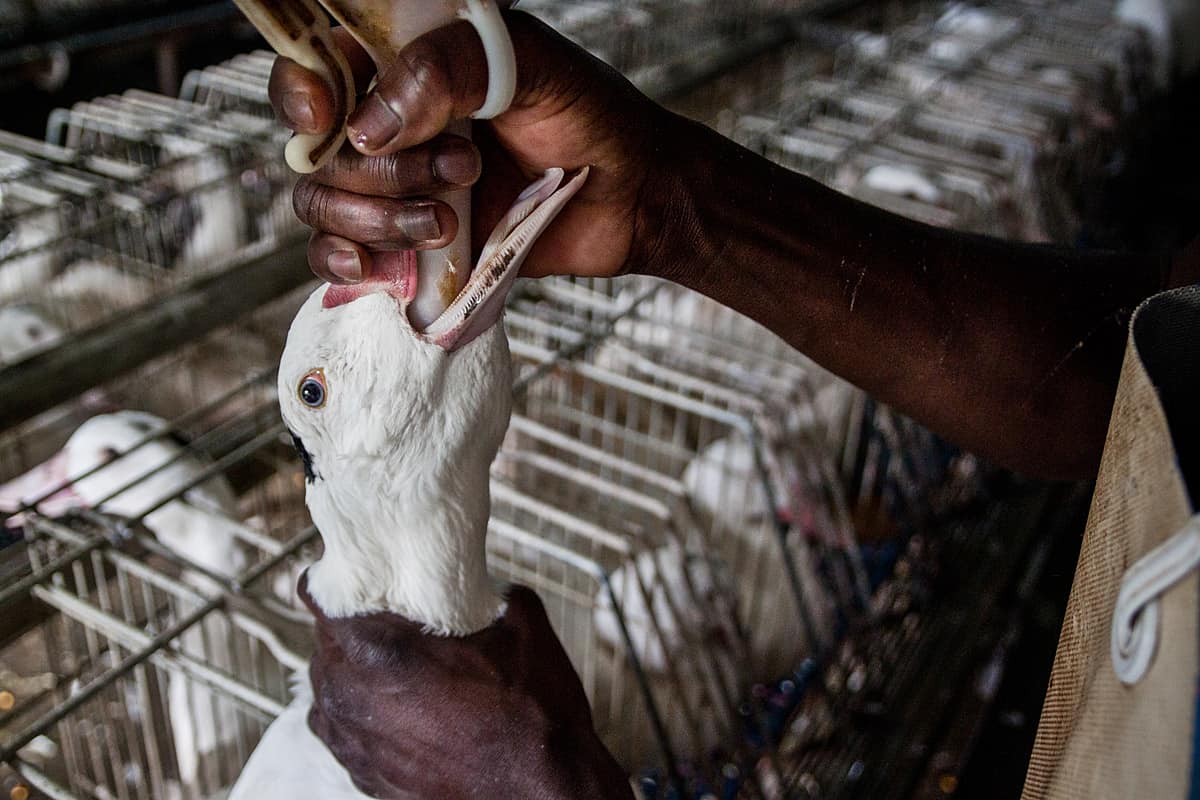 The fact that someone came up with the idea to force-feed ducks and geese enormous amounts of food in the cruelest of ways until their livers get to massive unnatural sizes and then kill them is outrageous and cruel. The fact that it became an overpriced “delicacy” in French cuisine and later around the world is equally as outrageous. They call this contentious force-feeding and fattening up of birds to be eaten, foie gras. Translated from French it means “fatty liver” and is often sold as a whole liver or made into pate or mousse at restaurants.

But after years of backlash from animal activists it has become highly controversial, even among Chefs. The growing awareness of the unethical nature of foie gras has become mainstream and people are choosing not to exploit these innocent birds, but we need to do more until it’s off every menu.

Even if you are already vegan or on the path to being vegan, it’s important to learn the facts so you can share this information and educate others. Together we can make a difference for ducks, geese and all animals being exploited by the food industry.

It’s a life of horror for the victims

Foie gras is produced by shoving a pipe down a bird’s throat and violently stuffing food into their bodies. The duck or goose liver literally needs to be nearly 10 times its normal size so the foie gras has a fatty consistency.

“…workers shove pipes down the throats of male ducks twice each day, pumping up to 1 kilogram of grain and fat into their stomachs, or geese three times a day, up to 2 kilograms daily, in a process known as “gavage.” Rupturing of the stomach and other internal organs as well as a plethora of other ailments are common among birds during the production of foie gras. - PETA

Many of the birds suffer puncture wounds from the feeding tubes and gavage techniques and it can be fatal. The birds are usually held by the neck so the feeding pipe can be thrust down their throat and the food violently pumped in.

The Humane Society of the United States reports the following;

“At the first force-feeding, 180 g (0.4 lb) of food is forced into a duck, and by the last feeding, the amount is increased to 450 g (1 lb), injected in as little as 2 seconds.22 Reportedly, if the corn mash becomes lodged in the bird’s esophagus, a stick is sometimes used to force it down.23 This quantity of mash, injected twice daily, is much more food than ducks eat voluntarily.” - HSUS Report: The Welfare of Animals in the Foie Gras Industry

After two to four weeks of force feeding their livers can no longer function normally. Toxins build up in their frail bodies and they go into a diseased state called hepatic lipidosis. In addition to the feeding tube torture, the birds endure a similar fate as other animals on factory farms in captivity. They cannot engage in their natural behaviours such as swimming, flapping their wings, and resting comfortably. Some birds can’t even stand up properly because they have been force fed so much their livers become engorged and distend out of their abdomens. The birds become highly stressed and terrified of the humans force feeding them.  This may result in them tearing out their own feathers or attacking each other. 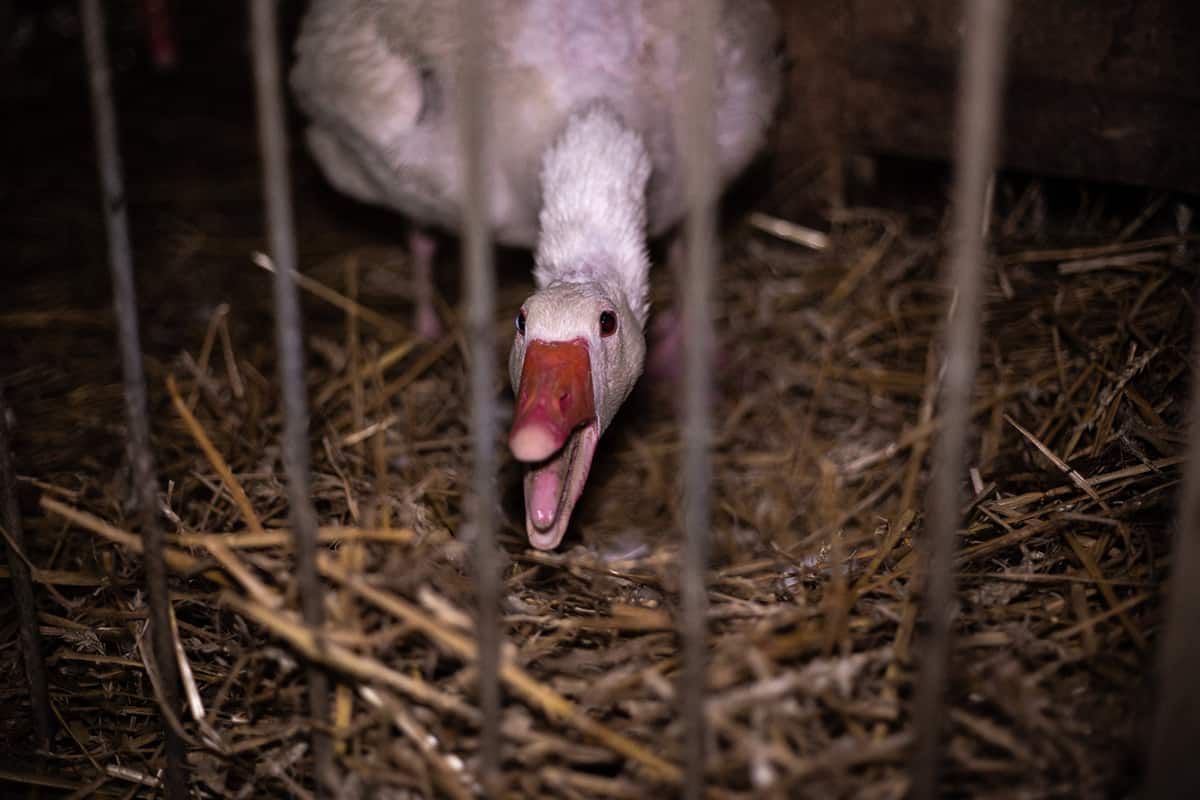 Foie Gras is so cruel some countries have banned it

It’s no wonder over a dozen countries have banned foie gras. But it’s an uphill battle as many restaurants don’t want to lose money they make from animal cruelty and even protested California’s state ban on foie gras when it came into effect. The Animal Legal Defense Fund and other organizations such as People for The Ethical Treatment of Animals work hard to take on tough animal cruelty cases, including the foie gras industry in California courts. Back in 2012 The Animal Legal Defence Fund filed a landmark lawsuit against Hudson Valley Foie Gras for their continued torturing of birds and using false advertising to sell products. Many restaurants in California continued to sell foie gras even though they were not allowed by California law and it became a long legal battle.

“In September 2017, a three-judge panel of the U.S. Court of Appeals for the Ninth Circuit upheld the ban. The foie gras industry then petitioned for the decision to be reheard by the full Ninth Circuit, and the request was denied. The industry then appealed the decision to the Supreme Court, which left the ban in a legal limbo—it wasn’t in effect again until the court reached a decision.” - PETA

But now California’s foie gras ban is being fully enforced and restaurants are not permitted to sell it under any circumstances. In 2019 New York City also banned the sale of foie gras and it goes into effect in 2022. In addition to these two US states, India, Australia, Israel, Brazil, Argentina, Denmark, Finland, Poland, Norway and several other European nations have banned the production of foie gras. That is not the case for Canada and several Quebec Farms still produce foie gras, including for export. Some farms in Quebec go so far as to call their production of foie gras “a geese paradise”. But PETA has released videos of foie gras farms in Quebec with birds in cramped and restricted conditions and it’s certainly no paradise.

Public opinion on foie gras is slowly turning against the industry thanks to so many caring people and organizations spreading awareness.  But we can’t stop until there is a ban on foie gras in every country. Foie gras producers will argue there is a way to perform gavage without cruelty and say ducks have the ability to expand their oesophagus. They will come up with misleading terms because they don’t want to lose money. There is no such thing as “humane” or “ethical” foie gras and force feeding any animal to the point of disease and death is animal cruelty.

A 2013 report from the Canadian Veterinary Medical Association backs this up.

“…the available evidence shows that the current feeding and management practices represent risks to animal health and welfare. The practice of force-feeding, the resultant adverse effects on liver function and bird health along with restrictive housing are unacceptable to the veterinary profession and other animal welfare advocates.” - Canadian Veterinary Medical Association

If people tell you they don’t want to stop eating foie gras let them know the torture that goes into each bit. You can also get creative and introduce them to plant-based alternatives. Put on your favorite apron and some lively tunes and attempt to make your own vegan faux gras from this recipe on BOSH! Invite your friends over for a taste and post a photo on social media with your masterpiece to let the world know that animals do not need to suffer for a meal.

Four things you can do to help: