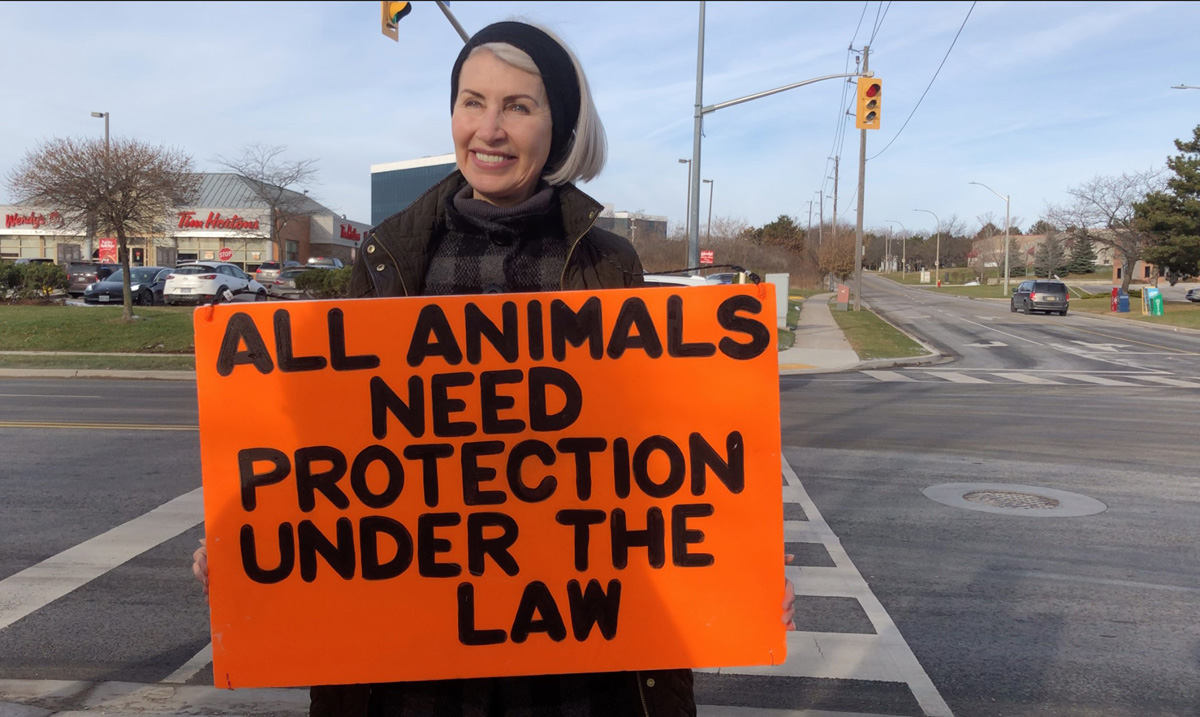 When we consider our options, what choice do we have but to work together globally for change?

You may read this already in agreement, or perhaps with an exacerbated sigh of ‘well yeah, but-’, and that’s understandable. My reaction has been both.

We are living through a time that has thrown and is throwing a multitude of challenges and travesties at us and into the world. There has been a terrible loss to the animal rights community. The loss of a brave activist, Regan Russell, who was struck and killed by a pig transportation truck in front of Fearmans slaughterhouse, Toronto. There have been the oppressive and deliberate attempts to hide the reality of animal agriculture. These efforts are as relentless as ever - efforts such as the Ontario ag-gag Bill 156 which passed just two days prior to the day that Regan Russell was killed. There also has, of course, been the historical coronavirus pandemic that sent the world into lockdown, forcing the animal rights community to adapt our actions.

But through these times, we have seen mobilization, resolve and perseverance that allows for much hope.

In the weeks and months after Regan’s death, activists globally held vigils and took direct action in memory of Regan and in protest to the horrendous ag-gag bill 156. As well as there being an increase of animal save vigils and vigils for Regan, there has also been action from coalitions of animal rights groups. Many actions stand out like the marches in Toronto, Burlington and Hamilton and the demonstration at the Halton Police station demanding justice for Regan. An international action that stands out is the Canadian embassy demo in London, UK, where a range of groups came together and supported that day of action - a day that involved two activists locking onto the road outside of the embassy.

Whilst the pandemic has been a huge disruption to our ways of working, this too has exposed how versatile and supportive our community can be. It has also highlighted to us that the mainstream media are simply not adequately covering some of the most important issues of our time. There has been a terrible lack of coverage for Regan’s death as well as Bill 156, despite both being colossal injustices. It has only been through the collective action of activists globally that these issues have been addressed.

From this reality, the message is clear: We must collectively force injustices into the light, where they may burn up in the minds of the public until the public feel morally compelled to take action with us in defiance of society’s tyrannies.

But who should we be working with? Well, with this question there is an important issue to raise. Pattrice Jones - educator, author, activist and co-founder of VINE sanctuary - suggests that the mainstream is not the majority. This quietly revolutionary idea could hold a lot of weight. The idea that there is a vast array of alternative groups that ultimately outnumber the mainstream, is a very hopeful idea indeed. Why? Because those groups are, for the most part, already active in their own areas of activism and actively care about justice.

As addressed by Pattrice and many others in the animal rights movement, we can be stronger when we work with many different groups, without always a mainstream focus. This point is one that cannot be stressed enough - especially when it’s result would also mean a potential strengthening of other justice movements too as we all begin to collaborate more.

What does it mean to work together? It doesn’t mean simply to agree and it doesn’t mean to discard the notion of conflict. In fact, it means to embrace the reality that conflict is a part of life and a part of collective work. It means that we don’t put aside our differences, but rather accept them and use them as well as our similarities to embrace collective action towards a shared vision.

What is that shared vision? Well, one where individuals like Regan are not killed because they dare to be respectful of the lives of nonhumans animals and dare to take action to stop the rights violations against those victims of oppression. A world where we acknowledge the fundamental rights and needs of all individuals, and a world that will see all life far better off as a result of this fundamental respect. You can read here for more information about this.

A final note on hope…
For those of you who remember being taught about tales of Greek mythology, who recalls the tale of the gods tricking Pandora to open a box of horrors? When opened, it unleashed terror and hell upon the world.

We live in a world now that, make no mistake, has elements of the hell the ancient bards spoke of. Nonhuman animals live out that hell each and every day. But what people forget from that story of old is that, in some versions, at the bottom of that box something remained trapped...hope.

In our deliberate action to collaborate with the various and powerful groups that make up the animal rights movement and beyond, we release that hope into the world - we begin to see the larger capacity for good that we are capable of.

What will you do with that hope? Maybe that story will stay with you as you help define the next chapter in the story of the animal rights movement.