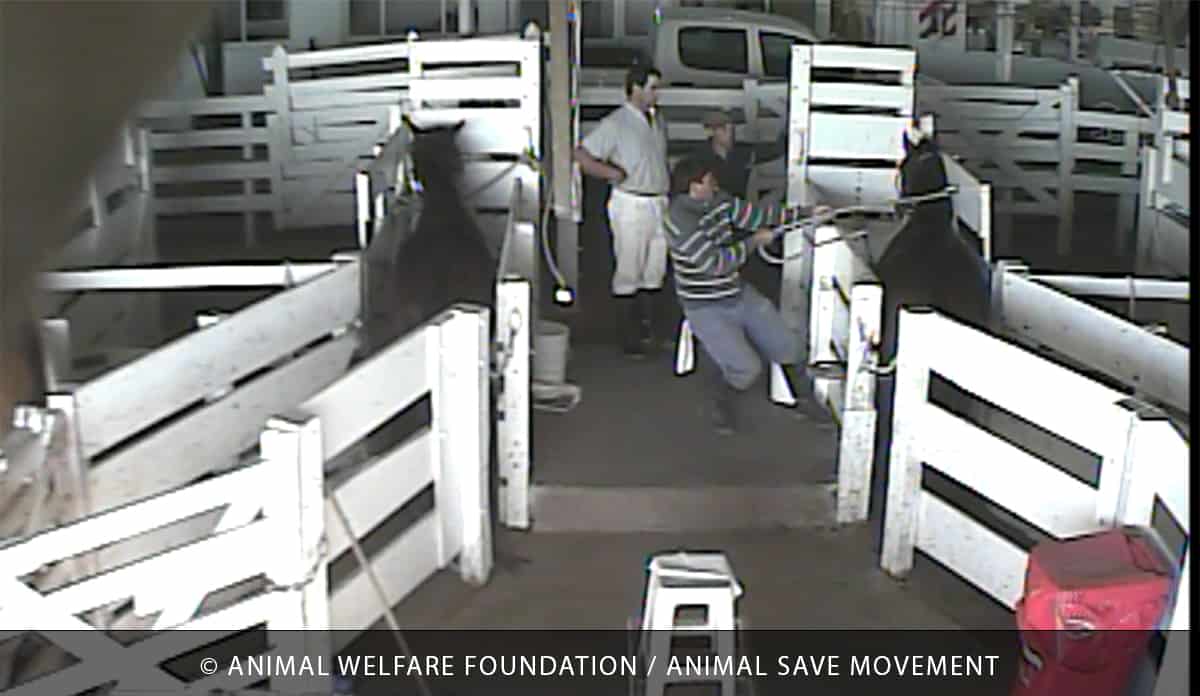 Crammed into restraint pens and ­repeatedly forced into pregnancy, tens of thousands of horses have their blood extracted on obscene vampire farms in Argentina and Uruguay in what can only be described as an endless chain of violence within the animal agriculture industry.

They have giant needles stabbed into their jugular veins to suck out the fertility hormone Pregnant Mare’s Serum Gonadotropin (PMSG) - also known as Equine Chorionic Gonadotropin - it is later injected into other farmed animals to speed up their fertility cycle so they can be forced to have more babies much quicker than naturally.

Once or twice a week, up to ten litres of blood is taken over a period of 11-12 weeks. The mothers then endure forced abortions as the hormone can only be obtained during early pregnancy. The barbaric cycle then restarts and the horses are impregnated again. Once they become infertile or too anaemic they are violently slaughtered and sold so their bodies can be eaten.

Why is this happening? The PMSG is used to boost production and therefore profits on pig factory farms across Europe, and in the UK it has also been used on sheep, dogs and cows.

It is believed that 80% of pig farms in Germany use PMSG, but its use in other nations remains unclear since the EU and UK does not require farmers to record the use of PMSG.

Once injected into pigs, this cocktail of hormones means that within just two days of a mother giving birth, she can become pregnant again, giving her body little time to recover.

Since 2015, Tierschutzbund Zürich and Animal Welfare Foundation have regularly carried out investigations in Argentina and Uruguay to uncover and document the violence and suffering of horses used for PMSG production.

Their footage exposed emaciated bodies weakened by blood loss. Staff were filmed beating their victims with boards and electric rods to force them into stalls. One hopeless horse is seen woefully resting her head on railings trembling. A worker kicks her three times in the face before she collapses to the floor.

The blood trade is a lucrative industry with the concentrated hormone higher in value than gold. Besides the Argentinian company Syntex SA, which is one of the largest producers of PMSG worldwide and has a branch in Uruguay, there are three more big producers in Uruguay: the blood farms "Las Marquesas", "Biomega SA" and "La Paloma”.

Local Animal Save Movement activists say there are more farms hiding away from scrutiny, “The blood farms operate in remote woodland to hide the horror. Activists attempting to expose the secretive clandestine industry have already been threatened at gunpoint.”

The shady trade operates in a legal grey area. Officially the Ministry of Livestock, Agriculture and Fisheries in Uruguay and the SENASA (Servicio Nacional de Sanidad y Calidad Agroalimentaria) in Argentina are responsible for the supervision of PMSG extraction. However, in Argentina there is no legal protection for animals exploited in this way and in Uruguay the animal welfare manual for PMSG is based on non-binding recommendations, which in effect are voluntary.

The violence doesn’t end with the tortured horses, or the additional suffering of cows, pigs, sheep and dogs, and it doesn’t even end with the activists threatened with violence; PMSG is also linked to crude research taking place inside secretive vivisection laboratories worldwide. In one experiment led by both the Tehran and Yale School of Medicine, 20 rats were injected with PMSG and then mutilated and killed so their ovaries could be removed for examination. The systematic cycle of violence and interconnectivity is endless, and we must act now to stop it.