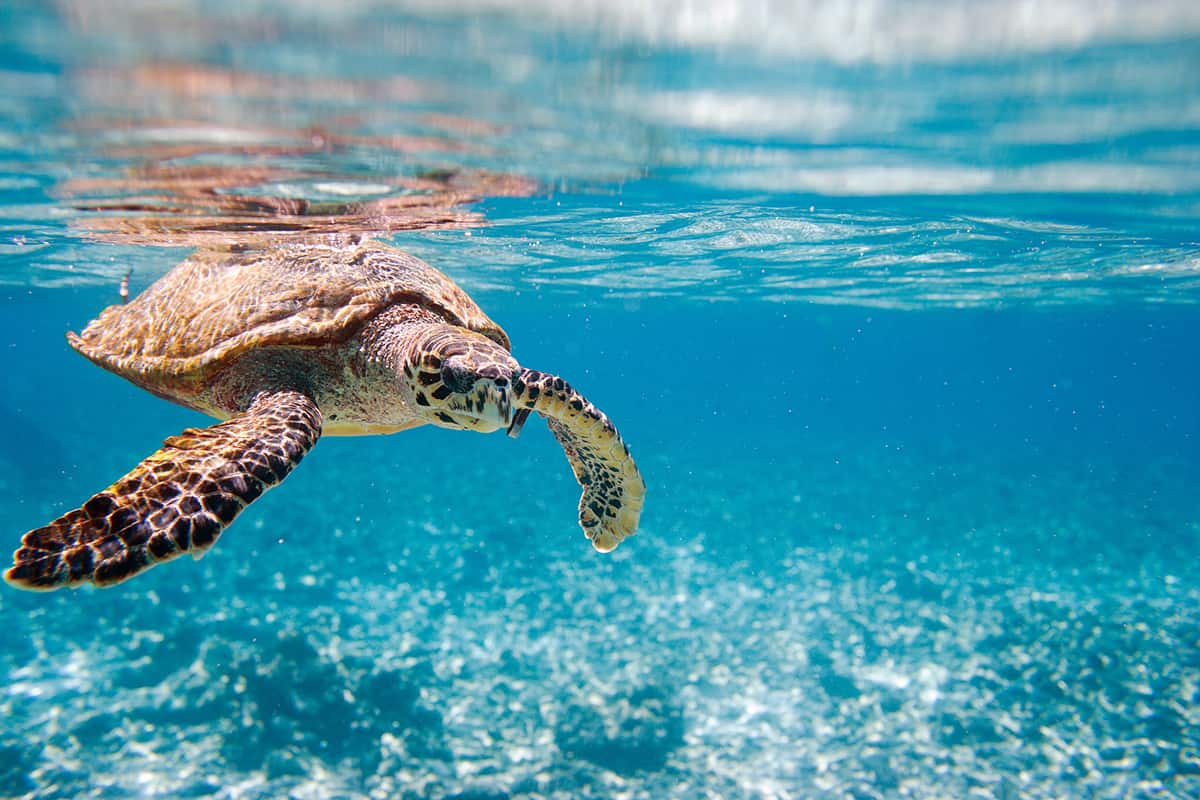 Splashing onto our screens, Seaspiracy has quickly gone viral, entering the top ten on Netflix in several countries worldwide. The documentary offers a first of its kind look at the cold, cruel and environmentally devastating reality of the fishing industry, with surprising — and often unthinkable — revelations. I was hooked.

The wave-making documentary takes you on a deep dive into the dark undercurrents of the global seafood industry, uncovering exploitation, mass destruction, ecological collapse and the tangled worlds of modern day slavery alongside extensive human and animal exploitation.

Here are my five key takeaways from the documentary:

Oceans are a true unsung hero of our time. They play an essential role in absorbing carbon dioxide (CO2) from the atmosphere and, critically, releasing oxygen (O2) for us to breathe. This cycle is constantly ongoing, and our existence relies entirely upon it; oceans are one of our major ecological lifelines. No biggie, right?

However, this lifeline can only function correctly if the oceans are healthy. In particular, our existence hangs quite precariously on whales, sharks and other large marine mammals, which form a critical piece of this ecological puzzle. Surprisingly, one of the key ingredients is poop - which is excreted in large amounts by whales and other species. In turn, the poop feeds the phytoplankton in the water. It’s the phytoplankton which — like any green plant — works hard to absorb CO2 and release oxygen1. Think of a tiny army of green plants working together to suck out the bad stuff and pump out the goodies, all fuelled by gorging on whale poop. And while they may not be anywhere near as glamorous, phytoplankton have been found to absorb around 4x more carbon than the Amazon rainforest, providing up to 85% of the Earth’s total oxygen2. 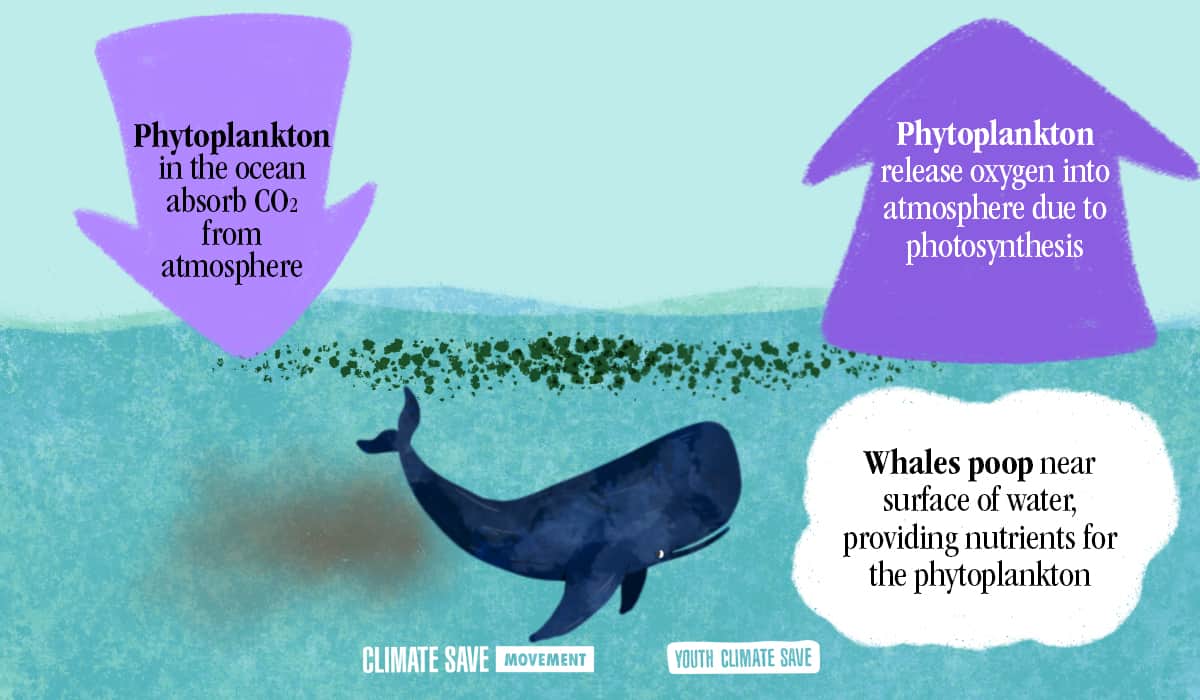 Sadly, as highlighted by Seaspiracy, 90% of the world’s large fish have been wiped out by fishing3, having a direct impact on phytoplankton levels, which are becoming increasingly starved of their poop-y nutrients. 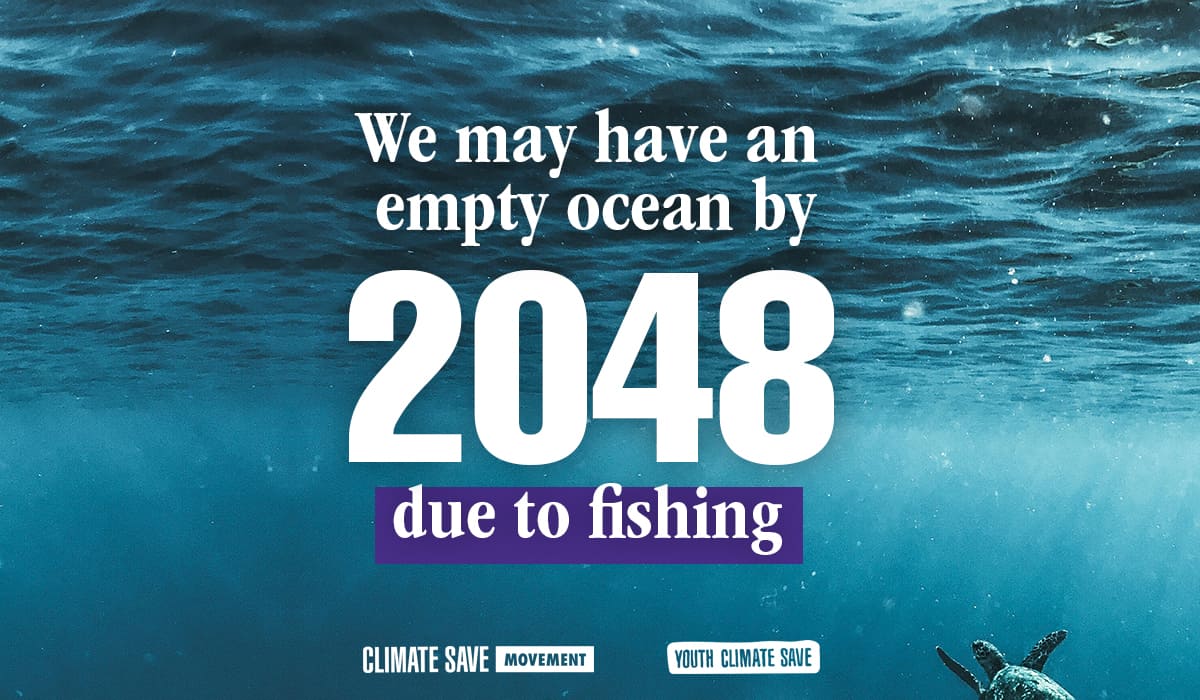 A 2006 study also estimated that we may have an empty ocean by 2048 due to industrial fishing — an utterly terrifying thought4. Our ocean is drowning in pressure from so many sources; plastic waste, pollution, trawling, damage to coral reefs, change of water temperatures, waste pollution from land-based animal agriculture, loss of critical fish and marine mammal species, and many other damaging practises. As such, we are drastically lessening the ability of the oceans to carry out biogeochemical cycles which are not only critical to our survival, but essential for the incredible array of sea life to survive.

2. Reforesting efforts must include sea forests.

The ocean is Earth's largest carbon sink, holding 93% of all stored carbon5. It's also amazingly efficient at mopping up our manmade mistakes, such as the spiralling levels of carbon dioxide (CO2) which we're pumping into the atmosphere. Carbon sinks are ecological mechanisms where more CO2 is absorbed (sequestered) than is released back into the atmosphere, and the oceans are the unsung heroes of our modern day carbon crisis.

Although many people think of trees when talking about absorbing carbon dioxide, the oceans are actually one of the most efficient ecosystems at actively sequestering carbon and locking it away. For example, it has been found that mangroves, seagrass beds and salt marshes store up to 10x more carbon compared to forests6. Additionally, other marine plants have the potential to absorb a staggering 20 times more CO2 than rainforests.7 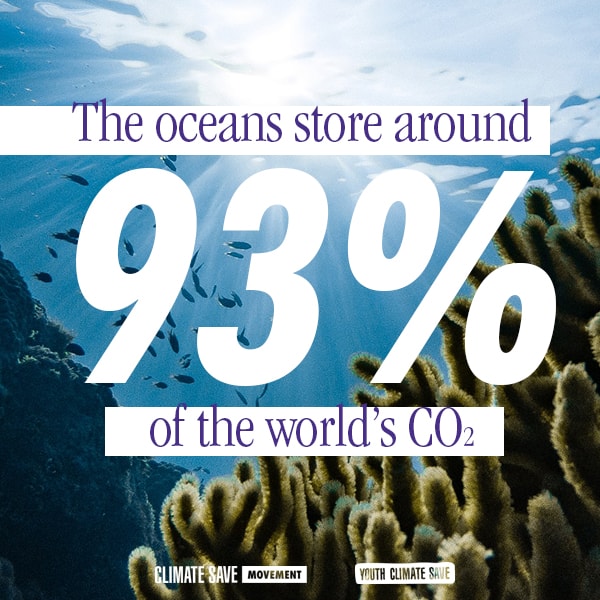 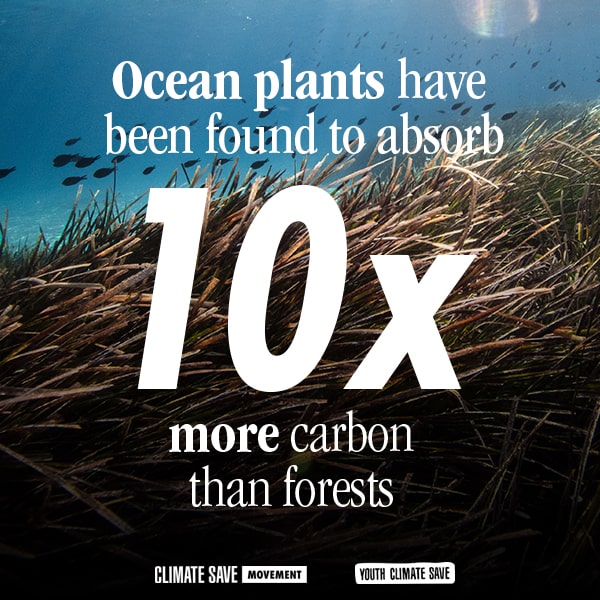 Unfortunately, trawling is directly responsible for 3.9 billion acres of seafloor being deforested every year, causing huge levels of destruction. A recent study found that trawling for fish is heavily disturbing the bottom sediment (which stores CO2), causing a release of CO2 equated to all air travel8. 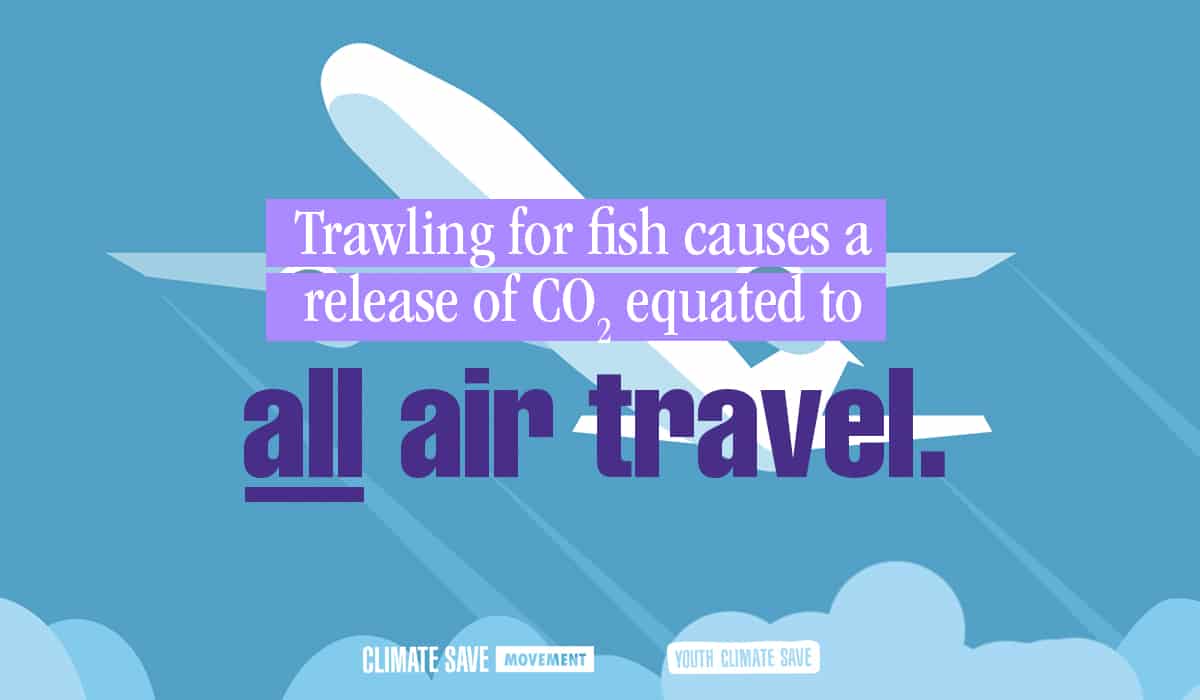 3. Forget plastic straws - the biggest risk to the ocean is fishing.

We’ve all seen the ongoing furore about plastic straws. We get it, they suck. But the biggest threat to the ocean, and biggest contributor to plastic waste (including microplastics) is — you guessed it — the fishing industry. 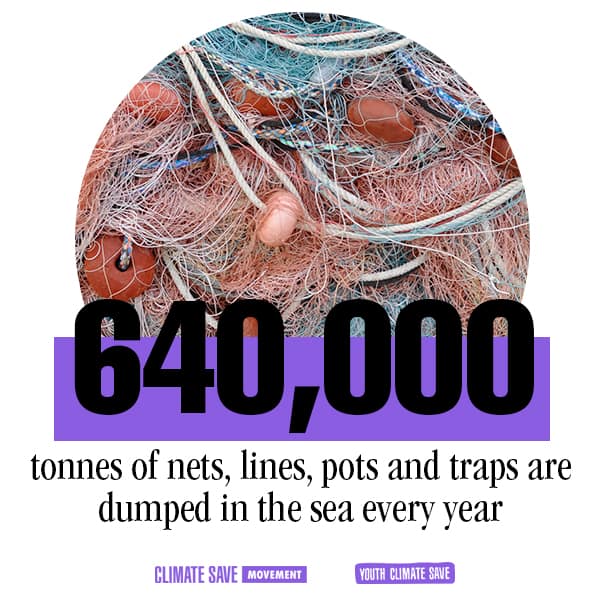 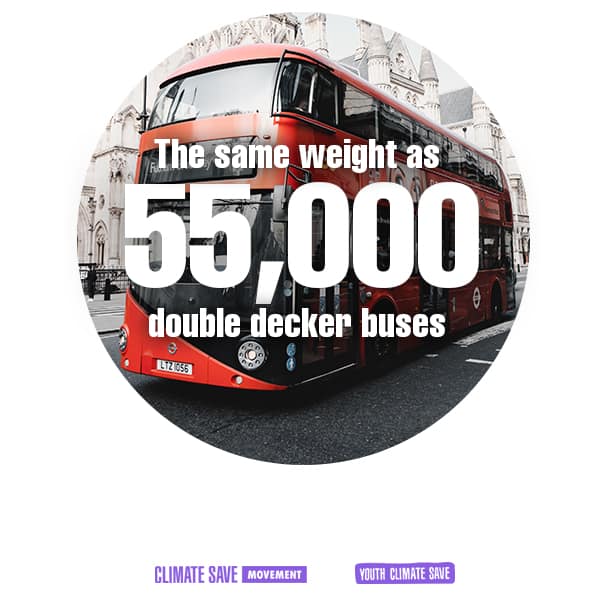 More than 640,000 tonnes of nets, lines, pots and traps used in commercial fishing are dumped and discarded in the sea every year — the same weight as 55,000 double-decker buses9. As highlighted by Seaspiracy, a shocking 46% of the great pacific garbage patch is now comprised of fishing nets10. In addition, ghost nets (plastic nets dumped in the sea), which drift and kill sea life, are said to contribute up to 10% of the plastic waste in the ocean.

“Even if not a single gram of plastic entered the oceans from today onwards, we would still be ripping those ecosystems apart because the biggest problem by far is industrial fishing” — George Monbiot, author and environmentalist

4. Fish feel pain and have families, friends and personalities. 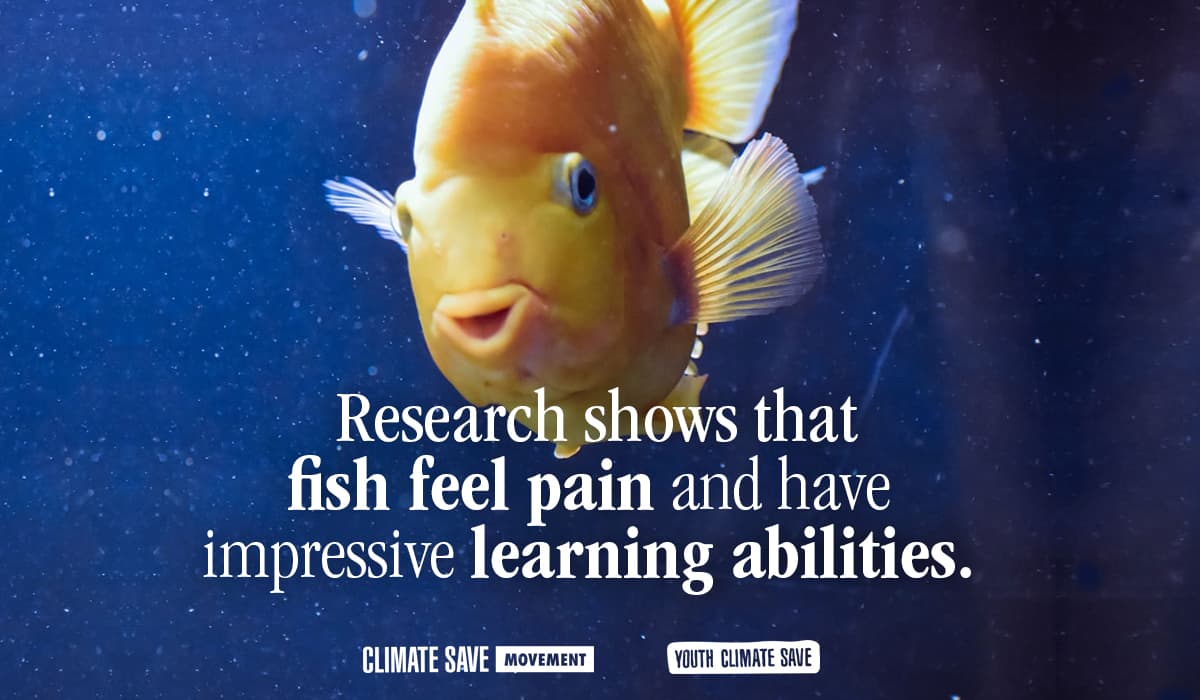 Long denied by many, fish do feel pain, have complex social structures and even have preferred friends11. While they still remain under-researched, current studies indicate that they have a capacity to feel pain ‘like humans’. Scientist Jonathan Balcome, featured in the documentary, points out that fish have nervous systems, consciousness, and are very able to feel an array of emotions, as well as (somewhat unfortunately) the ability to suffer12. Fish also have learning capacities and can demonstrate a whole host of impressive learning behaviours13.

5. There is no such thing as sustainable or ethical fishing.

All of us know the cute little red boat with a white-bearded captain lovingly and carefully catching a few fish for his enthusiastic family. But, as Seaspiracy points out, this has been the longstanding propaganda of the fishing industry, embedded in our minds through constant advertising and false labelling of products. In reality, seafood is caught and killed by large scale highly industrialised trawlers that dredge the ocean of all life, destroying fragile and critical ecosystems along the way, with devastating consequences. 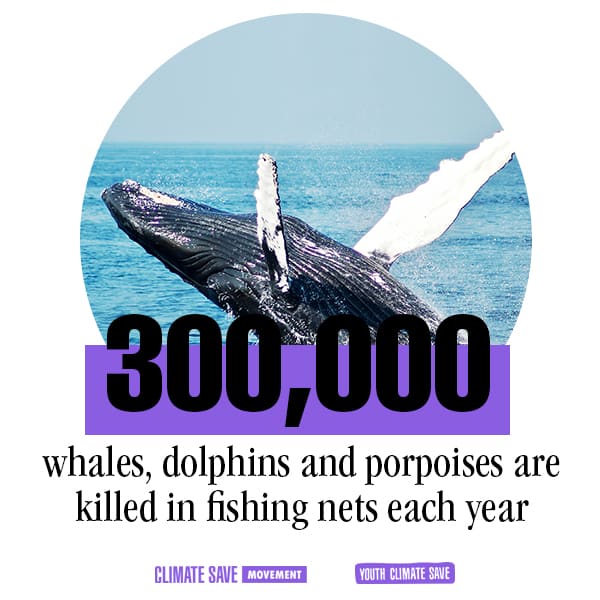 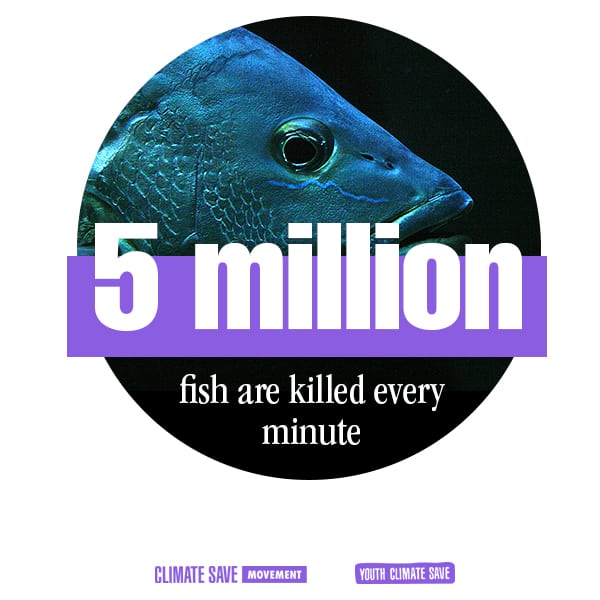 Around 300,000 dolphins, whales and porpoises are killed in fishing nets each year — averaging at around 800 per day14. And while it is utterly tragic that these incredible creatures are killed ‘by accident’ through industrial fishing, we mustn’t ignore the fact that fish themselves are being killed at shocking rates - approximately 5 million are killed every minute. Ultimately, the biggest threat to fish, sea life, and the oceans, is fishing.

Sustainable fishing is often touted as an ideal solution, but it doesn’t take much to scratch the surface and find that this term is poorly defined, impossible to monitor at sea, and riddled with industry-vested pay-offs that make even well known ‘sustainable’ fishing labels highly dubious. The cold, harsh reality is that there is simply no such thing.

Knowing the importance of our oceans for us, other species and the climate, we must act now to end the ongoing ecological destruction and killing of sentient species. With so many plant-based options available to us, there really has never been a better (or more urgent) time to leave sea animals off your plate. The best way to save the oceans is to stop eating it, and start saving it!

Get Social with Climate Save Movement