Regan Russell, 65, was violently struck and killed by a pig transport truck in front of Sofina’s Fearmans slaughterhouse on Friday, June 19, 2020. She was at a Toronto Pig Save vigil with six other activists giving pigs water on one of the hottest days of the year. She regularly attended pig vigils and on this particular day Regan was there to oppose Ontario’s “ag-gag” Bill 156, which had passed two days prior. 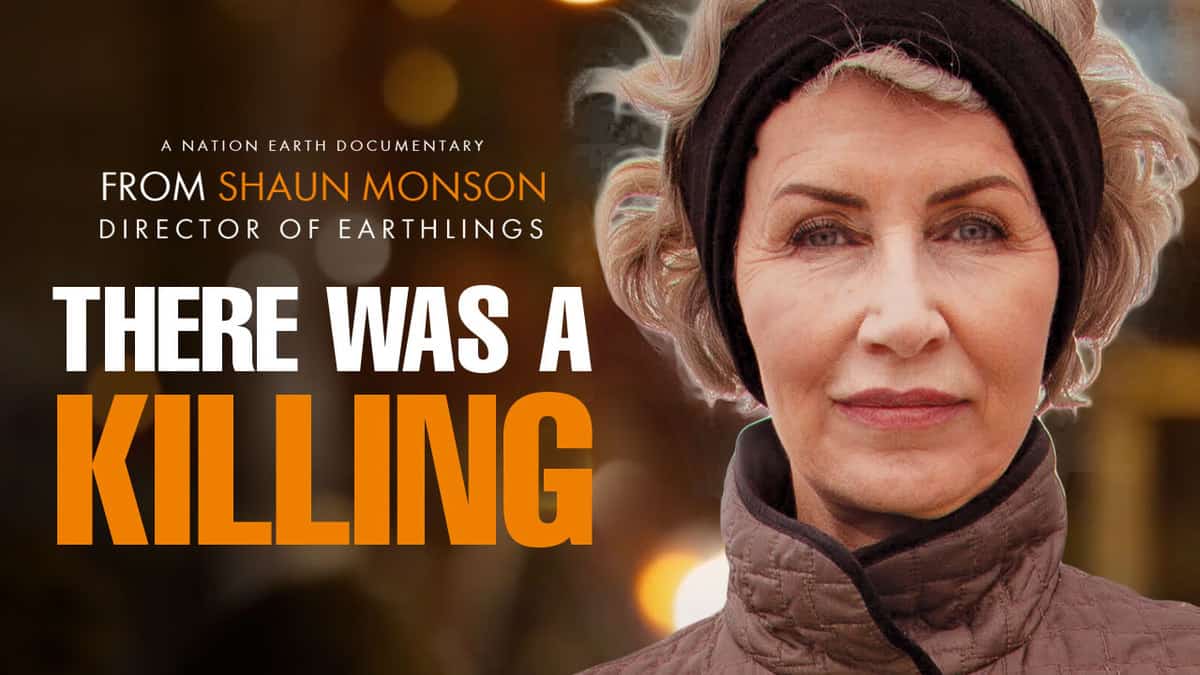 Watch There Was a Killing by Earthlings Director Shaun Monson. Free online screening.

"Regan Russell spent the final moments of her life providing comfort to pigs who had never experienced the touch of a kind hand. While her tragic death has brought upon deep sorrow in the Animal Save [Movement] community, we will honor her memory by vigorously confronting the cruelties she fought so hard to prevent by marching with Black Lives, protecting Indigenous rights, fighting for LGBTQ equality, and living a compassionate vegan life. The Ontario government can attempt to silence us with the passage of its Ag-Gag bill - Bill 156 - but we will never go away and we will never back down." 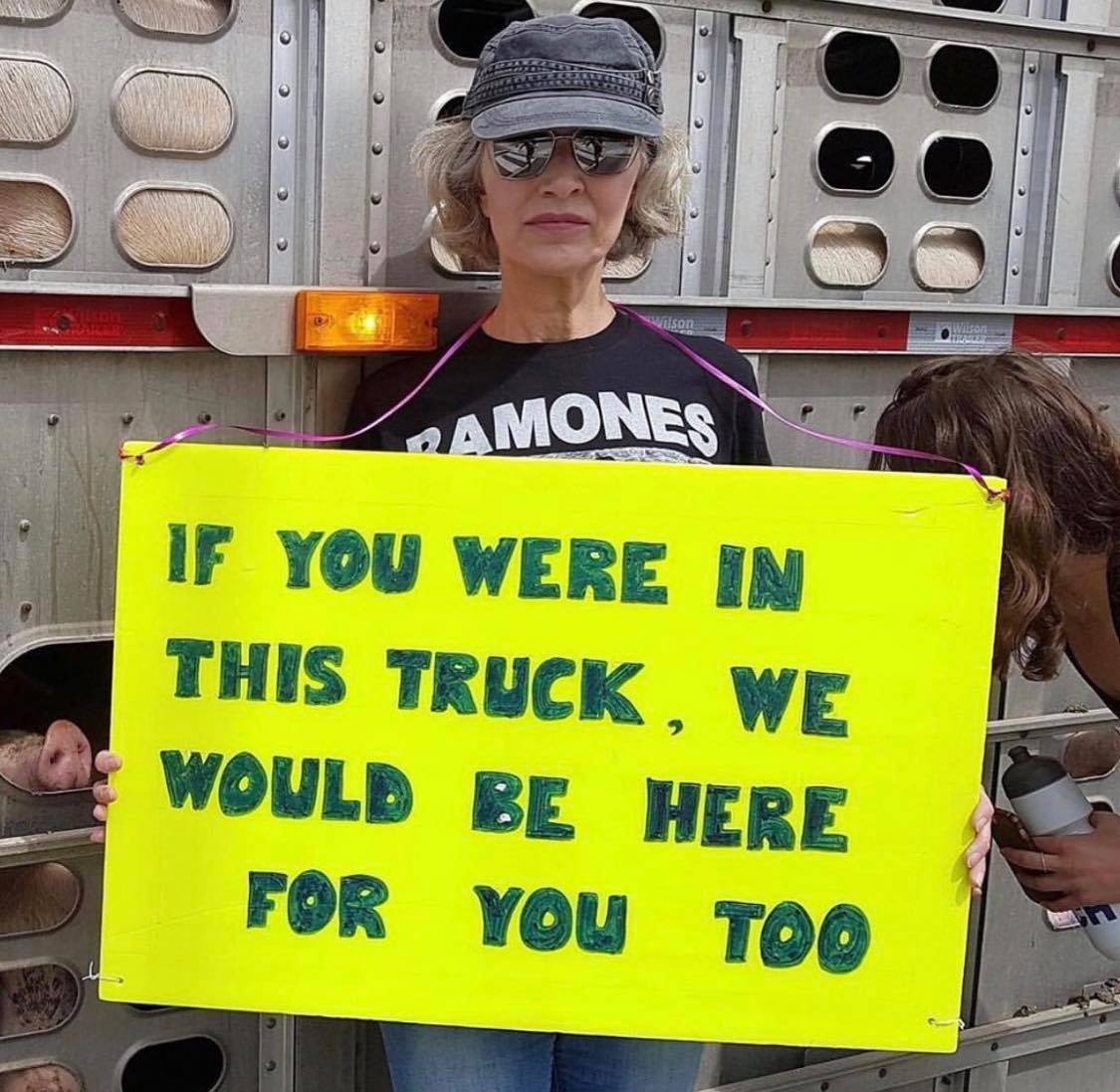 A long-time social justice activist, and animal advocate since 1979, Regan believed all life was worth fighting for.

She was arrested on 11 occasions for various acts of non-violent civil disobedience, stating, “People say we’re breaking the law… How do you think women got the right (to vote)? How do you think slavery was abolished? People stood up and broke the laws — because they’re stupid laws.” 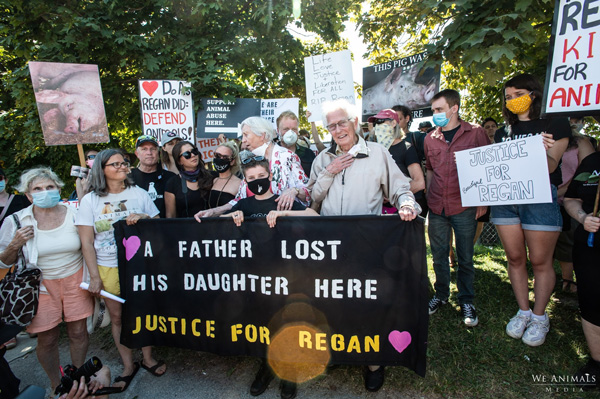 Regan’s killer, a 28 year old male from Brussels Trucking Company has been charged with careless driving causing death and will appear in court later this year.

In a statement, her stepson Josh Powell said, "Losing Regan has been a terrible experience, and the lax charge in response to her death has only made that pain deeper.”

Anita Krajnc, co-founder of Animal Save Movement, has made calls for the police to release video evidence of the incident, so it can be examined, "These charges are feeble and do not amount to justice for Regan.” 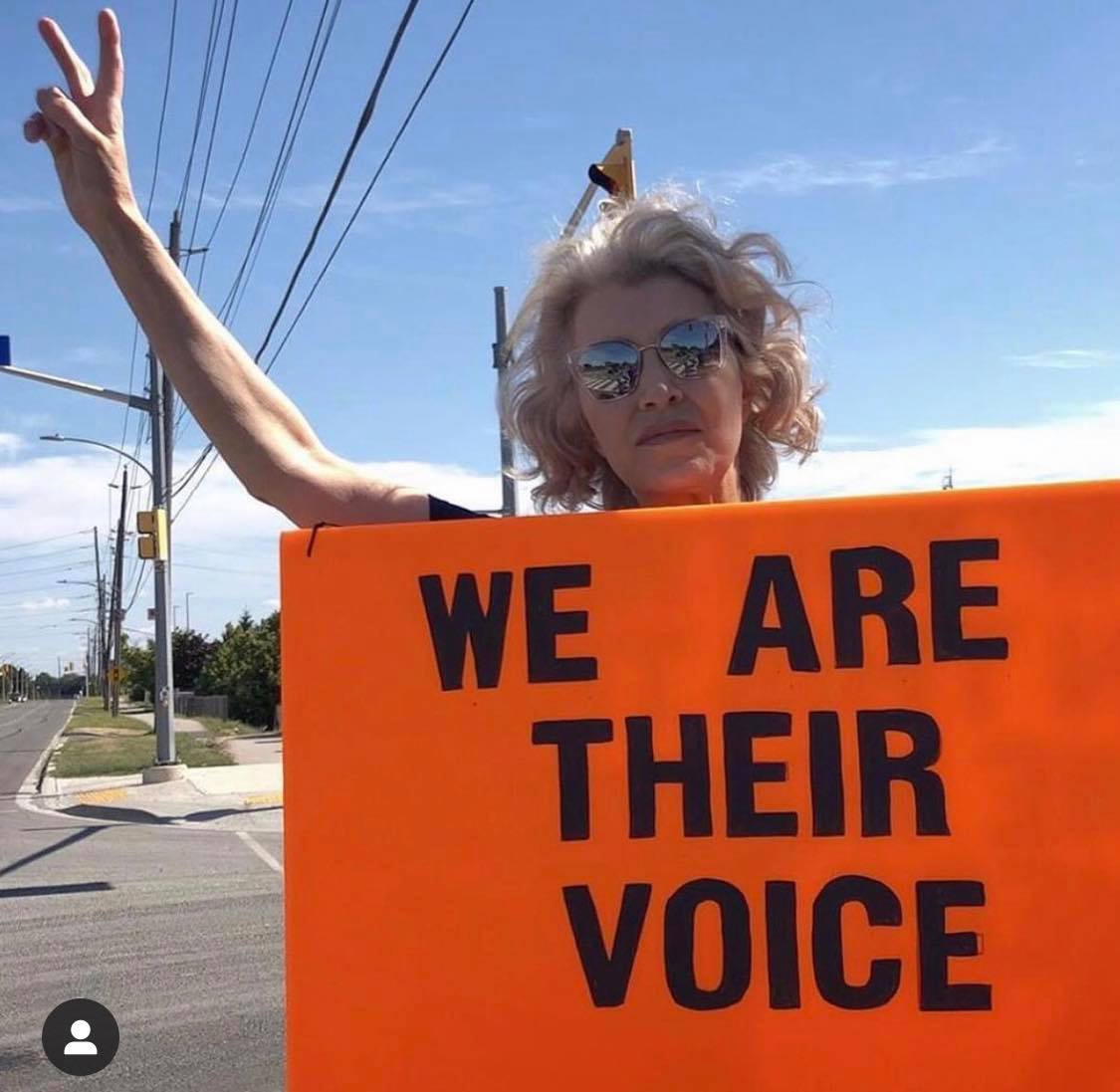 “Ag-gag” Bill 156 is a dangerous piece of legislation designed to criminalise whistle-blowers, journalists, and activists from performing their vital role in exposing the horrific treatment of farmed animals.

It specifically targets groups such as Animal Save Movement and those who peacefully bear witness to farmed animals outside slaughterhouses, provide water to dehydrated animals, and document their suffering.

Bill 156 is likely to increase the risk of dangerous driving by slaughterhouse truck drivers, since it offers farmer protection against civil liability from anyone hurt while contravening the act. This provision could enable and embolden transport truck drivers to drive aggressively, and endanger the lives of peaceful, law-abiding citizens.

Bearing witness at animal vigils is a basic right to freedom of expression.

“This is a fight for the sanctity of our rights as free citizens to demonstrate for what we believe in. We seek to repeal Bill 156 in its entirety, and let it be known we believe Regan’s blood is on the hands of those that supported this vile legislation.” – Mark Powell (Regan’s partner)

Regan’s legacy of love and compassion lives on through each and every one of us fighting for change.

Animal Save Movement demand Justice for Regan and are working towards the following goals:

There are many ways you can help fight animal injustice to ensure Regan’s legacy lives on:

WRITE TO YOUR MPP

Write to your MPP about Regan & ask them to repeal Bill 156.

Write to Your MPP

Sign up to our weekly newsletter for the latest news and action alerts.

Please sign and share the new petition from Animal Save Movement's criminal lawyer Shane Martínez, calling on the coroner's office to set up a public inquiry into the wrongful death of animal activist Regan Russell.

Contact the Halton police chief to ask him to release footage of Regan’s death and upgrade the charges against the driver. The current charge of careless driving causing death is weak and does not amount to a criminal offence.

SIGN OUR PETITION ASKING FEARMANS TO AGREE TO A SAFETY AGREEMENT

Animal Save Movement and Toronto Pig Save have repeatedly called on Fearmans Pig Slaughterhouse to agree to a safety policy. We need your help to amplify our calls, to prevent a future tragedy.

Nicholas Latifi, the son of Sofina's Founder and Executive Chairman, Michael Latifi,  is racing in the Formula One (F1).  Latifi’s car is funded by killing animals.

We call on the sponsors, supporters and owners of Formula One to reject Sofina blood money.

Share our videos with the hashtags #JusticeForReganRussell #RepealBill156 #GoVegan4Regan #SavePigs4Regan on social media. Use the videos we have provided below

Share some of the Regan Russell media coverage to help her story reach new audiences.

Challenge 22 offers participants a free, supportive online framework for trying veganism for 22 days. More than 400K people from all over the world have participated in the project since its launch in March 2014.

Join your local Save Chapter or start your own.

Copy and paste the video links below on your social media channels. 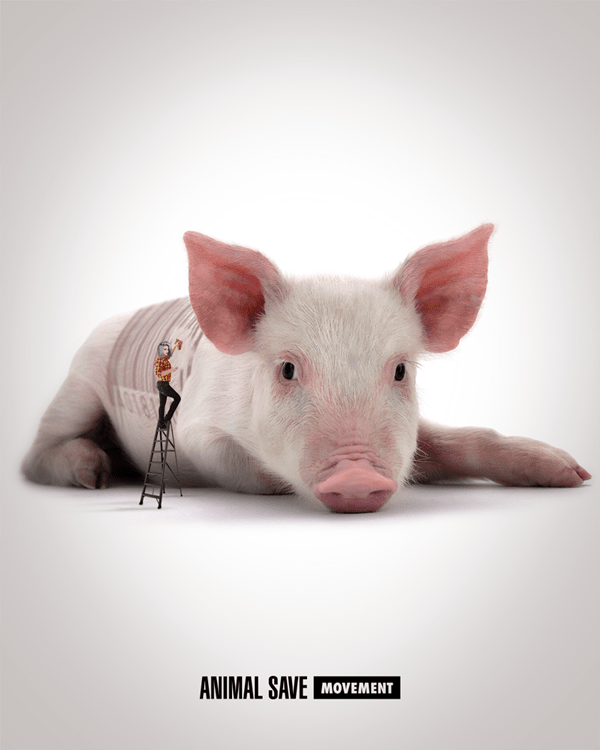 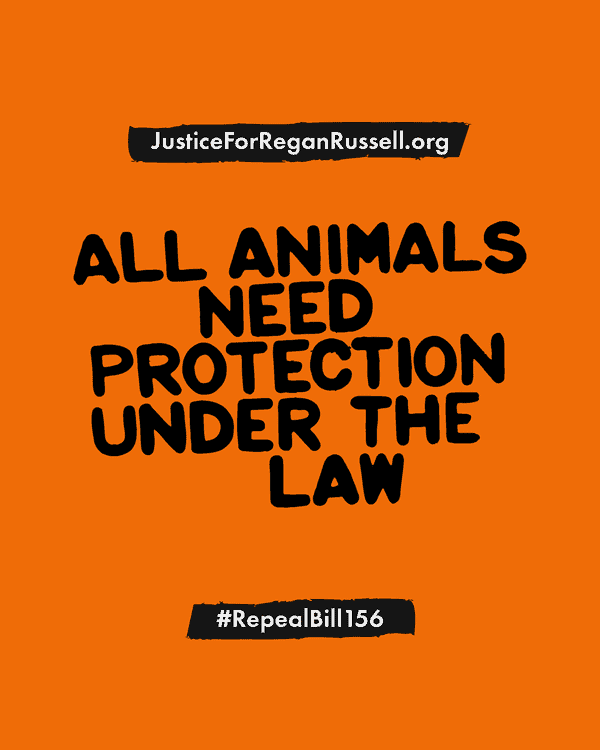 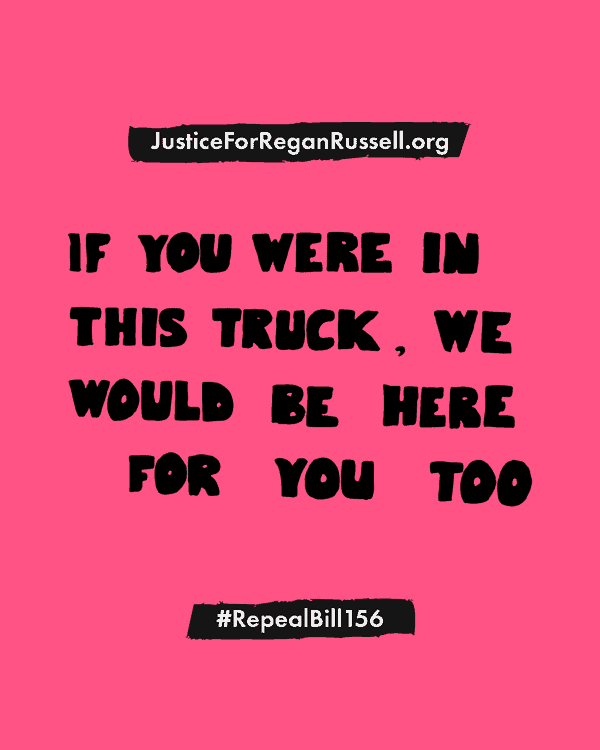 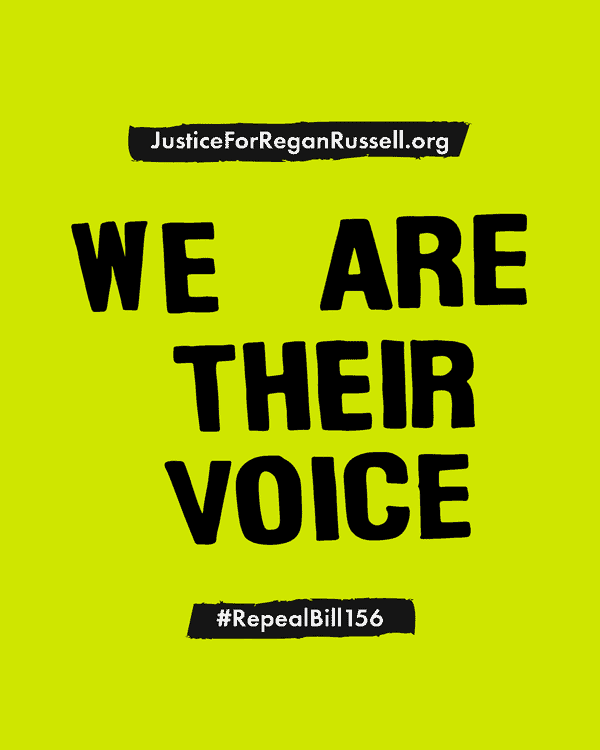 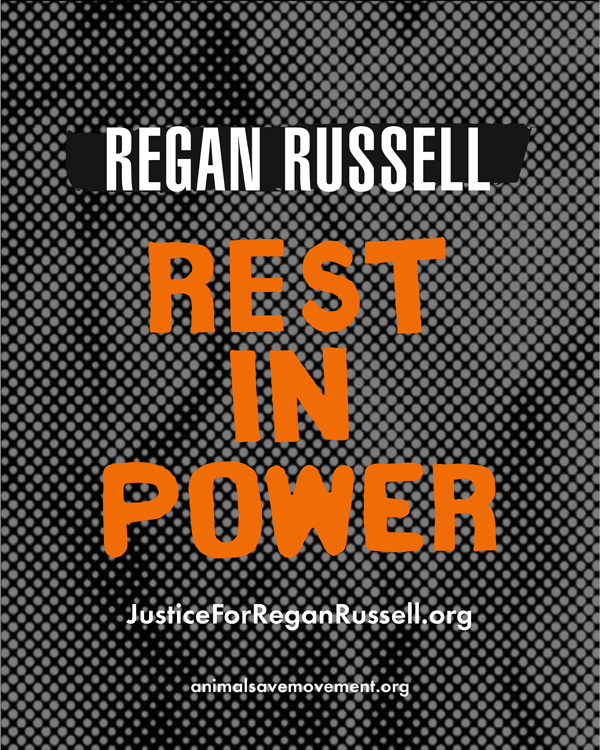 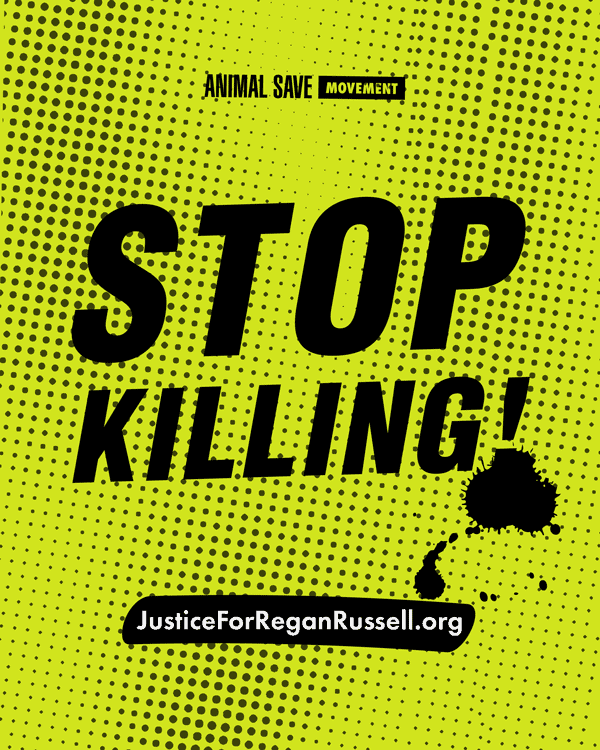 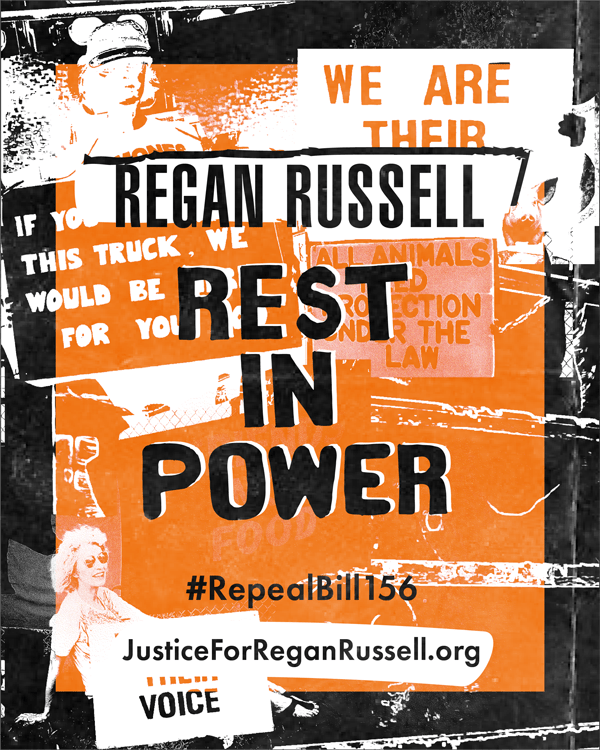 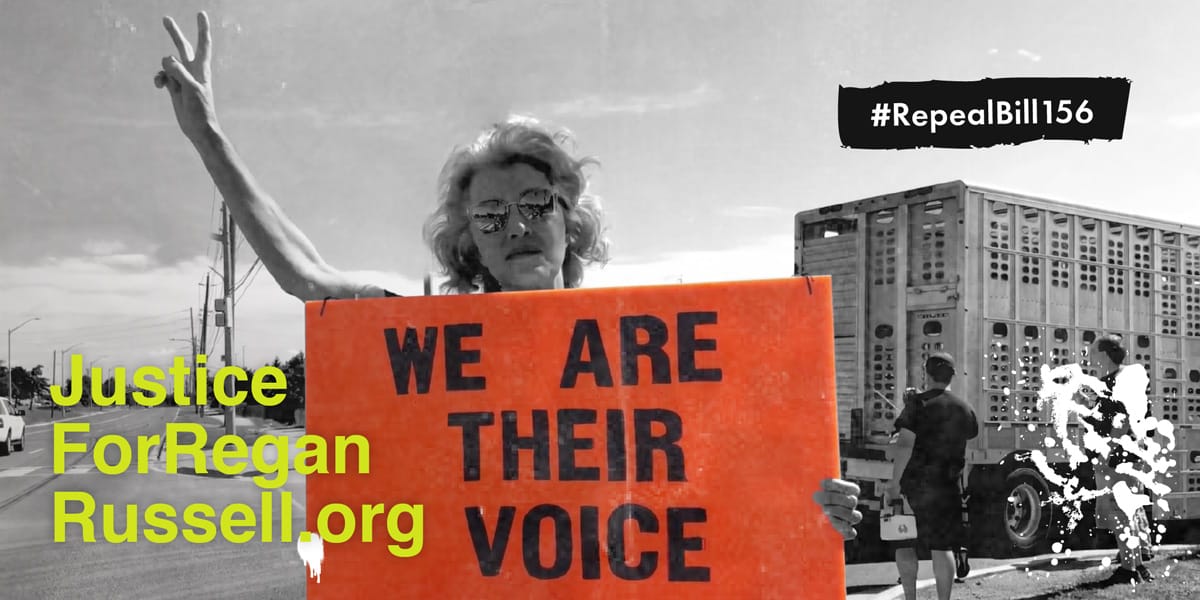 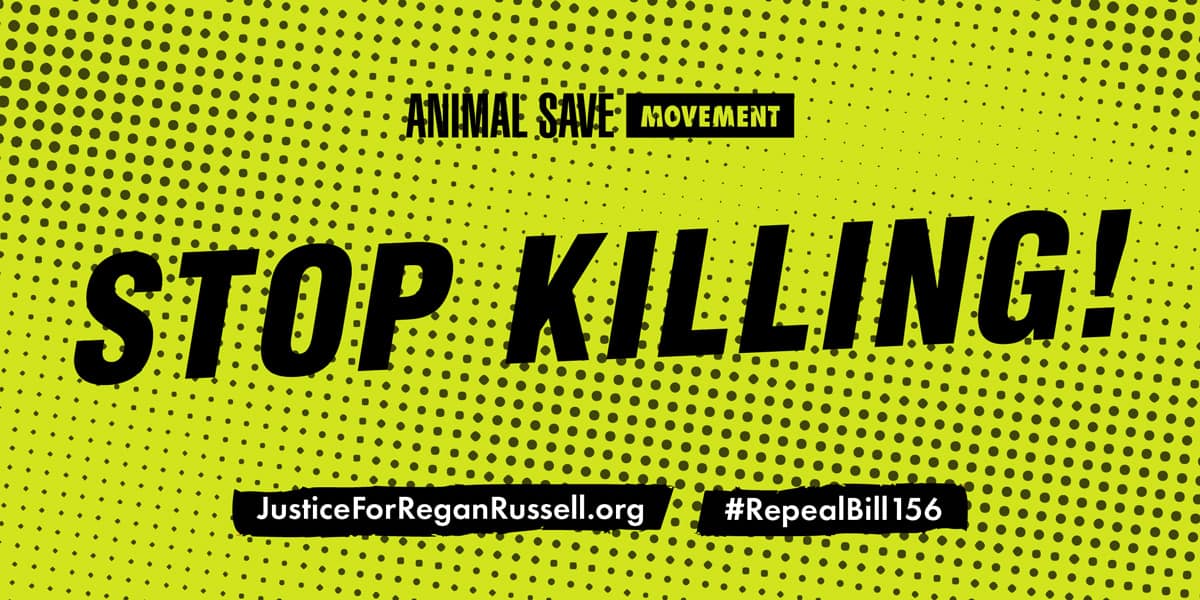 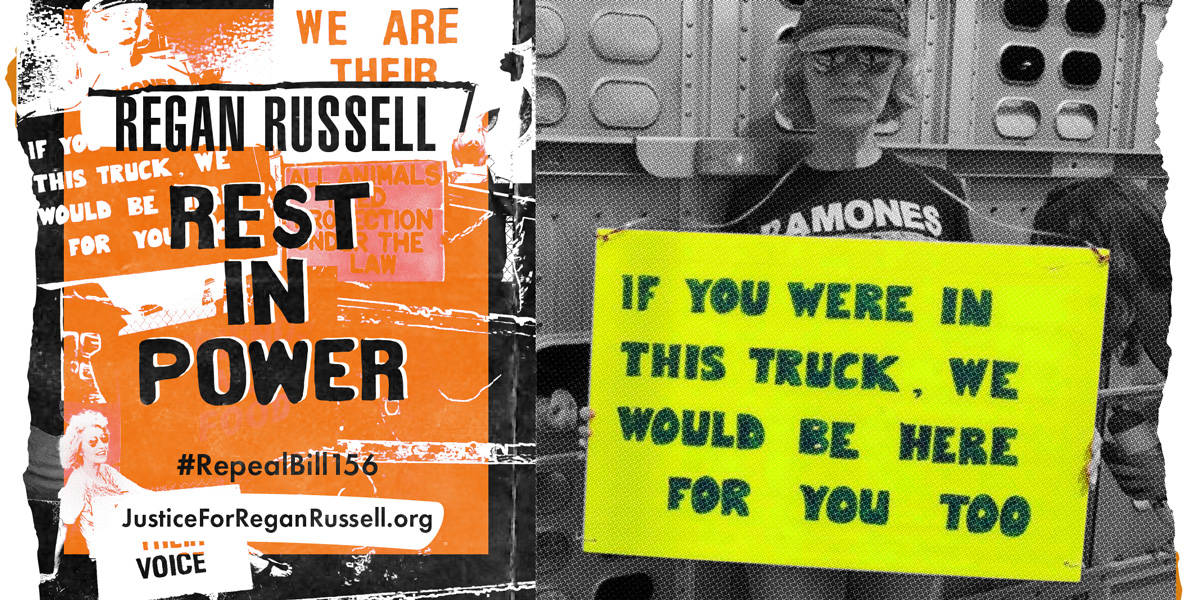 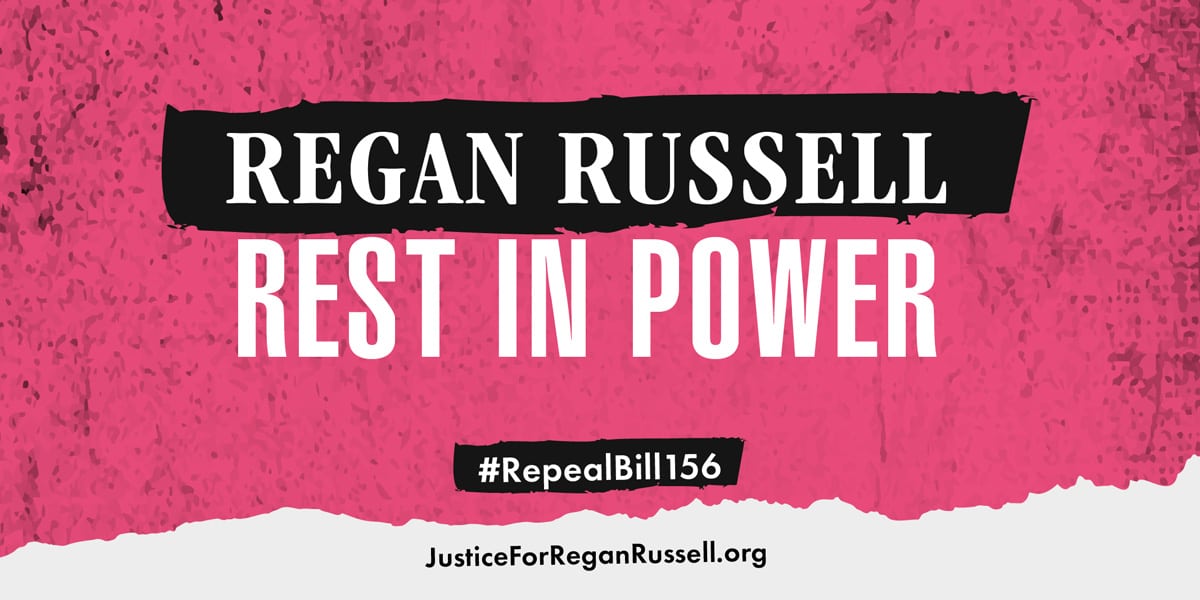 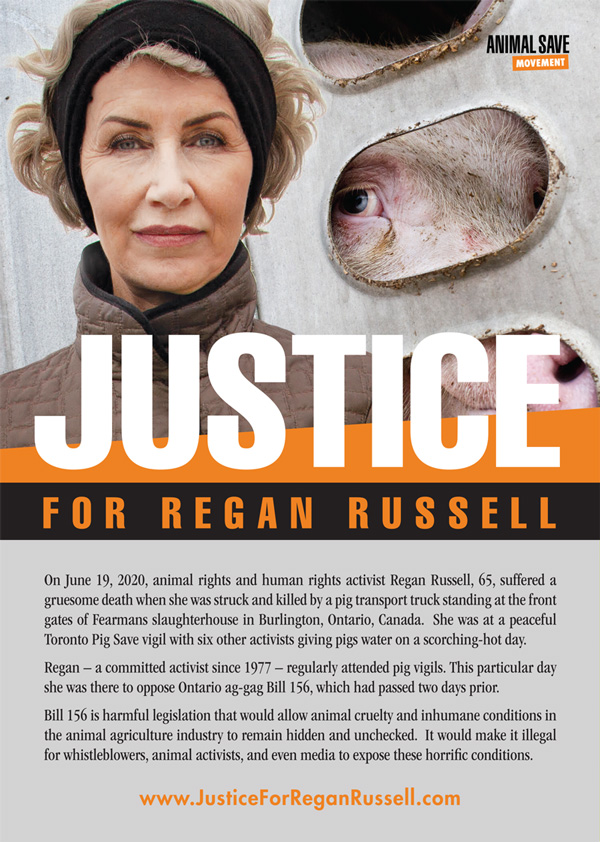 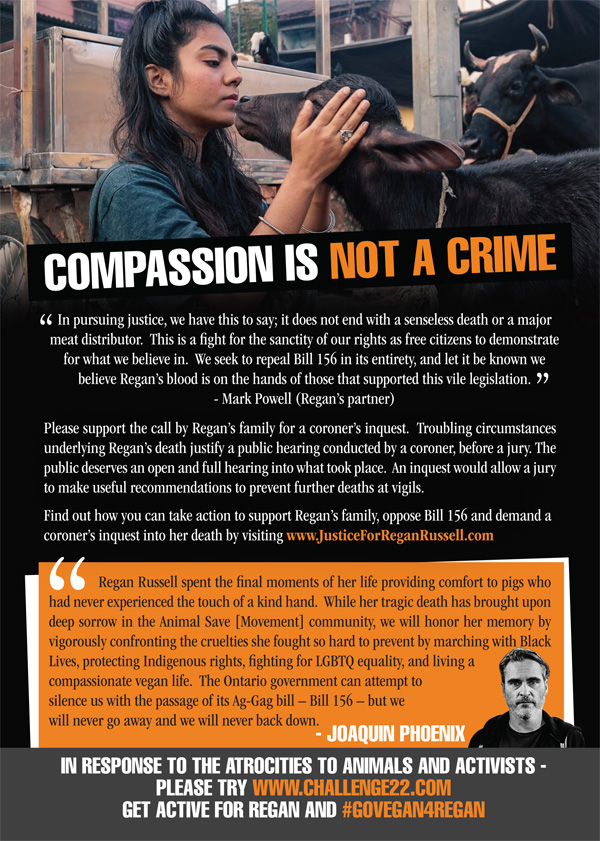 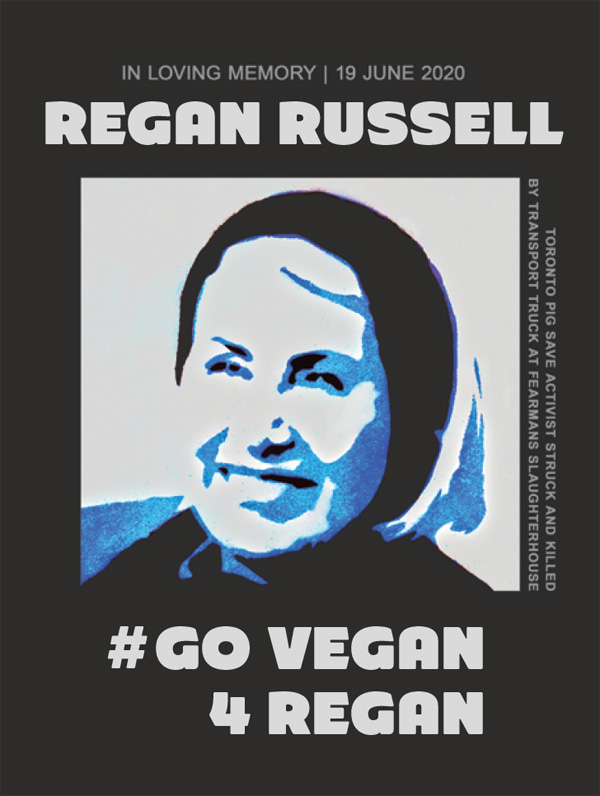 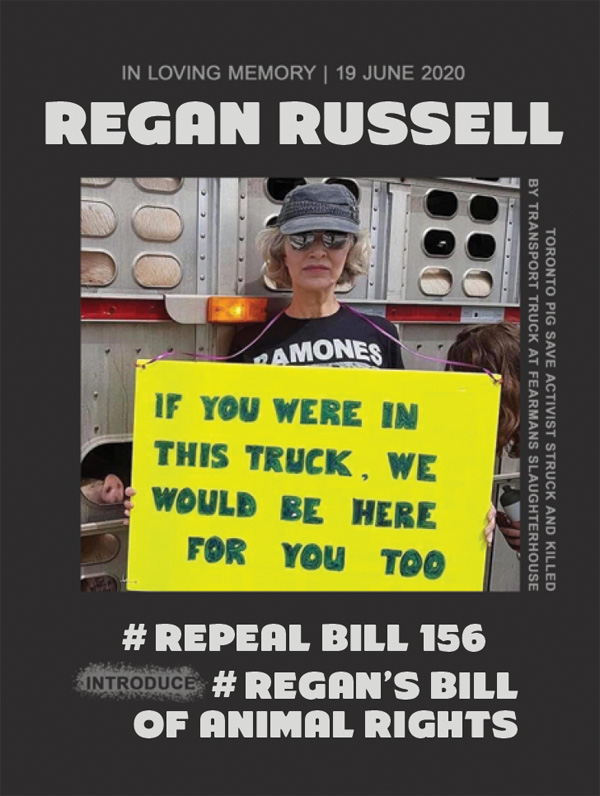 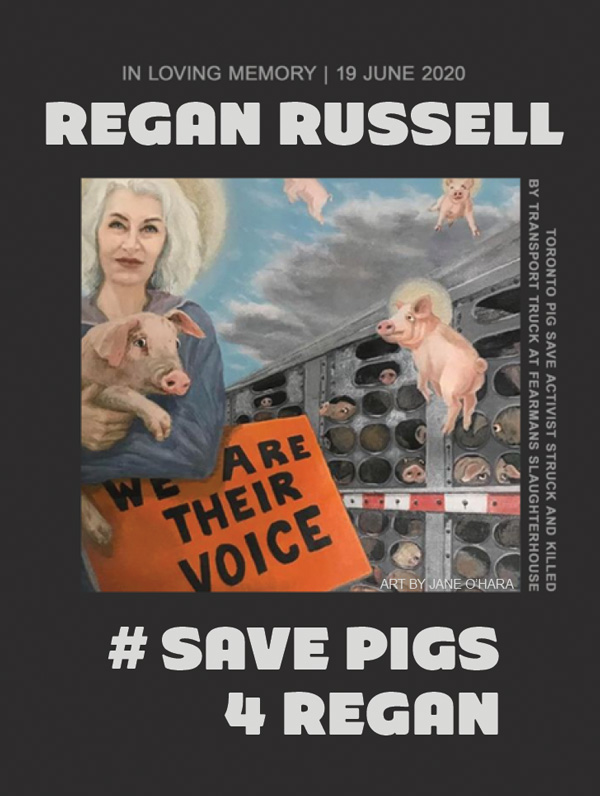 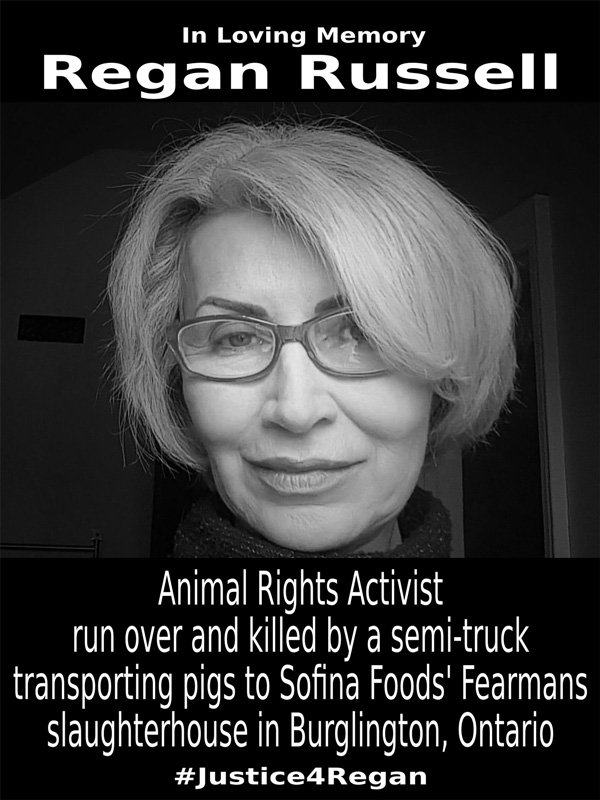 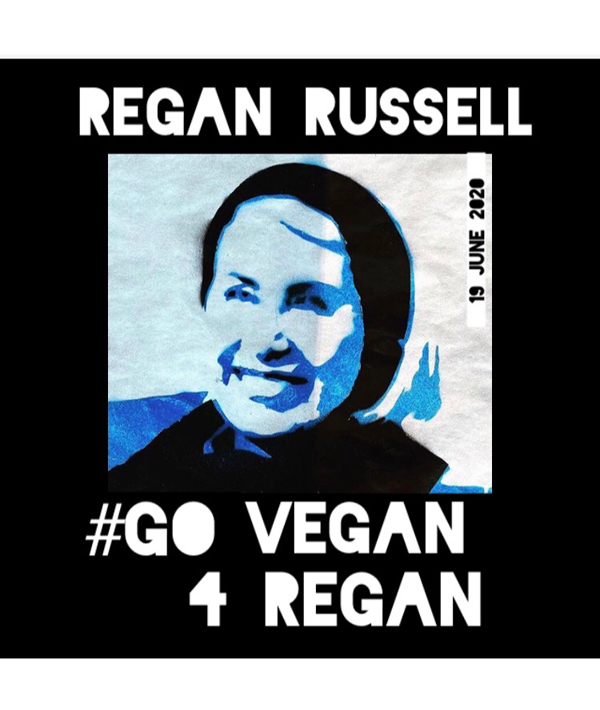 Copy and paste articles on your social media channels.