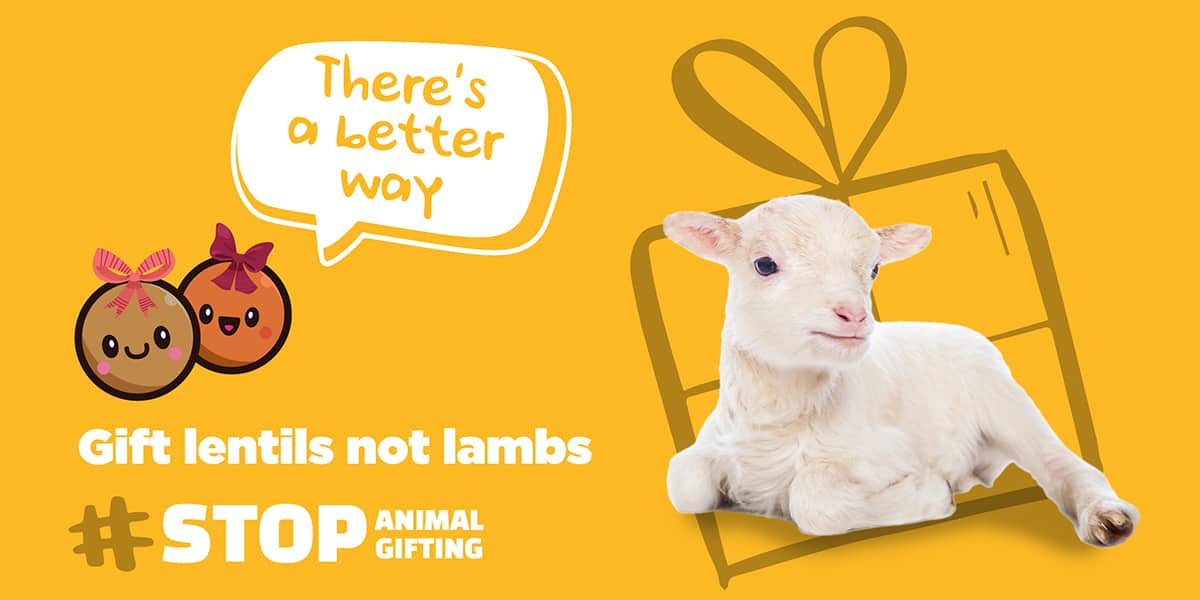 Animal gifting schemes are described by the renowned conservation charity the World Land Trust as, ‘environmentally unsound and economically disastrous’.

What is the problem with “Animal Gifting”?

The clever marketing campaigns run by development aid charities really pulls at the heart strings. They promote animal gifts as perfect for "animal lovers" and sell us women's empowerment as well as solutions to poverty and malnutrition. However, animal gifting has many unintended consequences that remain hidden from the public eye.

When you purchase an "animal gift", you could in fact be gifting a bird flu outbreak, a slaughterhouse, childhood trauma, a climate crisis or a forest fire. In addition to the massive number of animals who suffer in animal farms and slaughterhouses,  your gift could lead to the burning of forests for the expansion of animal agriculture, as well as an increased consumption of animal fat leading to significant health issues, such as diabetes, heart disease and cancer.

In many cases, animals such as goats are introduced into already degraded areas leading to desertification and further human impoverishment. Animal-gifting programs say that gifting a family a cow means they will benefit from "increased dairy production". However, a lactating cow can be an immense burden on families, needing up to 90 litres of water a day as well as lots of food and veterinary treatment to cover problems like diarrhoea, mastitis and lameness.

“In Ethiopia, over 60% of their population is considered hungry or starving, and yet they have 50 million cattle in that country (one of the largest herds in the world), unnecessarily consuming their food, land, and water. More than 2/3 of Ethiopia’s topsoil has been lost due to raising cattle. Many countries elsewhere in Africa and in the Amazonian region that suffer from hunger raise cattle inefficiently at the expense of their soil, localized climate, and other resources while producing a fraction of the food they could if converting to plant based foods. ” – Dr. Richard Oppenlander

Development agencies such as Heifer International and Oxfam market their animal-gifting programs as initiatives that help eliminate poverty. However, in addition to the consequences mentioned above, the reality of what life becomes for these gifted animals is far from what these organizations portray.

In 2018, PETA and Sentient undertook an investigation throughout an area in India called Rajashtan. This is one of the destinations for goats gifted by Heifer. Just like farmed animals all around the world, baby goats were denied their mothers milk. Animals are forced to undergo cruel procedures such as dehorning and castration without any painkillers.

Many are left chained or penned in small spaces or suffer from lingering illnesses or injuries. When gifted animals are no longer considered useful, they face the same fate as other animals exploited by humans across the world, they are mercilessly killed, usually by having their throats slit. Often, just like at many slaughterhouses across North America and Europe, they see their friends being killed right in front of them as they await their turn.

PETA found that basic veterinary care for farmed animals was lacking and often the treatment is left up to the local villagers who are often untrained and unable to provide adequate care. PETA uncovered recipients of gifted animals who admitted they were unable to afford to take care of the animals received.

What are the solutions?

There are many ways to help people in need without contributing to poverty traps, the climate crisis or exploiting nonhuman animals.

In a 2012 article titled The World Hunger-Food Choice Connection: A Summary Dr. Richard Oppenlander, a sustainability consultant and researcher said, “Globally, even with climate change issues and weather extremes, we are producing enough grain to feed two times as many people as there are in the world.”

Gift plant-based solutions, such as a tree, a fruit orchard, seeds for vegetable gardens, a community garden and water irrigation. Additional produce can be used to sell at market bringing a household income to cover school fees and healthcare and overcome poverty. A number of nonprofits have developed plant-based development projects, including A Well Fed World, Fruit Tree Planting Foundation, and Lemon Tree Trust.

Latest IPCC Report Leaves No Room for Doubt: We Need a Plant Based Treaty Now