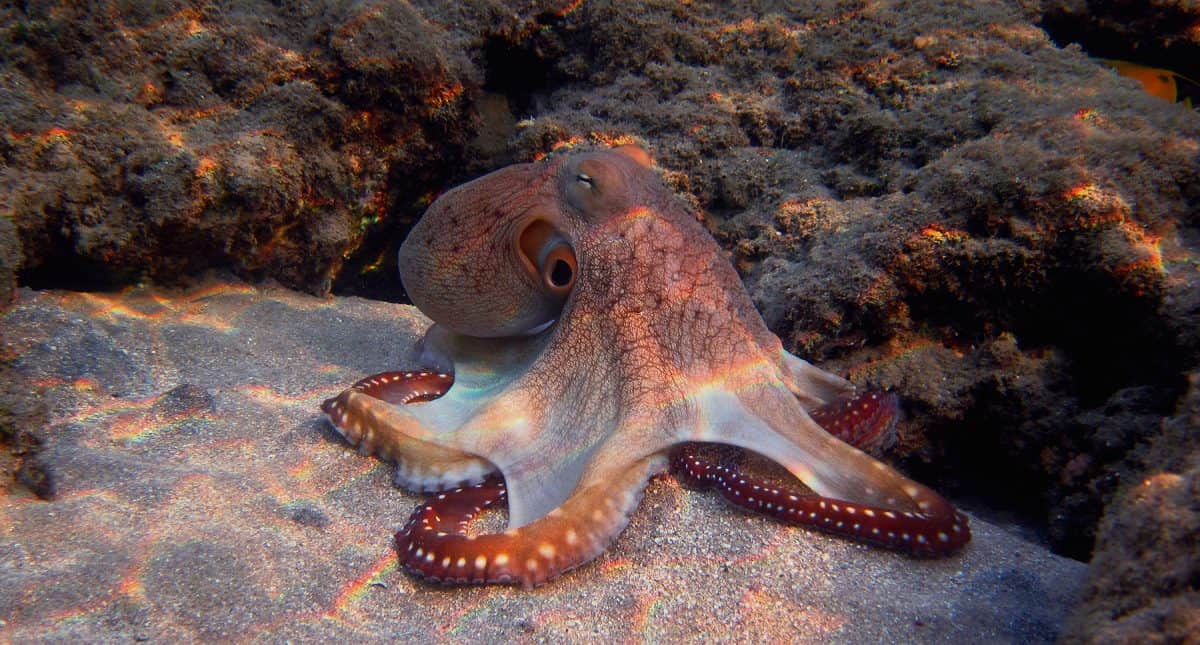 Eating octopus is not only an environmental disaster for our planet, but it is inhumane, cruel, and unnecessary. Like all sentient beings capable of experiencing happiness and pain, octopus want to live their lives in freedom and should not be held captive inside small tanks only to be killed for a meal that will soon be forgotten. Yet the demand for eating octopus is increasing so much that Spanish company Nueva Pescanova is opening the world’s first commercial octopus farm despite scientists warning this form of aquaculture is not sustainable for the planet and extremely cruel. Nueva Pescanova’s website claims they want to “improve the health, sustainability and animal welfare of aquaculture animals.” But commercial production of octopus is environmentally unsustainable. Octopus are carnivores and in order to raise them in captivity they must eat other animals to survive. Calling octopus farming sustainable is greenwashing, because in reality it’s an ecological disaster that will continue to destroy marine ecosystems and fish species the captive octopus must eat before being killed themselves. Similarly to the harmful effects of raising cows and pigs for food on land, the mass production of octopus in water will negatively impact the environment. It also raises animal welfare issues because octopus are highly intelligent and gentle creatures. As consumers we have the power not to support this cruel industry and speak out against unsustainable octopus aquaculture farms.

Nueva Pescanova claims octopus farming is sustainable, yet octopus have a feed ratio that debunks this myth. Fish species are already on the brink of collapse from massive overfishing and any octopus farm will further deplete fish communities living in the oceans.

“Octopuses have a food conversion rate of at least 3:1, meaning that the weight of feed necessary to sustain them is about three times the weight of the animal. Given the depleted state of global fisheries and the challenges of providing adequate nutrition to a growing human population, increased farming of carnivorous species such as octopus will act counter to the goal of improving global food security.” – The Case Against Octopus Farming

For every 3kg of octopus killed, 9kg of fish must also be killed to feed them, making it an unsustainable practice. An octopus farm will further add to the fishing crisis the world faces and will continue to drain our oceans of fish.

Plant Based Treaty endorser Becca Franks, PhD, Research Scientist from the Department of Environmental Studies at New York University and one of the authors of The Case Against Octopus Farming, says, "Octopus farming is a reckless and backward idea that should never become a reality."

Sometimes animals manage to escape factory farms. There are stories of pigs like Yoda jumping to freedom off a slaughterhouse truck, and an entire herd of 30 cows making a mad dash for freedom to escape slaughter. Animals know what is happening to them in captivity and marine creatures like octopus are no exception when it comes to escaping. Inky the octopus escaped his New Zealand tank and headed to freedom down a pipe towards the open water. Octopus may escape from Nueva Pescanova’s octopus farm resulting in negative effects on nearby aquatic animals. This could happen directly through wild species the escaped octopus may come in contact with, or indirectly though unknown contaminants transmitted from the octopus through discharge. If Inky-type escapes or human errors leading to escapes were to happen at Nueva Pescanova, this could lead to diseases and pathogens being passed onto local wild populations in the Canary Islands.

3. Octopus farming adds to the destruction of marine ecosystems

Nueva Pescanova announced they will start marketing farmed octopus in the summer of 2022 with a plan to begin selling their meat in Gran Canaria in 2023. The company released the following statement: “We believe our first responsibility is the sustainability of natural resources and of our partner communities, whose trust we build and maintain by acting ethically…” - Nueva Pescanova, Press Kit

Yet there is nothing sustainable about feeding captive octopus 9kg of fish for every 3kg of octopus flesh they sell. The huge amounts of fish the captive bred octopus will eat before they are killed adds to the destruction of marine ecosystems.

“When too many fish are taken out of the ocean it creates an imbalance that can erode the food web and lead to a loss of other important marine life, including vulnerable species like sea turtles and corals.” – World Wildlife Fund

National Geographic explains; “Decades of harvesting the seas have disrupted the delicate balance of marine ecosystems—despite global efforts to mitigate the damage.”

“Scientists have long been sounding the alarm about a looming catastrophe of ocean overfishing—the harvesting of wildlife from the sea at rates too high for species to replace themselves.” - National Geographic, Environment, Amy McKeever

4. Octopus farming may cause more pollution

Now is the time to cut back on large scale fishing operations, not add to fishing and aquaculture that pollutes our oceans and waterways, leaving behind a destructive path and farmed octopus that need to eat fish.

"Commercial production of octopus farming is environmentally unsustainable. Octopuses are carnivores and other animals must be caught or raised for their food." - Jennifer Jaquet, New York University

When it comes to pollution entering our atmosphere, fishing is not as carbon friendly as what we have been led to believe, as outlined in BBC News.

“…a new study claims that catching fish using heavy nets that drag across the seabed - known as bottom trawling - emits about the same amount of carbon dioxide (CO2) globally as the aviation industry. Seabed sediments that act as huge carbon sinks are churned up during this kind of trawling - and this results in CO2 being released.”

Carbon dioxide (CO2) is a greenhouse gas that absorbs and radiates heat and traps it in the atmosphere.

“The buildup of carbon dioxide (CO2) and other greenhouse gases like methane (CH4), nitrous oxide (N2O), and hydrofluorocarbons (HFCs) is causing the Earth’s atmosphere to warm, resulting in changes to the climate we are already starting to see today.” - The United States Environmental Protection Agency (EPA)

In case you need more reasons not to support octopus farming, it is extremely cruel. There is no humane way to kill an animal for meat that wants to live. Octopus are sentient beings that feel pain and are the world’s most intelligent invertebrate. Octopus not only feel physical pain but are able to experience emotional pain and have feelings of distress and suffering, as is sure to occur in captivity where they are unable to swim freely and do what comes naturally to them like use tools, build dens out of discarded coconut shells, and arrange stones.

A peer reviewed study in iScience called Behavioral and Neurophysiological Evidence Suggests Affective Pain Experience in Octopus concludes octopus learn to avoid sites where pain has been inflicted on them and they display strong negative behavioral changes when faced with pain.

It is 2022 and our Earth is facing unprecedented challenges when it comes to climate change and global warming. We have been told by the Intergovernmental Panel on Climate Change (IPCC) that the next few years are critical and the time for action is now. “We are at a crossroads. The decisions we make now can secure a liveable future. We have the tools and know-how required to limit warming,” said IPCC Chair Hoesung Lee.

Instead of building new aquafarms or slaughterhouses we should be closing the ones that already exist and focus on eating sustainable plants instead.  If Nueva Pescanova truly cared about sustainability and animal welfare they would be planting trees and farming food that grows from the ground and produces oxygen, purifies air, and absorbs carbon dioxide to reduce climate change - not killing sea animals.