Wednesday 3rd November 2021 is a date that is etched on my mind. It was the day I first ever witnessed animals go to their deaths at a slaughterhouse.

We had planned to do a vigil at Sandyford slaughterhouse during our time campaigning for a Plant Based Treaty at COP26 in Glasgow. That morning we made our way to Sandyford to join the rest of the team. We stood at the side of the road with our banners and placards showing animals that had been photographed at other vigils, terrified in the trucks awaiting their fate.

Shortly after we arrived, three trucks full of police jumped out and started trying to intimidate us, asking lots of questions and standing in front of each of us, preventing passing traffic from seeing our signs. We counted 30 police in total from London Metropolitan Police Force. We learned that they had been drafted from London to aid in policing the COP26 event. They had had a call from an anonymous source that had informed them we might be planning to block the nearby motorway! After some time, the police dispersed and left, bit by bit, as they realized we had no intention of blocking any roads. 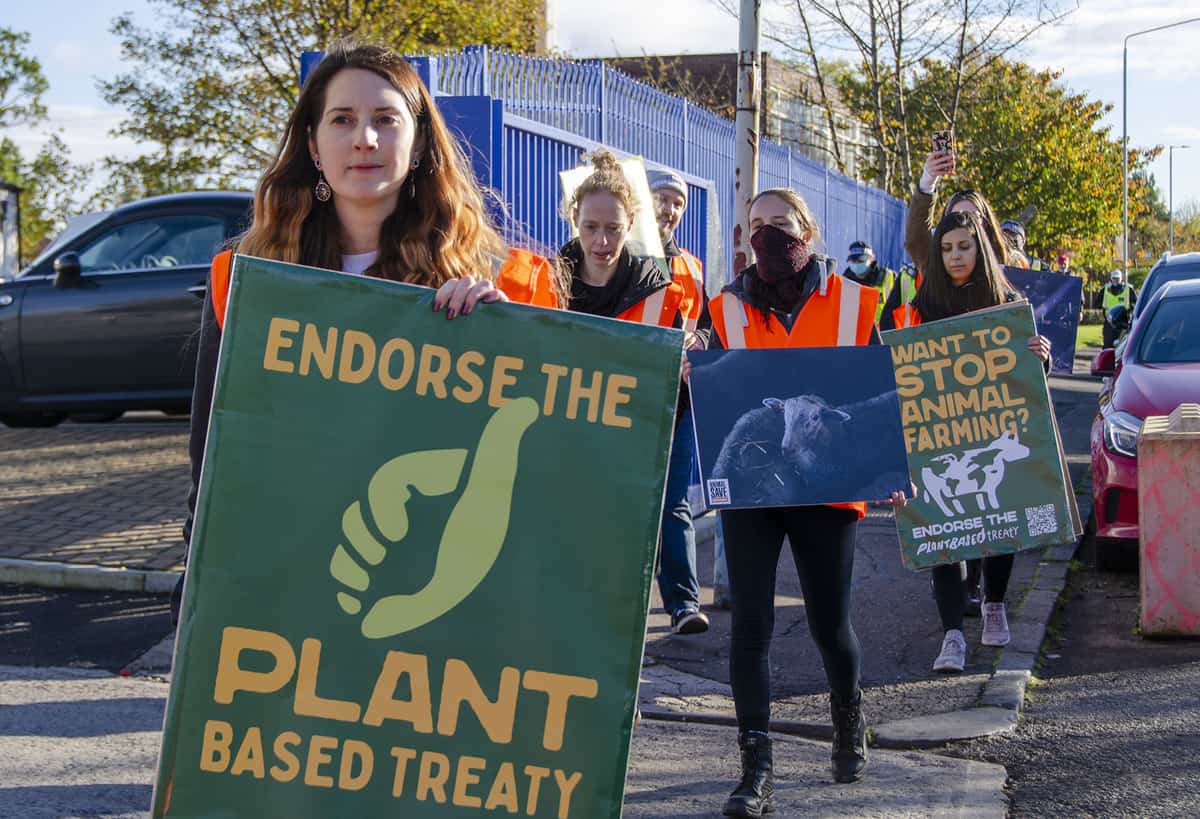 We made our way to the front of the slaughterhouse, out of sight of the main road, hoping that we may witness some trucks with animals entering. But, unsurprisingly, it appeared that they had rescheduled any arrivals that day to prevent us from collecting any footage.

The police did draw the attention of some local press, who took photos of our vigil and published an article in their local paper. And we were interviewed by Supreme Master TV outside the slaughterhouse.

After the vigil, myself and two other Plant Based Treaty activists headed into nearby Ardrossan to the only vegan cafe in the area for some lunch. We reflected on our feelings about being outside the slaughterhouse, two of us had never been to a vigil before, and the other had only been to one a long time ago. Being in that environment did have an effect on us, but we were shielded from witnessing any individual animals going through that process. 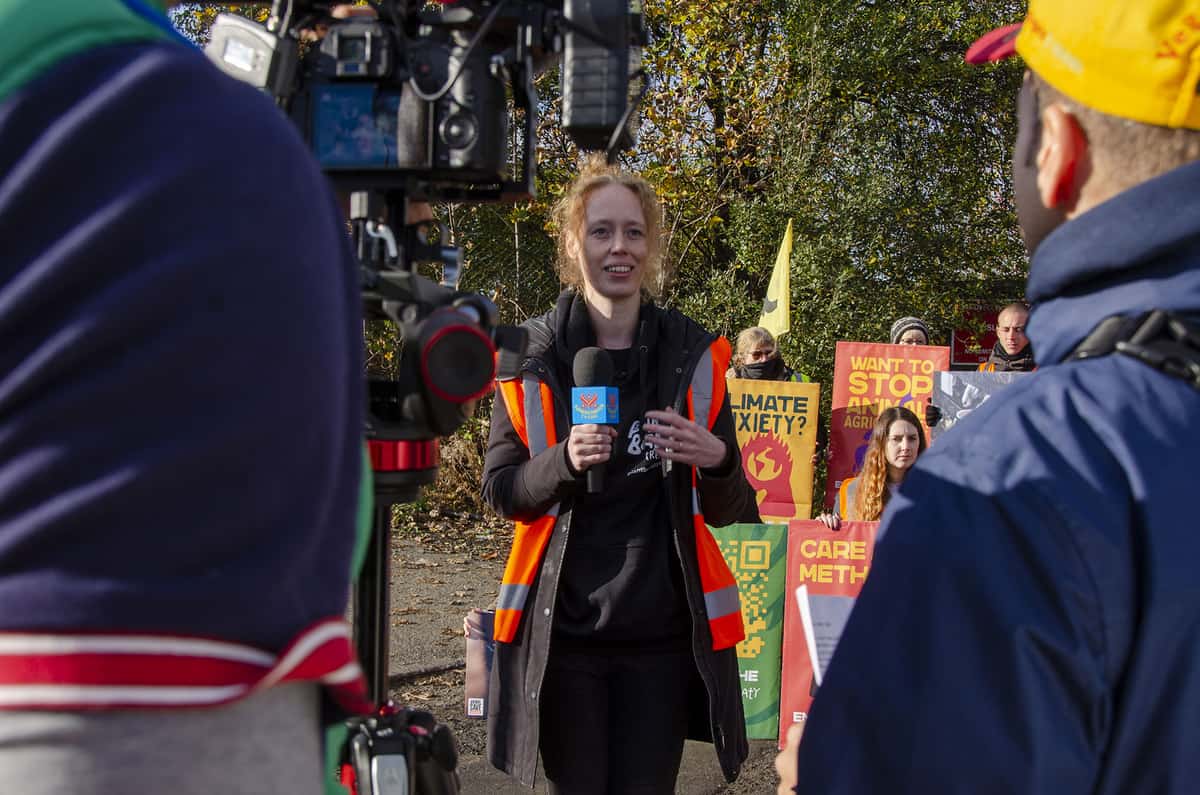 With full stomachs, we left the cafe, intending to head to our next destination. Then suddenly, across the road, we couldn’t believe our eyes—a huge animal transportation truck. Not knowing how to react, we ran towards it, grabbing our cameras from our bags, with our hearts pounding out of our chests. As we approached, the traffic lights changed, and it started to drive off. We continued chasing it down the road until a level railway crossing blocked us. We stood there as the truck drove away. But to our surprise, it started to reverse. We waited, and when the lights changed, we approached the truck, which had stopped outside what we then realized was Ardrossan slaughterhouse. Just one street away from the cafe, we had been happily eating lunch just 5 minutes earlier.

With caution, the three of us crept up to the bars of the truck to witness dozens of pigs squirming around inside. The truck was huge, with what looked like three levels inside. Silent tears ran down our cheeks. We couldn’t believe what we were witnessing. We stood filming for 5 minutes. I recorded a video of two pigs comforting each other, nuzzling and pawing like two puppies.

After those five minutes passed, the truck driver asked us to step away and let him drive into the slaughterhouse grounds. Helplessly, we stepped back. We were weeping and hugging, knowing that we couldn’t do anything to save them. Then, after some time, we witnessed the clamber and screaming from the pigs as they were pulled from the truck and shoved into the building. I can still hear them screaming in fear, with the pure stench of death awaiting them—170 pigs in total. 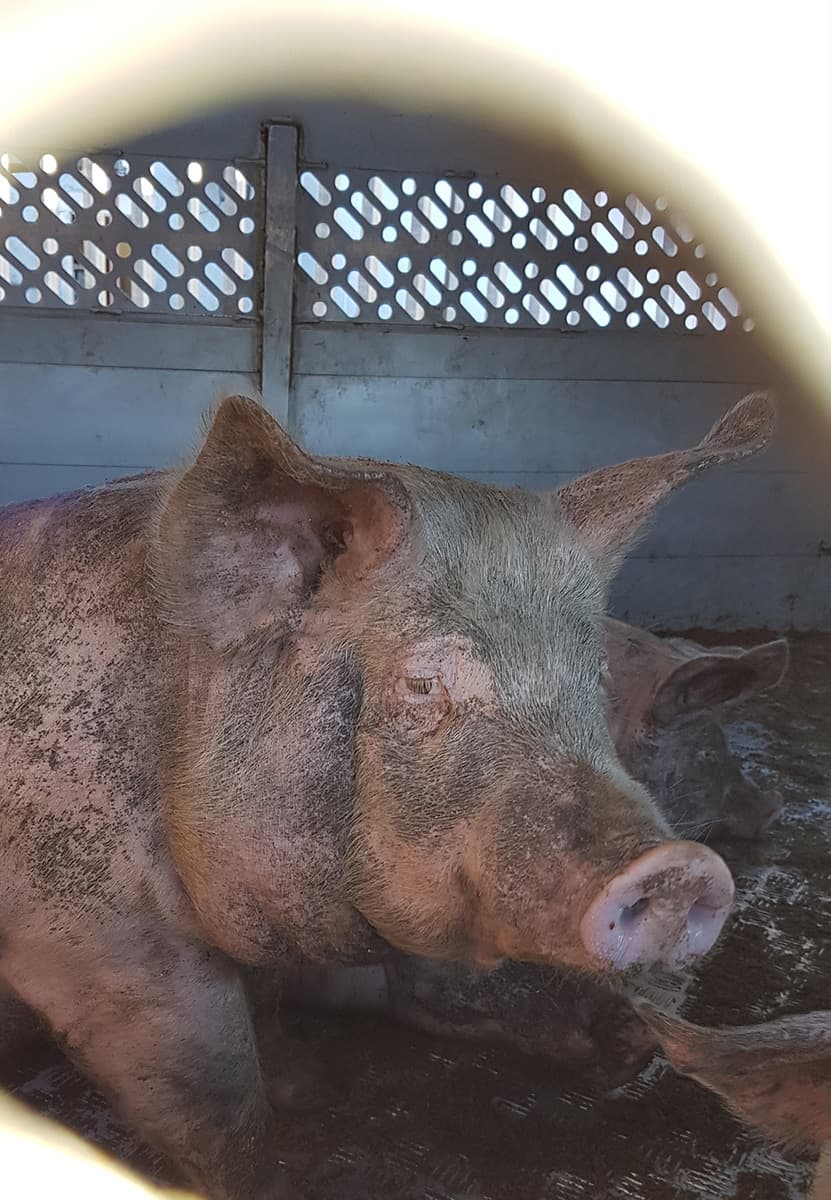 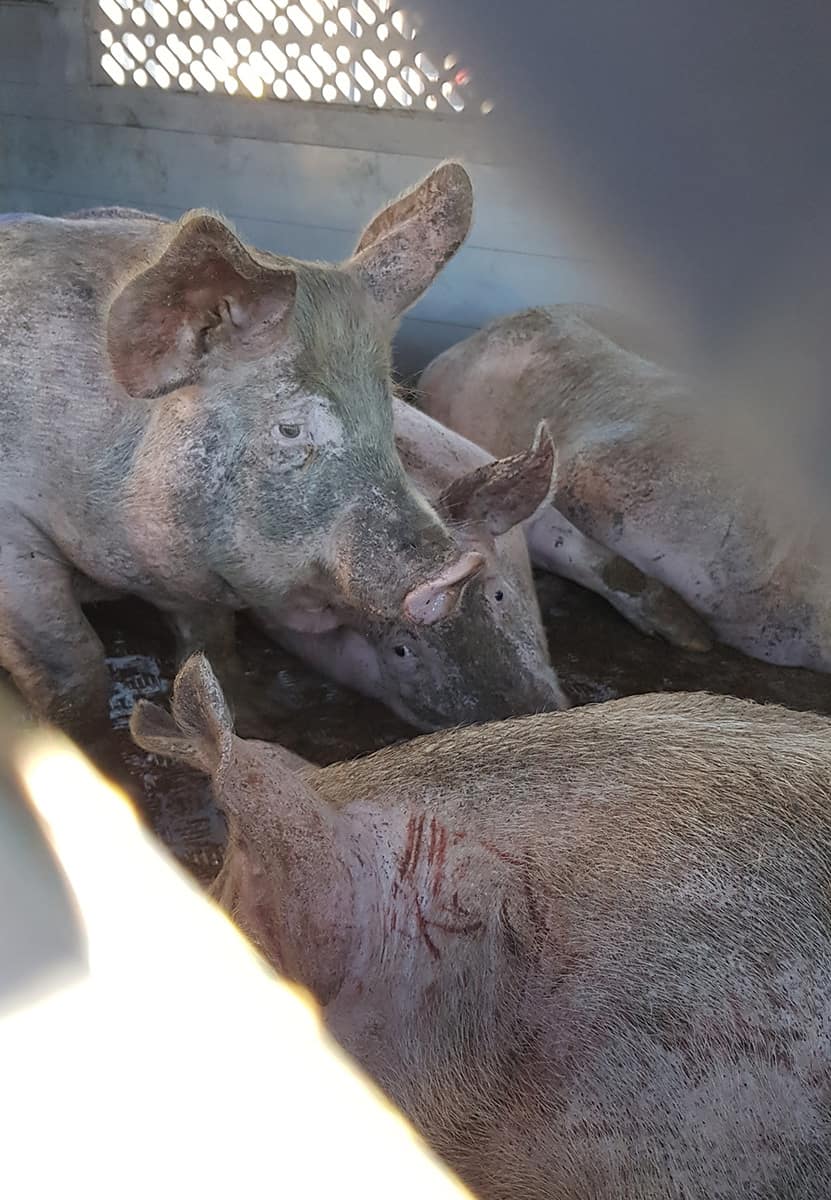 As I stood there, crying and filming, I felt someone watching me. One of the workers was standing behind me. I turned to him and asked, “how do you do it? Isn’t it awful?” he responded, “I’ve been doing this for over 20 years; if I don’t do it, someone else will.”

We proceeded to have a long conversation. It was a really strange feeling to talk to someone who would be inflicting so much pain and suffering on those very pigs. I wanted to know how such a seemingly nice, ‘normal’ person could do such a thing. I tried my best not to ask leading questions, but to listen and understand, in a bid to have a better understanding of how we can change it.

He was brought into it by his family, who worked as slaughterhouse workers for generations. He was the person who was in charge of animal welfare and considered himself an animal lover. It was down to him to make sure those animals didn’t “suffer unnecessarily.” I asked him if people stopped eating meat, would he be willing to change his work to a plant-based food system. He said he was ready to change if there was a demand.

Those pigs we bore witness to are dead now. That’s a harsh reality to absorb. Could we have done more to save them? In today’s society, I don’t think we could have. The only way to save their future ancestors is to move towards a plant-based food system.

Three things you can do to help: