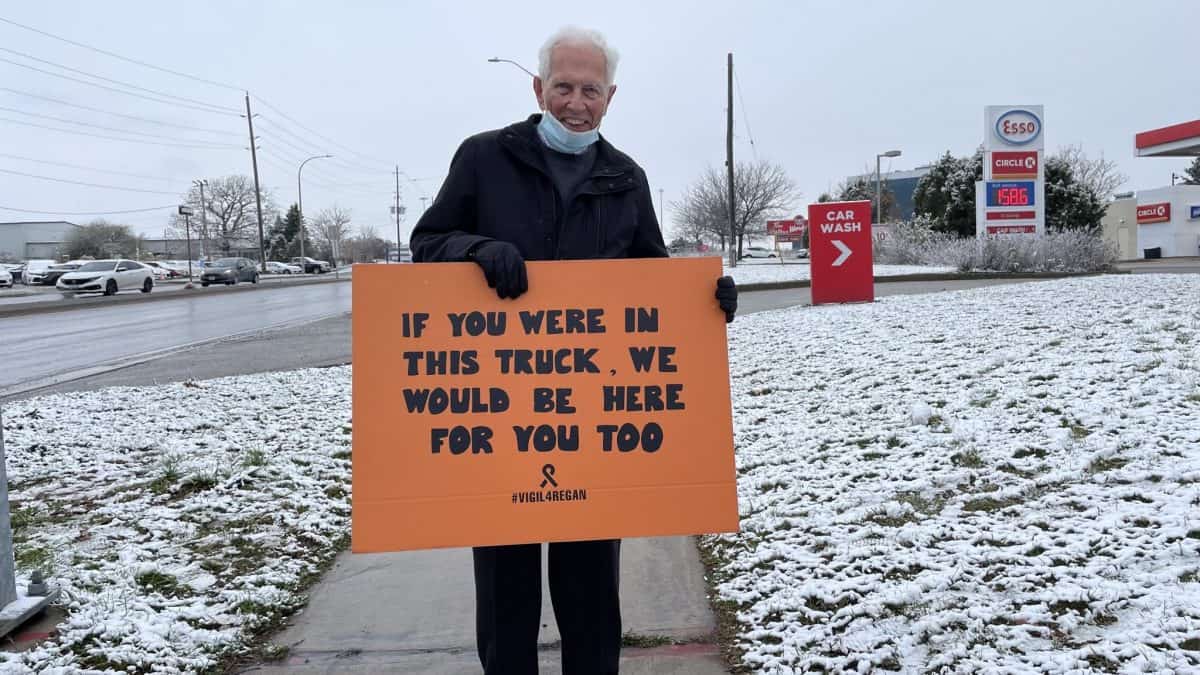 Regan Russell was a passionate and caring animal advocate and firmly believed all life was worth fighting for. On June 19, 2020, she was at a Toronto Pig Save vigil with six other activists giving desperate pigs water on a hot day and providing them comfort, likely the only love they ever received. She was in front of Sofina’s Fearmans slaughterhouse in Burlington, Ontario when she was brutally struck and killed by a pig transport truck. Russell regularly attended pig vigils but on this particular day she was there to oppose Ontario’s “ag-gag” Bill 156, which had passed two days earlier. This controversial law is designed to cover up animal cruelty including on farms and during transport to slaughterhouses. Fearmans violently kills 10,000 sentient beings at their slaughterhouse daily. 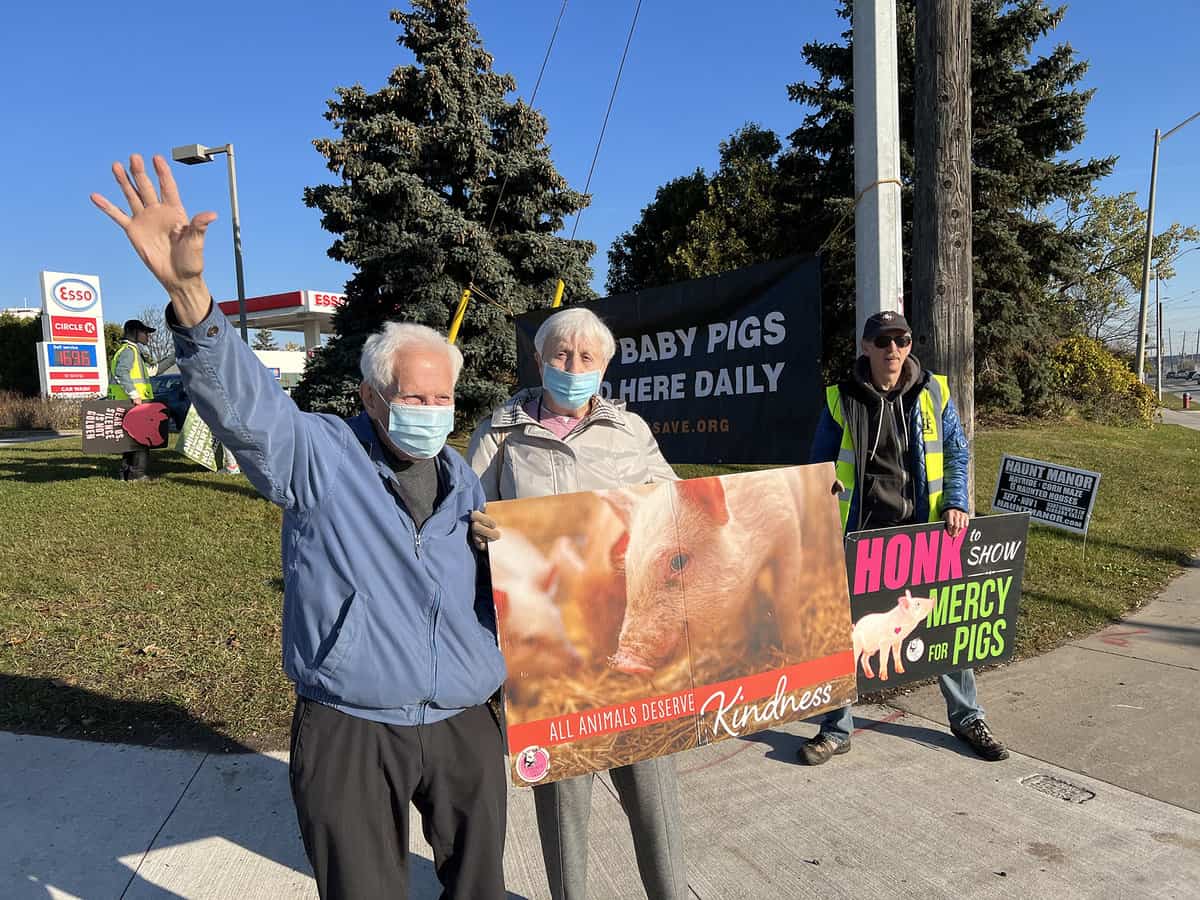 Bill and Pat Russell outside Fearmans Slaughterhouse, Burlington, at a pig vigil on November 2, 2022

Now, more than two years since Regan’s death, her parents, Bill and Pat Russell, continue to honour her memory as Bill celebrates his 92nd birthday. Bill plans to attend a Toronto Pig Save vigil and he recently wrote a letter to Ontario Premier Doug Ford to overturn “ag-gag” Bill 156. Animal activists around the world are continuing to keep Regan’s memory alive and honour her passionate commitment to raising awareness for all creatures by speaking out against the controversial Bill 156, attending vigils to bear witness, celebrating animal rescues, and going vegan for Regan. Here are five ways you can help keep Regan’s memory alive. 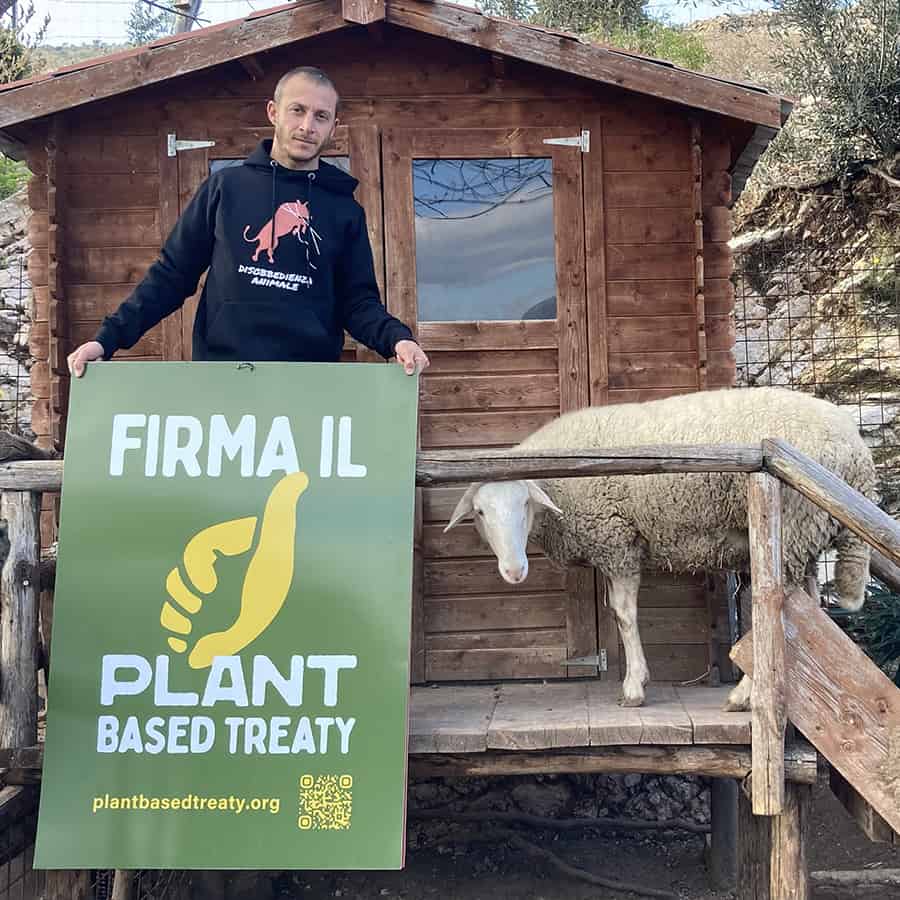 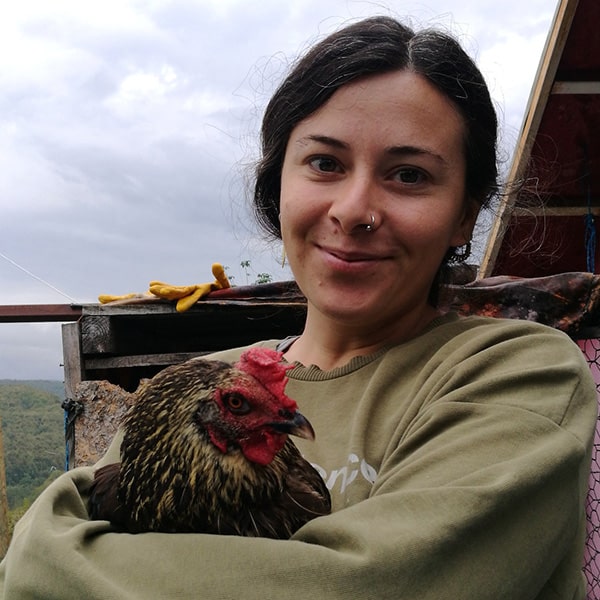 Regan believed all life was worth fighting for and was passionate about rescuing as many animals as possible. Regan’s parents told me over the phone that when Regan was younger she helped rescue a chicken.

“Regan had a chicken named Annie. On the way to slaughter the chicken fell off the back of a truck. Regan took the chicken and brought her home, the most delightful chicken you have ever seen. She was so cute, she would go out in the garden when I was digging and look for worms and she would have a dust bath”, Pat fondly recalls. Bill adds laughing, “I made a room for Annie in the basement and she loved it.”

Regan understood at a young age that chickens, like all animals, deserve love, kindness, and freedom, not to be held captive on a factory farm in a battery cage, unable to spread their wings or do anything that is natural to them. Activists around the world rescue animals in Regan’s honour because they believe a nonviolent world is possible. Istanbul Animal Save rescued a chicken at a vigil from a slaughterhouse and named her Regan. She is now happy, safe, and free forever, and will not end up on someone’s dinner plate.

“We named her Regan to honour the memory of Regan Russell, who was killed by a slaughterhouse truck during an animal vigil held by Toronto Pig Save on June 19th, 2020.” - Doğa Giray, Istanbul Animal Save Group Coordinator

In June 2021, activists in Italy liberated Regan the sheep from ILCO in Acquapendente, one of the largest sheep slaughterhouses in Europe that slaughters around 800,000 animals each year. The rescue was carried out in honour of Regan Russell through dialogue with the slaughterhouse owners.

“Regan the sheep shows what we try to expose in the current violent and unsustainable food system. His gaze right after the first moments of freedom has shown us the individuality, the will to live and the resilience of all imprisoned and exploited animals.” - Simone Scampoli

Regan’s memory continues to live on in the animals that have been rescued in her honour. 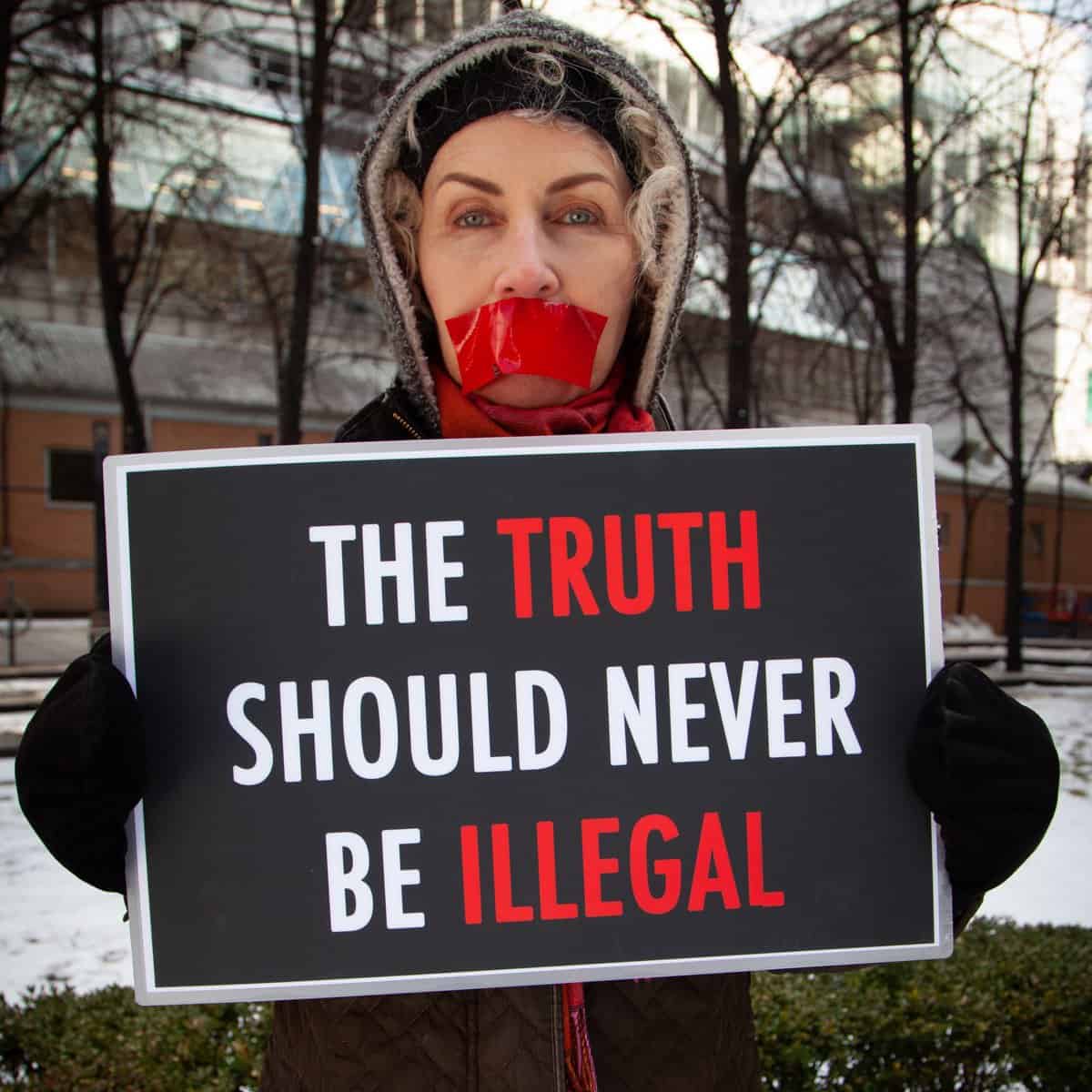 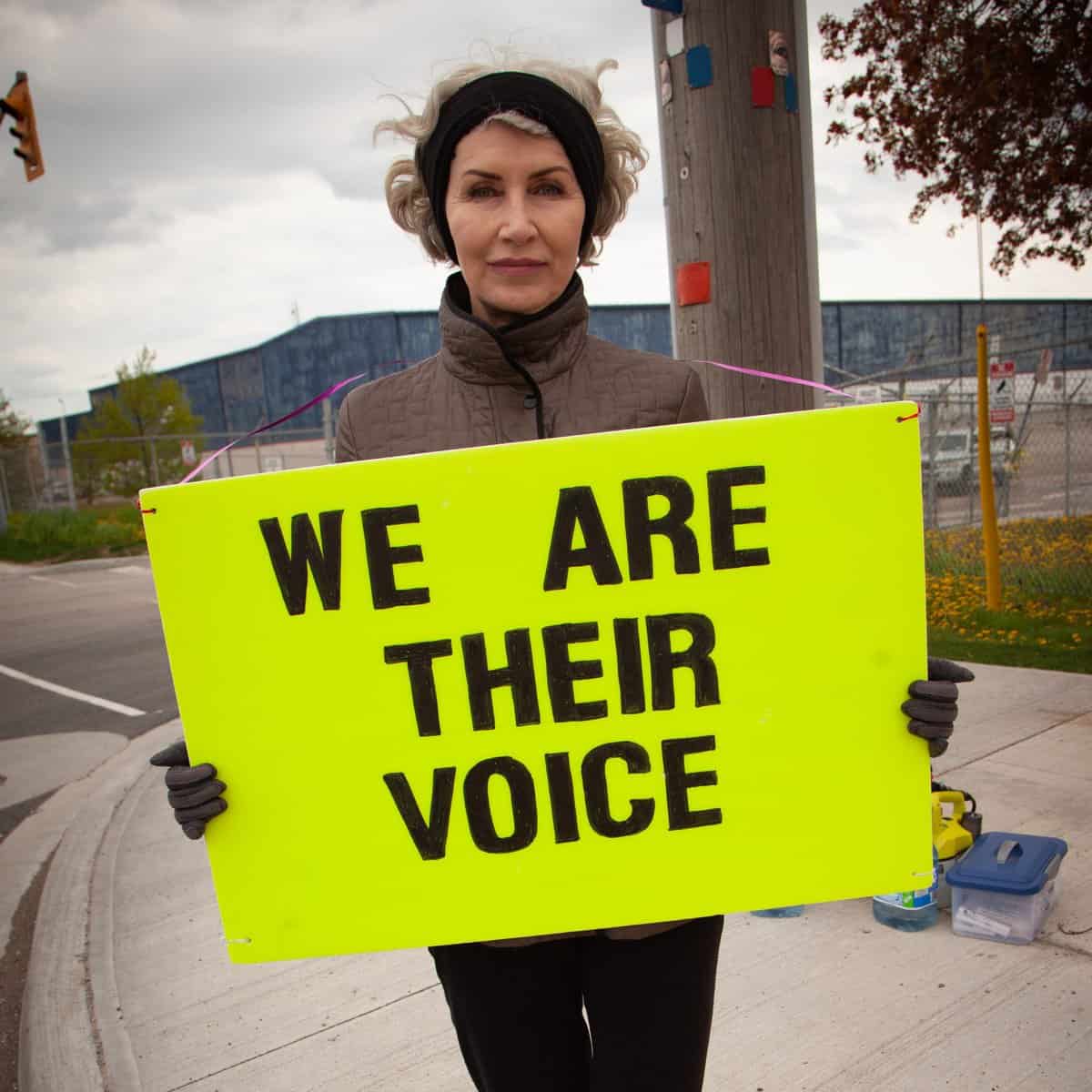 “Ag-gag” Bill 156 is a dangerous piece of legislation designed to criminalize whistle-blowers, journalists, and activists from performing their vital role in exposing the horrific treatment of farmed animals. It specifically targets groups such as Animal Save Movement and those who peacefully bear witness to farmed animals outside slaughterhouses, provide water to dehydrated animals, and document their suffering.” –Animal Save Movement

This is the law Regan was protesting when she was struck and killed outside Fearmans slaughterhouse.  Bill marked his 92nd birthday by writing to Ontario Premier Doug Ford to overturn “ag-gag” Bill 156, the Security from Trespass and Protecting Food Safety Act. The controversial legislation restricts people’s ability to expose animal cruelty on farms by criminalizing whistleblowers.

“If people know more about this law, as Regan wanted them to, then maybe they will ask questions when an election comes.” Bill continues to tell me passionately; “Feeding water to those poor pigs, why would they not be able to have some sort of relief?” 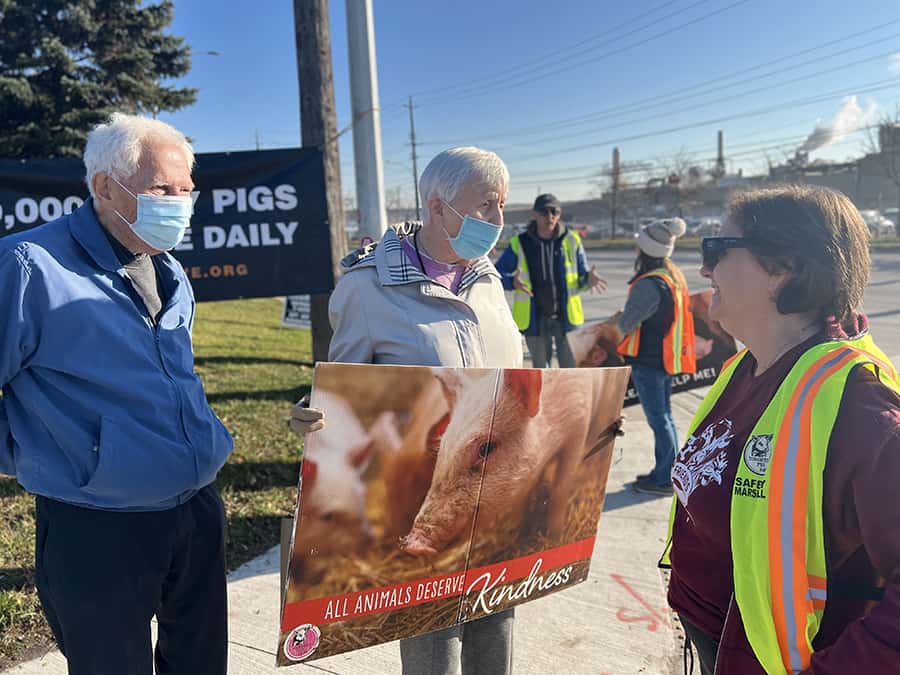 Bill and Pat Russell at Fearmans Slaughterhouse during a pig vigil on November 2, 2022 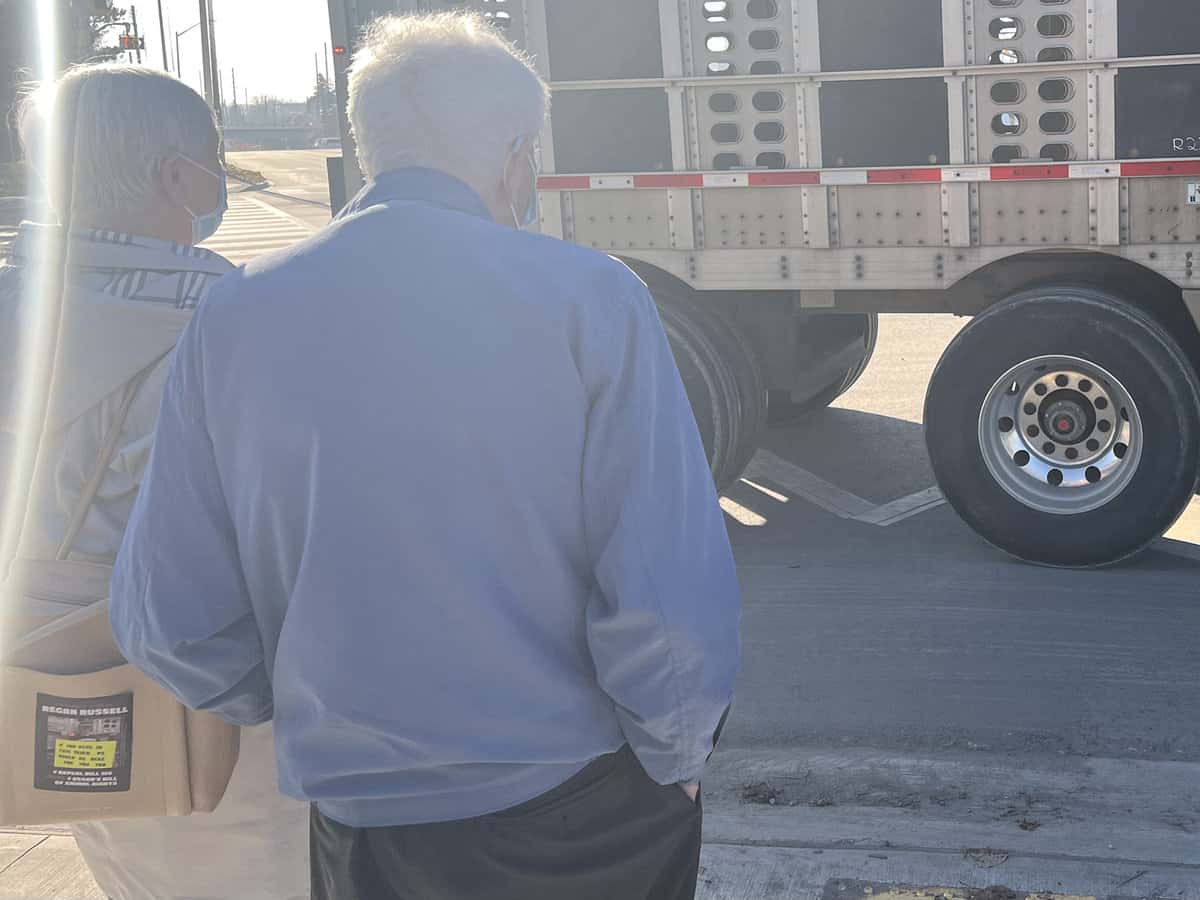 Bill and Pat Russell have frequented Toronto Pig Save vigils at Fearmans slaughterhouse and stood in solidarity with other activists. On Wednesday, December 7, 2022, a day after his 92nd birthday, Bill attended another Toronto Pig Save vigil in front of Fearmans pig slaughterhouse in Burlington. Bill confides that it’s difficult when you hit the nineties to stand in the rain and the cold, but they stay as long as they can and give encouragement to people there. This is a true testament to their kindness, dedication, and passion. Pat explains, “It’s just astounding to see the young people standing up for what they believe. They are so brave to do this, stand there, and cars go by and they honk the horns in support and it gives people hope.” Bill adds, “I am astounded that our presence [at the vigil] inspires people, we talk about our daughter, the way we knew her and loved her, we can have a little corner of being able to do that. I think we have carried on her memory and her dedication to animals.”

Animal Save Movement holds vigils around the world to bear witness to animals on the way to slaughter. If there is not a Save group in your town perhaps consider starting your own chapter in Regan’s memory. 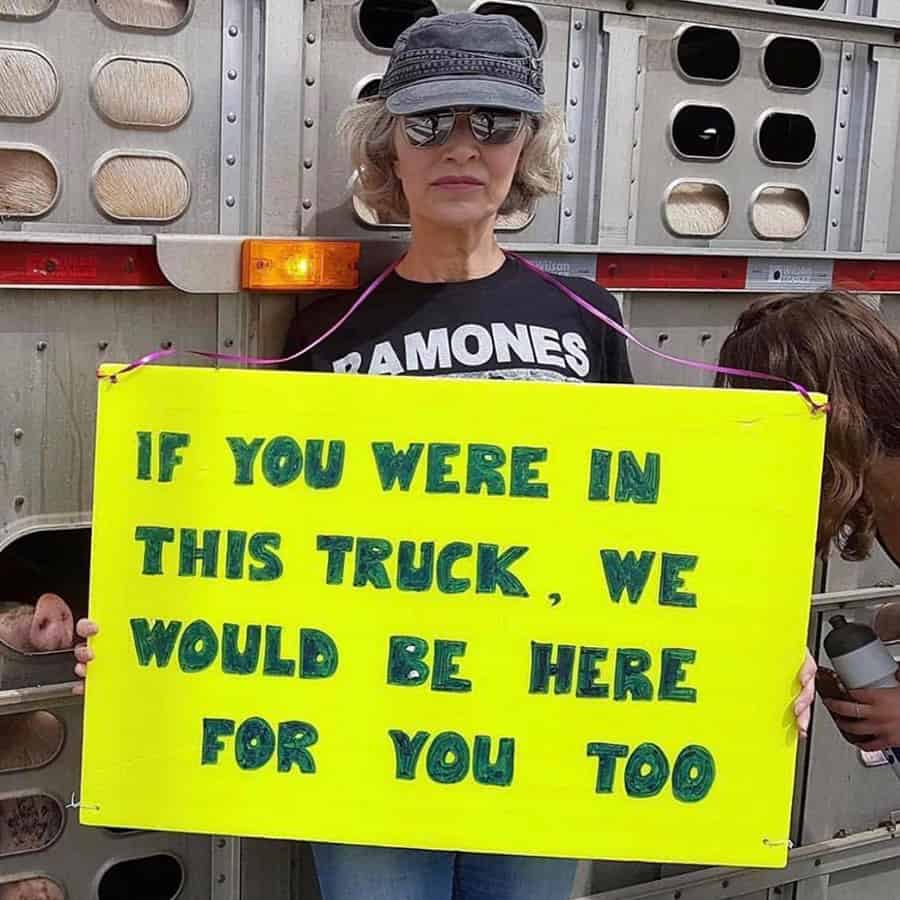 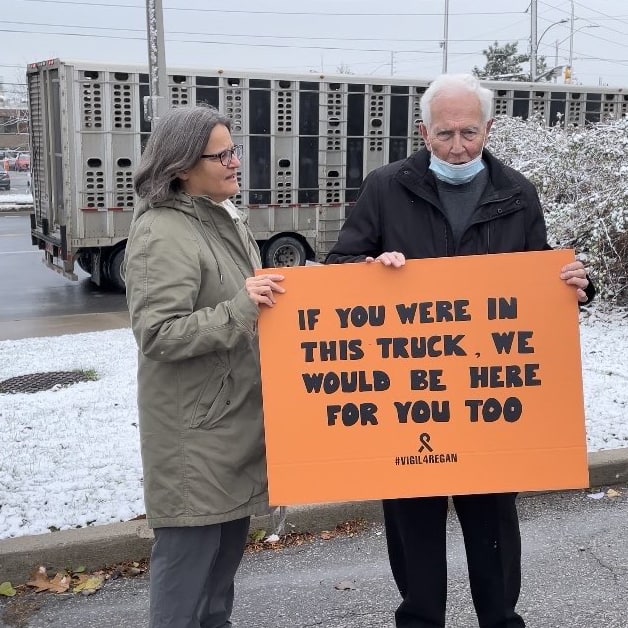 Regan was a social justice and animal advocate from a very young age and believed all life was worth fighting for.

“[Regan] was arrested on 11 occasions for various acts of nonviolent civil disobedience, stating, “People say we’re breaking the law… How do you think women got the right (to vote)? How do you think slavery was abolished? People stood up and broke the laws — because they’re stupid laws.” – Animal Save Movement

Bill became vegetarian in the 1980s after Regan gifted him a copy of Peter Singer’s Animal Liberation and told me how this changed his life. “I read it in two weeks in England,” he explains, remembering fondly how much his daughter cared about animals. “I can remember my last steak that I ate before I read the book, when I came home I was vegetarian.” Not only did Bill become vegetarian but he attended protests with Regan and was arrested at a fur protest at the Eaton’s salon in Toronto in December 1987. “The first protest I went on was with Regan, she helped organize it, 24 people were there…, we went to the fur salon in the Eaton Centre. We would drift in like customers, sit down on the floor, say nothing. We were protesting the furs. Security came and told us to leave and threatened to call the police. The police came and ordered us out, we would not get up from the floor, so they “helped us” out. I was the eldest person with them. I will never forget it, I was petrified,” Bill recalls.

If attending protests is not for you, there are many other ways to get involved and be the voice for animals. Check out this activist toolkit to learn more.

Go vegan for the animals, for the earth, for your own health and for activists like Regan that dedicated their lives to stopping animal abuse and exploitation. Join the Go Vegan for Regan Facebook page to see how others are keeping her memory alive and watch documentaries about Regan such as There Was A Killing by animal activist and filmmaker Shaun Monson, writer and director of Earthlings. Endorse the Plant Based Treaty and commit to learning about shifting to a sustainable plant-based diet to actively reverse damage done to critical ecosystems from animal agriculture. Doing something is always better than doing nothing and Regan knew this. As I was getting off the phone with Regan’s parents, Pat told me a quote that Regan often used to say. They had this quote engraved on her headstone. “I am trying, I don’t know if it does any good, but I know doing nothing does no good.”