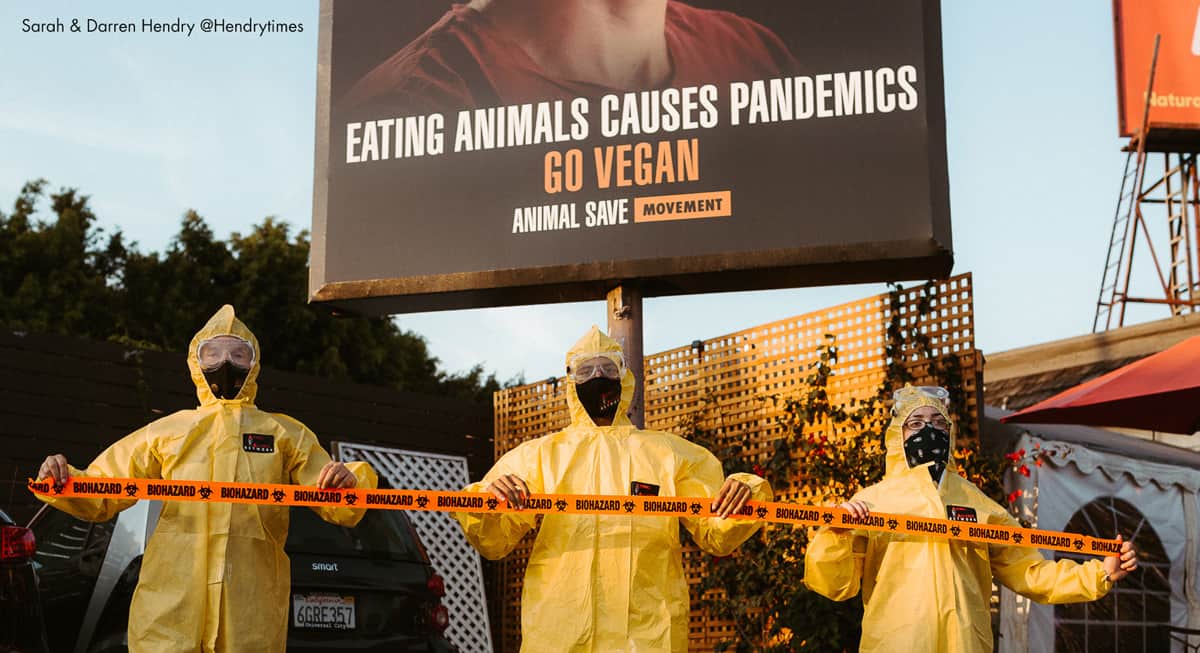 About 60% of human diseases and 75% of all emerging infectious diseases are zoonotic.

Most are caused by harmful germs from farmed animals such as cows, pigs, chickens, goats, sheep and camels. Others are from wildlife such as bats, rats and civet cats. These germs can spread to people and cause illness and are known as zoonotic diseases or zoonoses.

The current COVID-19 pandemic strikes just 100 years after the Spanish Flu pandemic which infected a third of the global population and killed 50 million people. Twenty years ago, the Swine Flu pandemic claimed 284,000 lives. The new coronavirus, COVID-19 was first detected in China with the epicentre in Wuhan, China. It has crippled the global economy, global travel and tourism, businesses and healthcare systems worldwide and the situation is continually evolving with outbreaks in over 200 countries and territories. Many countries have taken extreme measures to try to mitigate the spread of infection including closing their borders and mandating 14 day quarantines to all travelers returning abroad.

The source of the infection is suspected to have originated from infected wildlife at Wuhan's largest wet market, a gory arena where dead and live animals are slaughtered and sold. The widely unregulated wildlife trade is a breeding ground for many deadly diseases including SARS (Severe Acute Respiratory Syndrome) which originated from civet cats in China. The Wuhan wet market, which has been temporarily shut down, was occupied by hundreds of vendors who sold live fish, turtles, snakes, various sea creatures, rabbits, wolf pups, civet cats, dogs, bats, bamboo rats, pigs, chickens and others. China and other countries have now begun to shut down the wildlife trade in an attempt to control the spread of COVID-19. Despite their efforts, the virus has spread to 211 countries within months and has already infected over 100 million  individuals worldwide as of April 30, 2020 and claimed over two million lives. Approximately 10-15% of cases progress to severe disease, and about 5% become critically ill. The fatality rates seem to be highest in those who are in their 70s and 80s, and individuals with underlying conditions and chronic diseases such as diabetes, asthma, and heart disease.

Deadly diseases spreading from animals to humans is not new. If you look below, you will find some of the killer zoonotic diseases and there are hundreds more including Salmonellosis, E. Coli, HIV, Giardiasis, Japanese Encephalitis, Leprosy, and Tuberculosis. The list will only continue to grow if humans do not change their dietary habits. Contrary to what most people believe, eating animal flesh is not healthy. In fact, it poses some of the most serious dietary health risks, some of which are fatal.

Adopting a plant-based diet not only drastically reduces and in some cases eliminates our risk of zoonotic diseases, it is also supportive of a much more robust immune system. A whole foods plant-based diet equips us with the nutrients essential to fight off infections and to prevent chronic disease. Many nutrients such as Vitamin C, Vitamin A, quercetin, magnesium, bioflavonoids and phytonutrients are found primarily in plants.