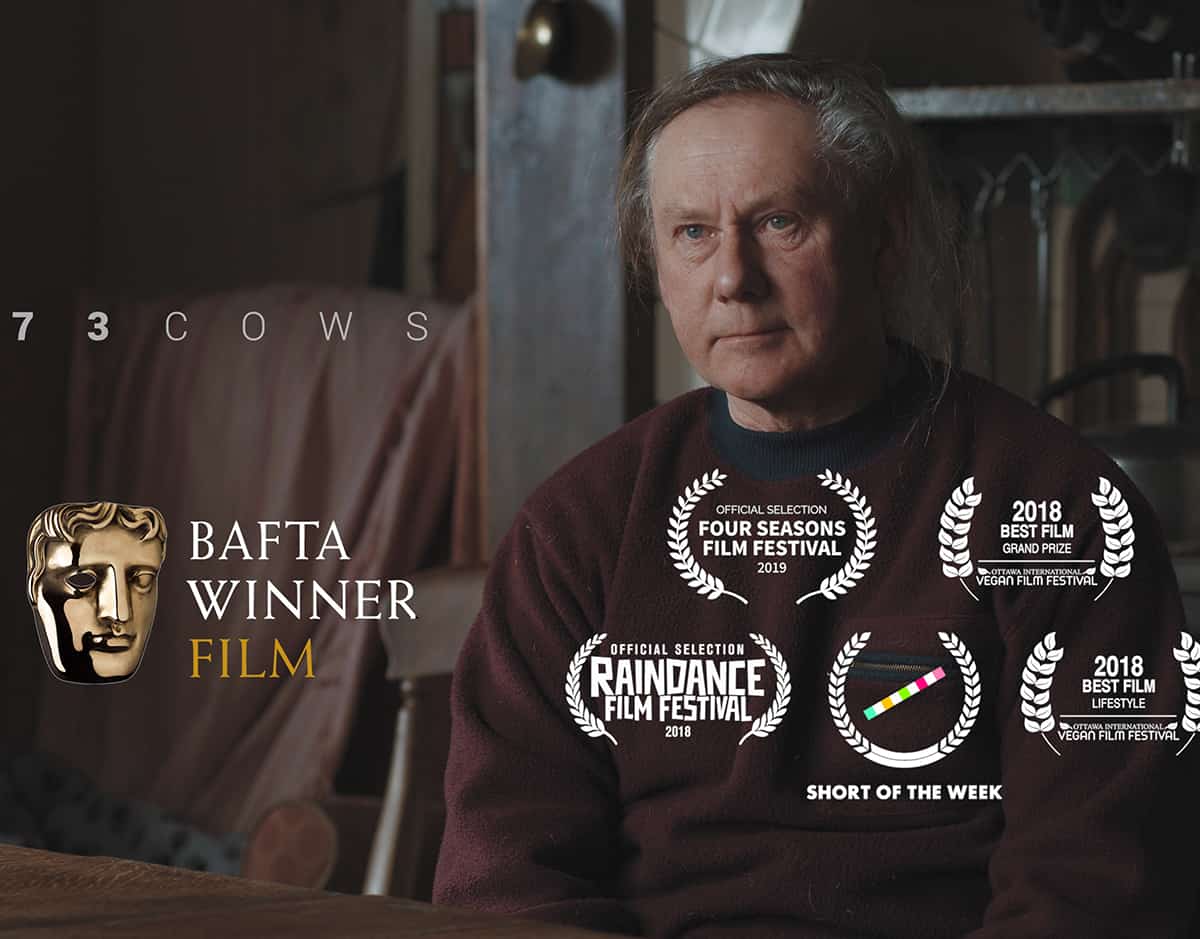 Animal agriculture is destroying our planet and innocent lives every single day. But it doesn’t have to be this way. There are other options and people and organizations around the world are stepping up to help farmers transition from animal agriculture to growing healthy and sustainable vegetables.

Jay Wilde is proof that people can change. This former UK beef and dairy farmer inherited his father’s business and took over the working animal farm, despite his personal conflict as a vegetarian. Wilde saw animals as living breathing beings but tried to keep running the family farm despite his inner turmoil when it came to sending cows to slaughter. But it just didn’t feel right to him. As time went on it only got worse as Wilde explains in the short powerful documentary film, 73 Cows, by talented filmmaker Alex Lockwood.

“You realize that they do have personalities. They experience the world…It was soul destroying.”

“I couldn’t sort of disconnect that feeling of having to get the job done from the fact that they were individuals rather than just units of production”. Jay Wilde, 73 Cows

Wilde saw the cows on his farm as individuals with feelings, emotions, and the ability to bond with others. He knew he was betraying them as a cattle farmer but didn’t see a way out of his situation. His wife, Katja, who also appears in the film, supported him when it came to changing the focus of their work and lives. The challenging part was figuring out how to transition their lives and create a business that did not exploit animals. Experts from The Vegan Society and Vegan Organic Network went to the Wilde farm and together they discussed growing plant foods instead of raising cows to be killed.

Vegan Organic Network is an organization in the UK concerned with ethical and climate friendly food production. They aim to educate people about how their food is grown, encourage companies to source ingredients from vegan farms, and network with growers locally and around the world. But most importantly for Wilde, they help farmers transition to vegan farming.

“Veganic growing is but one aspect of a dynamic culture. Our commitment is to peace and justice for people, animals and the environment in a sustainable balance. To achieve this we must change our lifestyles and introduce a philosophy which will continue to maintain our unique planet. We are motivated by our awareness of the great unease in society that we are moving towards a world that can no longer sustain life in the natural way it has always evolved.” – Vegan Organic Network

73 Cows from Alex Lockwood on Vimeo.

With their assistance, Wilde became the first farmer in the UK to transition from cow farming to organic plant-based farming. Breeding animals for slaughter was replaced with growing vegetables and Wilde and his wife switched to a vegan lifestyle. But what do you do with 73 cows once you decide not to send them to slaughter? Well, you find them loving forever homes, of course. But that’s a lot of cows to find homes for and no easy task.

Despite this challenge, Wilde knew that selling the cows to be killed would not be a good beginning for his new adventures in vegan farming. The Vegan Society got to work and tried to find homes for the cows at various sanctuaries across the country. It was nothing short of a vegan miracle when Hillside Animal Sanctuary in the UK offered to take the entire herd of cows. After the cows moved to their new home they were featured on BBC Countryfile for their moment of glorious fame.

When you make kind choices you inspire others. It turns out a retiring farmer watched the news story of Jay Wilde sending his cows to Hillside Animal Sanctuary and wanted to send her cows to the sanctuary too. Farmer Jill Smith from Ireland reached out the sanctuary, made a public appeal, and with the help of an Irish animal welfare group was able to send her entire dairy herd of 70 cows to live out the rest of their lives at Hillside. That’s a whole lot of happy cows.

So many of the animals at Hillside Animal Sanctuary have been rescued from the farming industry. This happy refuge is home to over 4000 animals including 425 cows, 600 sheep and goats, 350 pigs, 2000 horses, ponies and donkeys and many birds.

73 Cows won the 2019 BAFTA Award for Best Short Film and you can watch it online for free here or above.

Other farmers have also chosen compassion and switched over to growing veggies. Jennifer and Rodney Barrett were long time chicken and cow farmers in Southwest Arkansas and worked in the livestock and cattle business for two decades. After a life altering wakeup call, they realized just how awful these industries are. Their journey to heal, both emotionally and physically, started when Rodney faced health issues and they started on a path to a plant-based diet. In a 2019 article Jennifer wrote for Free From Harm, she explains their transition out of animal farming.

“I slowly started to realize that what we were doing was wrong. I remember standing in one of our chicken houses the day before they went to slaughter and feeling so heavy with grief that they were all going to die…and for what?”

“I started to see the chickens differently. I’d never really looked at them as individuals before, but my heart started to break when I would see their terror and suffering. Suddenly I saw them as birds, not products!” - Jennifer Barrett, Free From Harm

The Barretts made the decision to stop breeding and selling cows and chickens and ended their production contracts. Similarly to how the Wildes had help transitioning out of animal farming from Vegan Organic Network, the Barrets were introduced to Rancher Advocacy Program. Based in the United States, it’s an initiative of Rowdy Girl Sanctuary that encourages farms to transition out of animal agriculture. They bring a variety of experts and resources to the (vegan) table to help make transitions happen. They also create a network of relationships for buyers, end users, and companies all within the plant-based sector. They help form partnerships with the goal being to end and all forms of animal agriculture and ultimately, end animal exploitation.

The Barretts are now vegan and focus on mushroom farming. Their retired cows (now considered a part of their loving family) graze at their leisure in a sanctuary setting and will never be sent to slaughter. To learn more about the Barrett’s inspiring journey from poultry to plants, Mercy For Animals created an informative YouTube video about their decision to live a vegan lifestyle.

If you know a farmer looking to transition out of animal agriculture let them know about Vegan Organic Network and Rancher Advocacy Program, because change is possible.