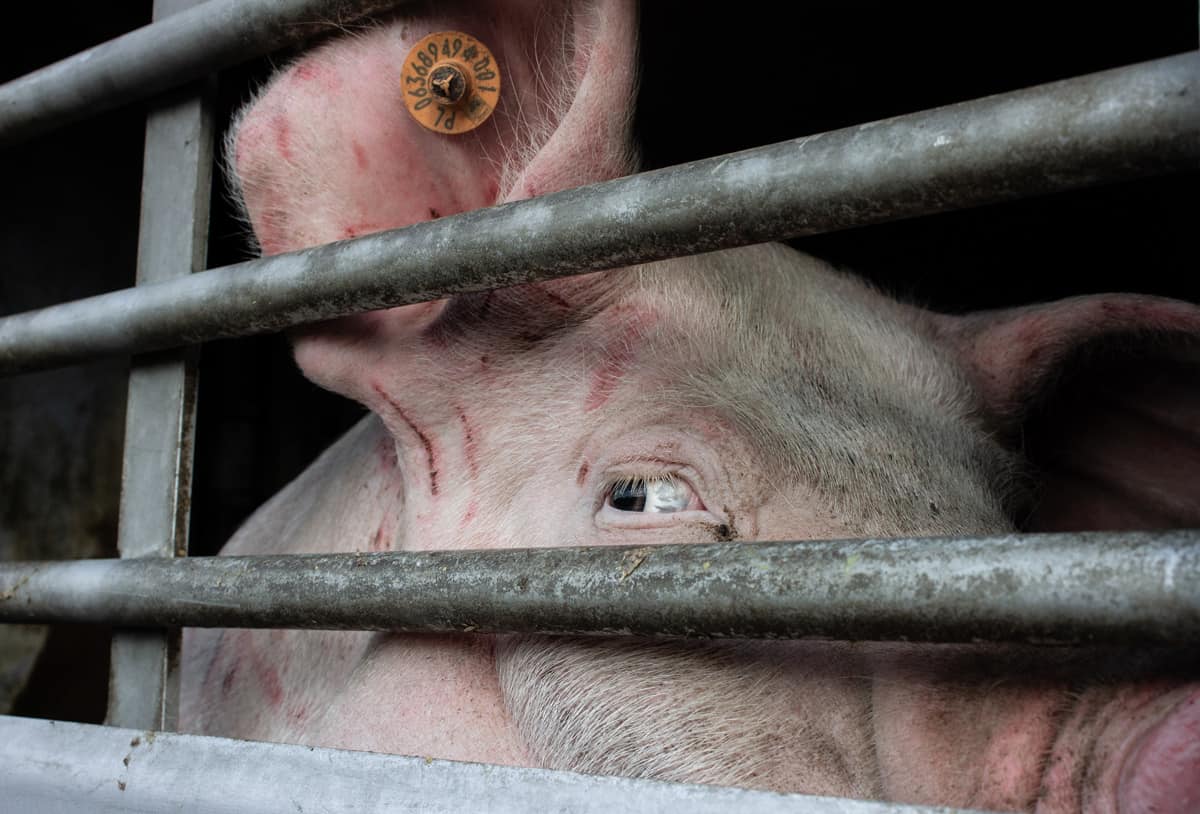 There are endless reasons to stop eating pigs. Here are five crucial ones to get you started.

Pigs have feelings. They feel sadness, pain, happiness and love. They are also highly intelligent and smarter than many toddlers. In fact, pigs have outperformed three-year-old human children on cognition tests and are able to perform several sophisticated activities such as turning on lights or heat in a barn. Research has also shown pigs are quite talented on computers and video games, so keep your PlayStation handy the next time you invite a pig over. Some experts even consider pigs more trainable than cats or dogs. So if you wouldn’t kill and serve your dog for dinner, why pay to have a pig killed to end up on your plate? It has been proven time and again that pigs are loyal, social and affectionate companions, yet humans continue to exploit and abuse them. Western countries are often outraged that some people in Asia eat dogs, but the only difference between eating a dog or a pig is your perception and what society has deemed acceptable. Like all animals, pigs are living, breathing creatures that want to live and be free of suffering. Yet on factory farms pigs are not even perceived as actual beings but rather production units on an assembly line. If given the opportunity no pig would ever choose life on a factory farm, they would choose to be loved and treated with respect and kindness. If you have never cuddled or played with a pig it’s time you arranged a visit to a happy sanctuary with rescued pigs so you can see for yourself how lovable they are.

2. The Journey to Slaughter is Brutal

Every single day endless numbers of pigs are transported by truck to the slaughterhouse. This journey happens in all weather conditions including extreme heat and biting cold. While bearing witness in Toronto to the pigs on the way to slaughter many activists have witnessed pigs with frostbite and shaking in winter and panting from heat stroke in summer. Many pigs die of heat exhaustion before even reaching the destinations. The transport trucks cram as many terrified pigs as possible inside and they have no choice but to stand up in their own excrement and vomit. The pigs are not given any food or water and often these trips along the highway are hundreds of miles from farm to slaughterhouse. Pigs may get their first sliver of sunshine through the cracks of the metal truck after spending their entire lives in artificially illuminated factory farms. While in transport, the pigs inhale ammonia fumes and diesel exhaust while trying to breath fresh air through the slats. Furthermore, the transport trucks of terror have been known to flip over and pigs are thrown all over the road to die. This has happened in Canada, the United States, Argentina, Spain, Thailand, the United Kingdom and around the world. There was a brutal accident near Toronto in 2016 involving 180 pigs. The pigs that survived the crash were then marched to the nearby slaughterhouse on foot to Fearmans Pork Inc. Animal activists looked on in horror and begged the slaughterhouse workers to release some of the pigs to a sanctuary that had offered to take in the survivors. Not a single pig was allowed to walk free.

There is no humane way to kill a pig that wants to live. Once at the slaughterhouse the pigs are gassed to death, electrocuted or dumped into scalding hot water while still alive. It is impossible for their death to be painless as the sheer number of pigs killed hourly is staggering and over 1000. An undercover investigation video from Mercy For Animals reveals pigs being tortured before their untimely death. Various forms of torture at the slaughterhouse include pigs being roughly grabbed by their ears, cutting off their tails, and inserting sharp meal spikes into their flesh. Pigs witness how their peers are being tortured and killed right before their eyes and they know they will be next. People for the Ethical Treatment of Animals published an article exposing the violations that happen at processing plants.

“The U.S. Department of Agriculture (USDA) documented 14 humane-slaughter violations at one processing plant, where inspectors found hogs who “were walking and squealing after being stunned [with a stun gun] as many as four times.”

According to one slaughterhouse worker, “There’s no way these animals can bleed out in the few minutes it takes to get up the ramp. By the time they hit the scalding tank, they’re still fully conscious and squealing. Happens all the time.””

Animal agriculture is a leading form of climate change and results in greenhouse gas emissions. If we want to protect waterways, wildlife habitats and land the best thing we can do is stop eating animals. Pig farms produce massive amounts of fecal waste that is spilling into rivers and killing millions of fish, such as what happened in a North Carolina river. People living in close proximity of pig farms risk breathing heavily polluted air. Did you know that it is common among factory farms to store untreated pig urine and feces in cesspools that are turned into liquid waste and sprayed into the air? North Carolina residents have explained the odor in the air makes your eyes burn and nose run, not to mention the health risks involved in breathing this in. If you want to save the environment and reduce your carbon footprint, going vegan is the path to take. Greenhouse gas emissions would drop dramatically and the precious land currently being used for animal agriculture would be freed up. Wild land is being lost to animal agriculture on a massive level leading to wildlife extinction and dying forests. Furthermore, the land currently being used to grow crops to feed animals in the meat and dairy industry can instead be used to grow food for humans – plant-based healthy food.

Studies have shown eating processed meat causes cancer as declared by the World Health Organization back in 2015. The WHO findings were drafted by a panel of 22 experts who reviewed decades of research. According to The American Cancer Society,

“Processed meat includes hot dogs, ham, bacon, sausage, and some deli meats. It refers to meat that has been treated in some way to preserve or flavor it. Processes include salting, curing, fermenting, and smoking. Red meat includes beef, pork, lamb, and goat. Twenty-two experts from 10 countries reviewed more than 800 studies to reach their conclusions. They found that eating 50 grams of processed meat every day increased the risk of colorectal cancer by 18%. That’s the equivalent of about 4 strips of bacon or 1 hot dog. For red meat, there was evidence of increased risk of colorectal, pancreatic, and prostate cancer.” If you want to save your own health the best thing you can do is stop eating animals and animal by-products such as bacon, ham and pork. Ready to ditch eating pigs? Try adding tofu, tempeh or seitan to your favorite recipe. Meatless bacon, although processed, is now readily available at grocery stores if you want to indulge. Or for a healthier option, coconut, eggplant, shiitake mushrooms, carrots and jackfruit can be used as a tasty plant-based alternative.