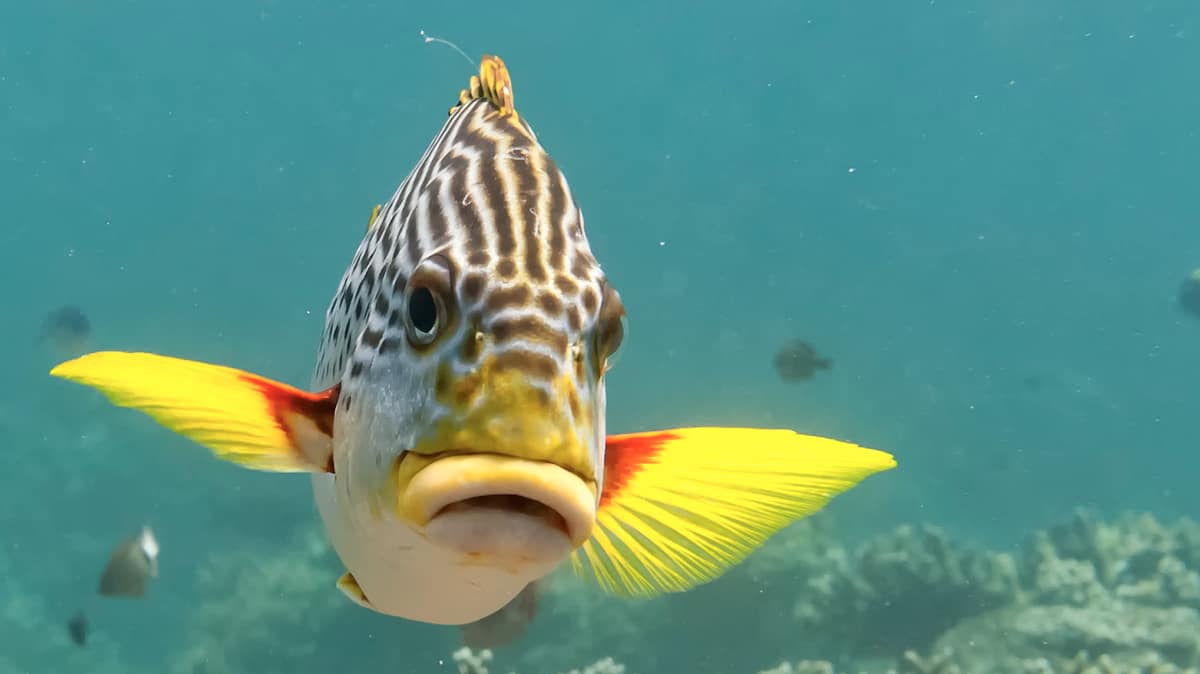 Floating cautiously near the sandy ocean floor, a small, glossy-eyed puffer fish surveys the seascape below him. In his eyes, this world is a blank canvas, and he’s ready to paint. Removing all pieces of broken shells and unwanted debris, he meticulously swims for days, carving and shaping a detailed mandala-like pattern that even the most seasoned artist may struggle to create. Standing back, it’s hard not to be in total awe of the final creation, etched into the sand against an unrelenting tide.

Nobody — myself included — would have ever guessed a fish would, or could, make art. But, much like the ocean in which they live, it seems that their abilities and complexities go far deeper than originally thought. And while we’ve all heard the old wives’ tale that fish only have a three second memory (which isn’t at all true), we’ve very likely not heard of the fish that play games, learn tricks, enjoy cuddles and make friends with their human counterparts. And that’s just the tip of the iceberg.

Diving into what feels like a forgotten world, I’ve been amazed by the discoveries I’ve made about fish, their lives, and how we’ve overlooked such an incredible species for so long. Here are just a small selection of the amazing stories and individuals so far…

The fish that loves to be cuddled

Not all animals want to hang out with us humans, and that’s fine. But this little guy can’t get enough, twirling around his carer’s hand, enjoying belly rubs and excitedly flapping his fins as he receives one of many delightful snoot boops. Too cute.

The fish that plays fetch with their human friend

Dogs may be the experts when it comes to fetch, but this little cutie will give any canine a run for their money with their amazing underwater fetch skills.

The fish that made friends with humans

Scuba diver Hiroyuki Arakawa met Yoriko the fish over 30 years ago, and they’ve been friends ever since. The unlikely duo have helped each other greatly over the years, with Hiroyuki bringing her snacks when she was unwell, and her keeping Hiroyuki amused with her friendly and gentle presence.

The fish that started a 10-year friendship

It’s official: Nemo has been found! At least he was in this case, when scuba diver Marino spotted a tiny clown fish on one of his routine dives. Marino visits Nemo on every dive, and they hang out together, playing games and chilling. Marino says that Nemo has completely changed his outlook on life, the ocean and the environment. Pretty good activism for a tiny fish!

There’s more to fish than we ever thought possible

If that’s not enough, there’s so many fascinating facts about fish that nobody would expect. For example, some fish actually talk to each other using a variety of chirps, grunts and pop-like noises by vibrating their swim bladders. Different species have different abilities and ways of communicating, with some completely silent while others far more talkative and chatty1.

Fish are also experts at communicating using body language; indicating threats, direction, or a warning sign using gesture and motion. This level of communication can be seen when witnessing shoals of fish moving as one mesmerizing orb, and it helps fish work together to avoid being eaten by predators in the ocean. They also have the ability to communicate by bioluminescence (think: glow in the dark), electrical pulses and even releasing chemicals which can be sensed by other fish using smell or taste.

Incredibly, it has also been discovered that some fish have collectively been chatting to each other for up to three hours using a series of croaks and purrs2. What we presumed were silent, desolate oceans are in fact teeming with the choruses of talkative schools of fish.

Next of fin: Fish recognise their friends and family

Fish are able to recognise other members of their own species, allowing them to form social groups and work together to avoid predators. Amazingly, they also recognise family members, with some studies demonstrating that they will favour their kin over strangers3.  Studies have even demonstrated that fish are able to recognise their beloved family members by the way they swim and move, or by a unique smell — I’m sure some of us can relate to that one!

As seen in some of the above video clips, fish also have the ability to learn fairly complex behaviours — far from the ‘three second memory myth’ — and have been noted to have brain structures similar to that of mammals4. In fact, after years of research into fish and their behaviour, biologist Culum Brown concluded that fish are “not any less intelligent or sophisticated than [land based] animals”, and suggestions that fish lacking intelligence are simply “a total myth”.5 He goes on to elaborate that fish are able to recognise other fish that they’ve previously spent time with, learn not to re-enter traps, have a known place within hierarchies and are able to remember complicated spatial maps of their surroundings. Brown even found that some species of fish used tools; a type of behaviour usually exclusive to a select few mammals such as dolphins, chimpanzees and of course humans6.

Fish are as complex and sensitive as any land animal

And, despite the horrific way they are treated at the hands of industrial fishing, fish do in fact feel pain and fear, raising a lot of questions for every industry that uses and abuses them on a daily basis. After a 2015 review of current knowledge on fish intelligence, sentience and consciousness, researcher Culum Brown found that there was ample evidence to support the notion that fish have both intelligence and pain perception, concluding that they should be offered the same protections as any other vertebrate7. Given fish are hauled onto industrial boat decks in their billions before being suffocated to death, this peer-reviewed revelation is simply horrific; fish may well be one of the most abused animals on the planet.

Fish are complex, sensitive animals with a range of abilities, many of which we don’t yet know. While we’re seeing a steady increase in the amount of research and awareness surrounding these amazing creatures, we’ve still got a long way to go before we truly know and understand just how incredibly complex and astonishing they are. In the meantime, there’s a few things we know for certain: fish are sentient, intelligent, fully-feeling animals who deserve so, so much better.