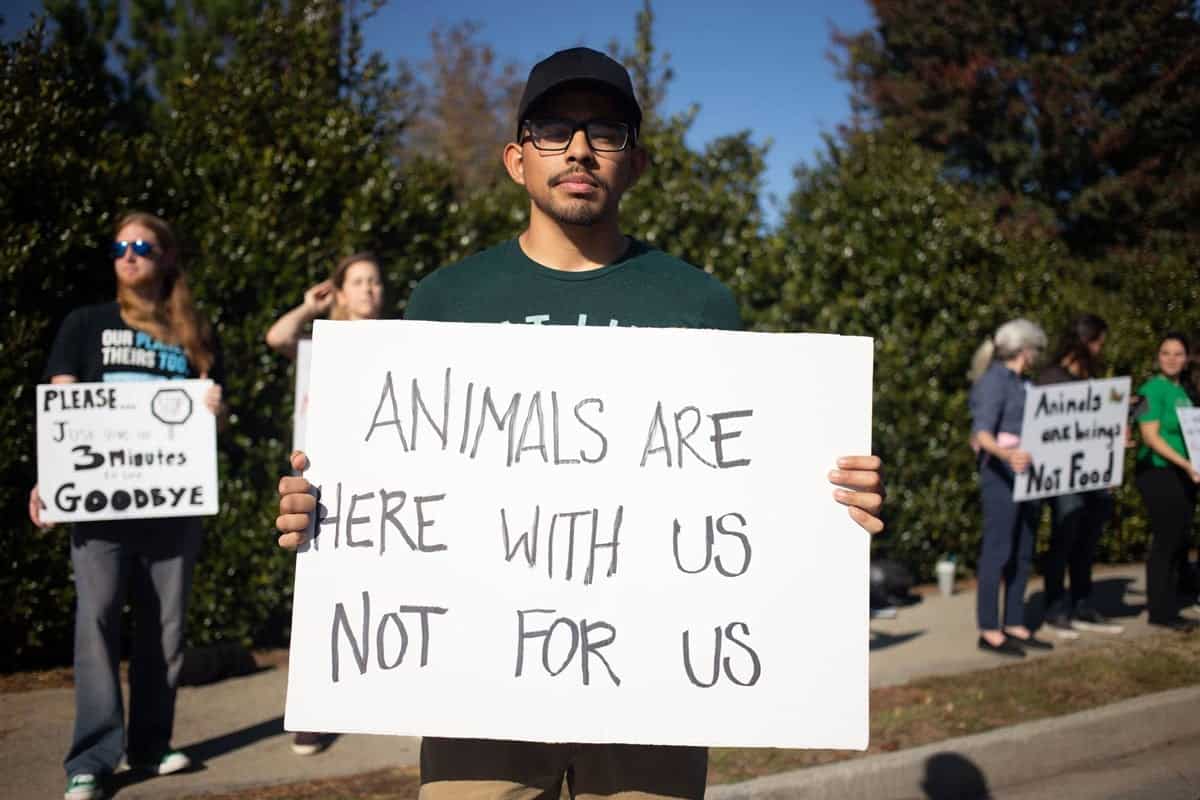 Leo Tolstoy defined the moral duty to bear witness as: “When the suffering of another creature causes you to feel pain… come closer, as close as you can to him who suffers, and try to help him.” Atlanta Animal Save describe the importance of bearing witness for both vegans and non-vegans, and how they are using Save Squares to open hearts and minds by revealing the horrors and secrecy of the slaughterhouse to their local community.

Animal Save Movement is on a mission to hold animal vigils at every slaughterhouse on the planet and bear witness to every exploited animal. Could you explain why it is so important to bear witness, and how this can result in lasting change?

We think it is extremely important to bear witness because we see face to face the individuals we are fighting for each and every day. Capturing the individuals' last moments before entering the slaughterhouse helps encapsulate the sadness, the horrors, and the abuse these poor beings go through every day of their lives. Bearing witness is difficult, even more so for those of us who are extremely sensitive to seeing animals suffering. However, we think it’s extremely important to capture videos and images and share them on our social media channels to help non-vegans make the connection between the “food” they consume and the animals which had to die and suffer for that piece of flesh to be on their plate. It is also important for other activists to see other activists being at vigils and bearing witness. It encourages others to do more and be better. We know it does that for us. Atlanta Animal Save was one of the first chapters to use “Save Squares” in their activism. What does that involve?

A Save Square is an activism event which revolves around showing footage of animal abuse and holding the public accountable for their day to day actions which may hurt animals. We do this via the Socratic method, which is a line of questions that help non-vegans reach their own vegan conclusion at the end. Activists hold screens or signs (the signs may say things like “come to see why were here” or “find out how you can help animals today”) while wearing blind folds. We also hand out small cards which contain fantastic information that can help the public do their own investigation about veganism and how it can not only save animals, but help the planet as well, if done correctly, a plant based diet can also help people THRIVE and that is just a triple win win. We hand cards out when we have successful conversations with the public or when they ask us for additional information. Most of the time Save Squares are held in public spaces where there is a lot of foot traffic the responses are usually very positive. Not always, but often. People have walked away thinking very deeply about animal rights and how they can take action in reducing the non stop suffering animals go through. This is easily one of our favorite forms of activism.

Why are photographs and videos such a powerful tool and how are they being used to drive activism forward?

Videos and pictures are powerful because they are able to capture emotions, moments and they tell a story. The animals’ stories and the activists’ stories. This helps inspire vegans to become activists and it inspires non-vegans to go vegan. Social media propels all of this by allowing hundreds of thousands of people to see what the animals go through and what activists are doing about it. It takes ONE video or picture sometimes to change someone’s perspective about animal rights and veganism.

Christopher Eubanks (co-organizer of AAS) and professional wedding photographer River West (local activist) have always been the ones capturing powerful professional imagery at our vigils. Christopher has also held photography training for activists that are interested in advancing their skills, and that will be soon available on the ASM YouTube channel.

What is the biggest barrier preventing people going vegan in your local community, how can we address that, and how can the global movement support you day to day?

We believe the biggest barrier is lack of awareness about what truly happens to non-human animals behind the closed doors of the animal agriculture industry. We believe education in the community is the way to change that. We could hold more Save Squares and another option could be to host food demonstrations to let people see how amazing vegan food can be. We’d also like to be involved in other forms of activism such as clean ups and feeding the homeless.

The funding we receive has been a blessing to our chapter as well as the online support. We appreciate that very much. Another potential way of support could be to send us more ideas of ways in which we could be active, more ideas and details on different forms of activism we could engage in.

Interview conducted with Christopher Eubanks and Luis Correal from Atlanta Animal Save:

Christoper Eubanks
Christopher Eubanks is a climate, human and animal rights activist that was raised in Atlanta, Ga and has dedicated himself to doing advocacy work that combats all forms of oppression. After learning the horrors of animal exploitation Christopher became vegan, began doing community organizing and has helped co-organize Atlanta’s first ever animal rights march. Christopher plans to use education, public speaking and creativity as tools to advocate for the climate, a vegan diet and the end of oppression for all beings.

Luis Correal
Luis Correal is a local animal rights activist and Save organizer. He works full time with PETA as an Assistant Campaigner and sells traditional Colombian vegan food at the weekends with his sister. During his off time he likes to go to the gym, learn French, and practice Brazilian Jiu-Jitsu.