Animal Save Movement is delighted to be partnering with Terraseed, a vegan supplement company, in the launch of a joint campaign calling for more transparency in labelling in the supplement industry. With so many worthwhile causes within the animal rights movement and beyond, we decided to partner on this campaign as it represents one of the most hidden aspects of animal exploitation today. The supplement industry has a tremendously damaging effect on our environment, our planet's biodiversity, the oceans, and of course the animals themselves. Astonishingly, in the United States alone, the supplement industry kills 24 billion animals every year!

The prevalence of animal-derived ingredients within supplements is likely to shock most people, vegans included, as the industry goes to great lengths to ensure that these facts are hidden from the public. Animal Save Movement and Terraseed intend to change that and put the reality at the forefront of labeling on supplement products, allowing consumers to make educated choices about the products they put into their bodies, and what they contain. Terraseed and Animal Save Movement have produced a report and launched a petition calling on the FDA to include a section on the ‘Supplement Facts Label’, which would clearly indicate if a product includes animal-derived ingredients. 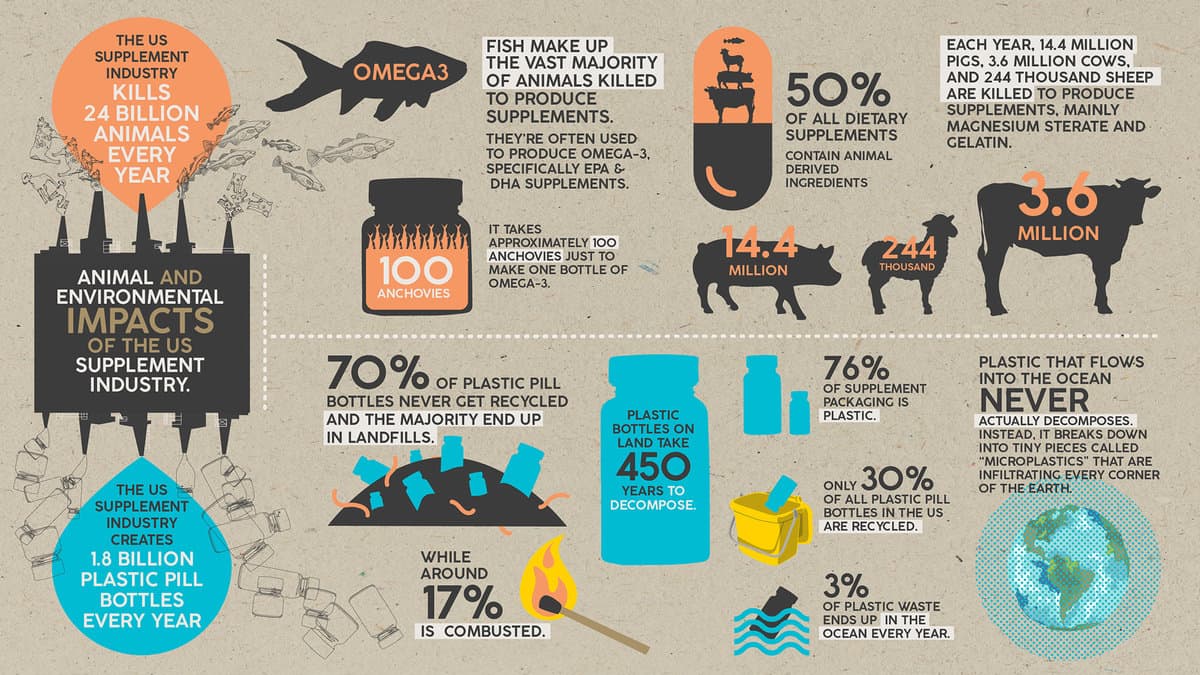 The supplement industry has grown exponentially over the last few decades. Taking supplements is now in the mainstream and a common daily routine for many people, vegans, vegetarians, and those who consume animal products alike. In fact, the industry is estimated to be worth $55 billion dollars every year. For such a major industry, very little is known about the impacts it has on the animals or the planet. Unlike with prescription and over-the-counter medications, the FDA (and the Federal Trade Commission) assumes a reactive rather than proactive role towards dietary supplements. Instead, supplement companies, manufacturers, and distributors are left to ensure that each ingredient in finished products meets the definition of a dietary ingredient.

Finding out which animals and which animal parts specifically are being sourced for use in supplements is notoriously opaque. The average consumer is presented with no information on packaging to help them understand from what or whom and how the products have been made. There are a wide variety of ingredients that may be used in supplements, but at a high level, they can be sorted into three categories: vitamins (derived from plants and animals), minerals (inorganic elements), and botanicals (plants valued for medicinal properties). Vitamins, minerals, and botanicals used in supplements can either be derived solely from natural sources or synthesized using a variety of methods that may lead to varying levels of bioavailability. While synthesized vitamins are widely used due to their lower cost, there are still a high number of common supplement ingredients that are often derived from animal byproducts.

Terraseed wanted to uncover the truth and conducted an extensive research report in partnership with Animal Save Movement, leaders in the industry, and official data from the NIH Office of Dietary Supplements. Terraseed analyzed data from over 79,000 supplement products included in the US National Institutes of Health Dietary Supplement Label Database (DSLD) to find out just how prevalent the problem is. The results were staggering! 50% of all supplements sold contain at least one animal-derived ingredient. Terraseed estimated that approximately 14.4 million pigs, 3.6 million cows and 244 thousand sheep are consumed to produce supplement ingredients each year for the US market alone. The number of fishes killed is in the billions. So animal product use in supplements is the norm, yet as mentioned above, almost completely hidden from the consumer.

The table below shows the five most common supplement ingredients that are typically derived from animals. Magnesium stearate and gelatin are made from processing animal byproducts, primarily from cows, pigs, and sheep. Vitamin D is commonly derived from lanolin in sheep's wool. Omega-3s typically come from fish oil. Bee pollen and propolis are harvested from honeybees.

Magnesium stearate is a common ingredient that is used as a binder to keep other ingredients from sticking to the machines that manufacture pills. Gelatin is commonly used in the capsules or softgels that house the other components. Both these elements are unnecessary and can be replaced with plant-derived products that serve the same purpose, yet both these ingredients contribute to the deaths of millions of cows, sheep, and pigs every single year. They are made by literally crushing the fat, bones, and tendons of these animals.

Natural vitamin D is often sourced from sheep’s wool. While the shearing itself does not kill the sheep, they are confined to a system of exploitation and abuse until they are no longer of use to the industry at which point they are killed without mercy. Instead of exploiting sheep, natural vitamin D can also be extracted from reindeer lichen or certain mushrooms grown under UV lights with no animals being tortured or killed, but overwhelmingly, the supplement industry chooses the option involving cruelty. 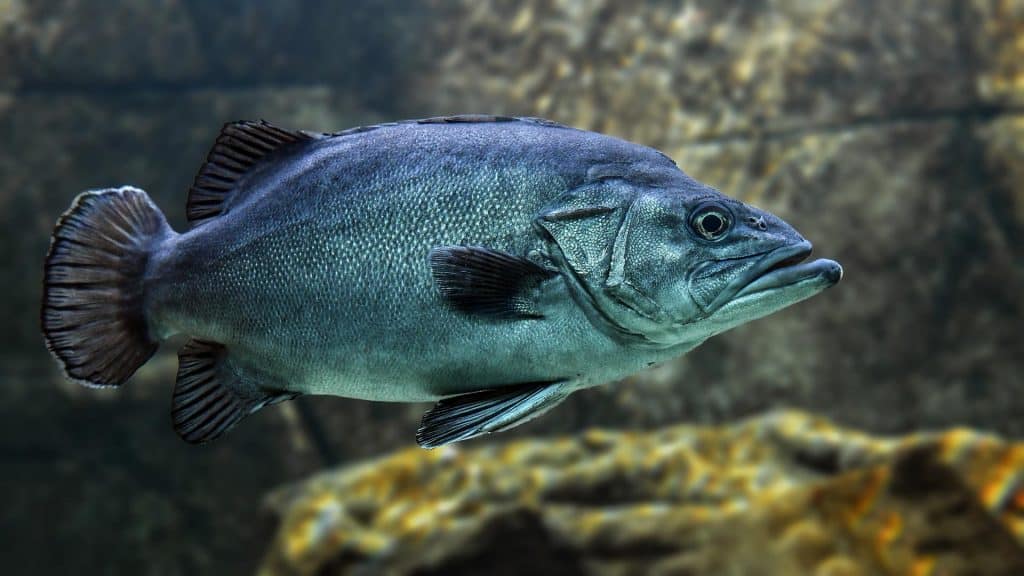 Fishes make up the vast majority of animals killed to produce supplements. In fact, so many fishes are killed each year that they are not even officially measured by numbers, instead they are measured by weight. Let that resonate for a moment. Living beings who have as much right to live as you or I, yet are killed in such vast quantities that their lives are not even quantified by number. Each year, approximately 16 million metric tons of fish are caught to produce fish oil and fish meal (the same fish will be processed to produce both products) globally. Given the average weights of the small fishes most commonly used, this equates to 540.5 billion fishes. Approximately 75-80% of globally-produced fish oil and fish meal is used as feed for aquaculture (farming of larger fishes, like salmon) and other animal feed. An estimated 13% of fish oil is actually used for human consumption, primarily fish oil supplements. Using this information, Terraseed conservatively estimated that 70.3 billion fishes globally, and 24.3 billion fishes in the US alone, are consumed in the production of supplements.

They're primarily used to produce Omega-3, specifically EPA/DHA, supplements. This practice is so common that Omega-3 supplements are often referred to as "fish oil" supplements. EPA/DHA from fish is generally harvested from small species of fish such as anchovies, capelin, and sand eels. However, larger species and other small species are also used in many cases. The industry has done such a good job at promoting “fish oil” that many consumers believe that omega-3’s and “fish oil” are synonymous. However, the Omega-3s found in algae are biochemically identical to those found in fishes and are just as potent and bioavailable. While the Omega-3s found in algae have identical properties, the methods through which they are produced and obtained are not. Algal Omega-3s are typically grown under controlled conditions and purified (a cleaner source), with no risk of exposure to toxins or environmental contaminants. Straight from the source, algal Omega-3s are inherently more sustainable and ethical. They don’t require billions of sentient beings to be killed for their production. 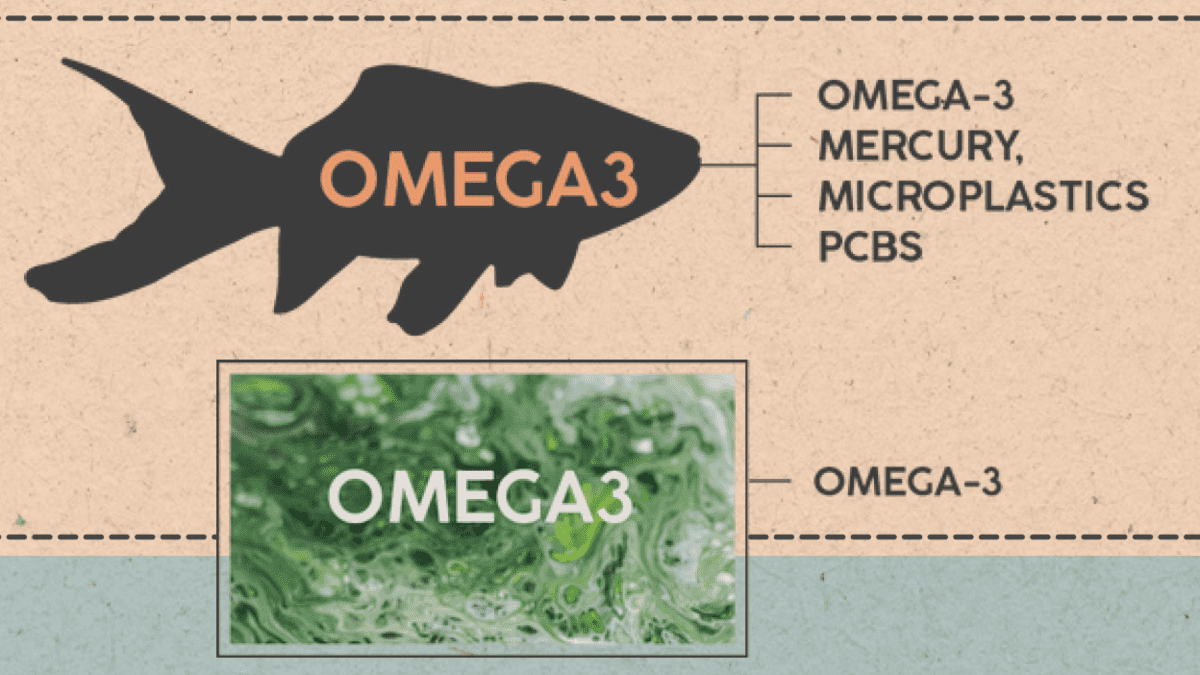 It's time to act

It doesn't have to be this way. As Terraseed has shown, vegan supplements are a readily available option for consumers. However, for consumers to be able to make rational, educated, and discerning choices, they need to know what is in the products they are buying. It is time for transparency on labels. Animal-free supplements create less pollution and more consumer demand. A small label is all the public needs to make informed decisions for themselves and their planet.

Under the Dietary Supplement Health and Education Act of 1994 (DSHEA):
Manufacturers and distributors of dietary supplements and dietary ingredients are prohibited from marketing products that are misbranded or misleading. However, the supplement industry has traditionally lacked transparency about ingredients and how they are sourced. People deserve to know what is in their supplements, where ingredients are sourced from,  the level of animal suffering that is involved, what the supplement practices are in relation to plastic, and the overall impact on the environment and the animals. We believe consumers would make more ethical choices if they could, but supplement companies are hiding ingredients, not being transparent, and prioritizing profits over consumer awareness.

The FDA must act

The FDA has the authority to take action against any misleading dietary supplement product after it reaches the market. Our new petition calls on the FDA to include a section on the ‘Supplement Facts Label’, which would clearly indicate if a product includes animal-derived ingredients. Consumers are conscious about animal suffering and environmental pollution – transparency in labeling is the only way people can shop confidently without compromising their values. If brands have nothing to hide, there should be no reason for them to oppose more transparent labels on their products - let’s change this now!