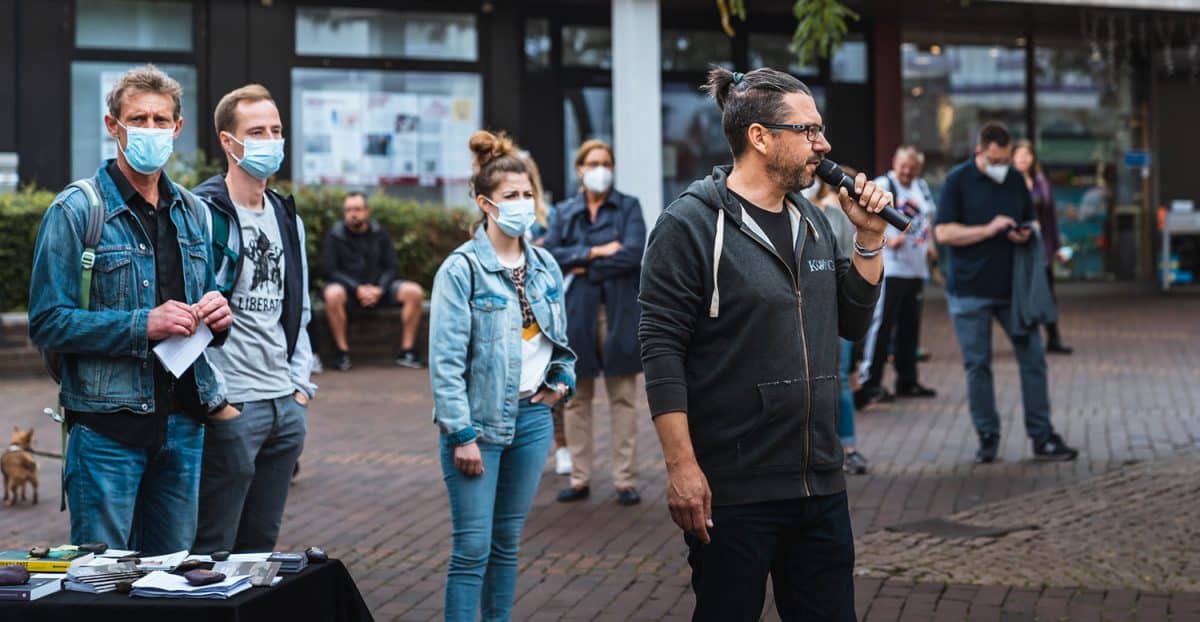 Can you tell us about your journey to Veganism?
I was 18 when a schoolmate and good friend asked me if I had ever considered “who” I was eating every day. I hadn’t ever thought about my salami sandwich as “who” but I instantly realized that it had been an individual that was killed in order to become a salami. My friend gave me a flyer with a picture of a slaughtered pig. I decided to become a vegetarian at that moment. The next day, I proudly presented my cheese sandwich… but my friend informed me about the dairy industry and said it was even worse than meat. So I was vegetarian for just one day and became vegan the following day.
This was 30 years ago at a time when soy milk tasted like dirty water and tofu sausages like car tires.

When did you start getting active?
In early 2018 a friend wanted to start an AV chapter and I spontaneously attended the first-ever cube of truth in our city. When I arrived the cube was already standing and I was asked to do outreach right away, without even knowing what that was or what to say. But my very first outreach conversation was with a woman, who was crying at the sight of macerated chicks and swearing she would never ever again eat eggs. That moment felt so great because I changed a little part of the world for the better. And I wanted to change a lot more.

What kind of actions do you take with Dortmund Climate Save?
We did weekly Climate Save Squares in the streets before the lockdowns. Similar to the Cube of truth concept we presented video footage on TV screens, but with footage of burning forests, extreme weather and animated graphics concerning aspects of the climate and environmental crisis. To reach a more open audience we also tried to be active at special places - like at climate strikes or environmental fairs - and were able to raise our effectiveness.


Last year was the 50th anniversary of the biggest slaughterhouse here in the region and we cooperated with Bielefeld Animal Save to organize a 50 hour vigil including camp, film screening, live music, art performances etc.

What have been the biggest challenges you have faced in activism?
The lockdowns and the loss of momentum were/are a big problem. A lot of activists fell inactive as they were afraid to talk to people due to the infection risk. At the moment we are much less active and are struggling to get enough people to our demonstrations.

A message you would like to send to new activists who are just starting out
If you want to help to make sure our children will be able to survive on earth - Now is the time! We are on the brink of imminent climate and environmental breakdown. Tipping points in the climate system are only a few years away. Nothing is more important than steering humanity into a sustainable future, fast. In my humble opinion, it makes no sense to work or study for a career and a “happy future playing in the garden with the grandchildren,” because if we do so this future will not happen. There are only two options left: Prepare for the worst or help prevent it - no matter the odds. I prefer to do something about it instead of waiting for the end, because I have children and I have the responsibility to stop the destruction of their homeworld.

Talking to people on the streets I often use the following picture: “What do you want to tell your children on your deathbed? Do you want to say - and I hold my hands like I’d hold the world in it: ‘This planet is your heritage. We had a big party - we burned a lot down, killed nearly everything, wrapped it all in plastic and left the heating on - I don’t know how you can survive in this mess, but I don’t care because we had a lot of fun and it was sooo tasty. Bye.’ Or would you prefer to say: ‘This planet is your heritage. We destroyed a lot, but one day we realized that was wrong and stopped. We started to repair as much as was possible for you to be able to survive here. I hope it’s enough. Please forgive me?'