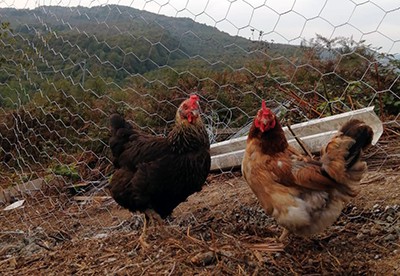 with Regan The Chicken & Istanbul Animal Save.

Animal vigils can have life changing consequences, not only for those who bear witness but for the animal victims and wider community around us. When three activists from Istanbul Animal Save decided to organize a chicken vigil at a farm in Şile, they could never have predicted the profound impact their presence would have on one curious farm worker named Erol.

The activists found the farm behind a parking lot; like many farms and slaughterhouses in our communities it sits in plain sight, unnoticed by vast swathes of the public. It exploits chickens for both their eggs and flesh and is part of the systemic cycle of violence and oppression present in the animal agriculture industry.

The group coordinator Doğa recalls the first ever chicken vigil at the farm, “A worker named Erol came out to speak with us. We greeted him with an open heart and open mind and used the opportunity to have a long talk with him about why we were bearing witness.”

For Erol, it was the first time he had heard of veganism, he admitted to the group that if the chickens had a choice, they would not want to be held captive at the farm. He explained how he tries to keep his emotions separate from the tasks issued by his boss because he feels uncomfortable about his job.

The activists gently asked Erol a line of questions to help him see things from the perspective of a chicken, encouraging him to think about their unique personalities, as well as the torment and pain they endure at the hands of humans, “He said we were doing something very special and asked us to visit again in the future.”

As the chicken vigil drew to a close, the group offered Erol their contact details, “We thanked him for talking to us and listening from the heart. We told him to reach out if he would be happy to free someone from the farm. We didn’t expect to hear from him of course, but a seed of change was planted.”

Then one day out of the blue, the phone rang. On the end of the phone was Erol, it seemed that the chicken vigil had struck a nerve, “Erol had been thinking long and hard. He couldn’t and didn’t want to kill anyone else and was even thinking about going vegan.” Erol then invited the activists to return to the farm to talk more, “He told us there was a sick chicken due to be slaughtered in two days and he wanted to save her. We couldn’t believe what we were hearing!”

The situation was dire, the owner of the farm had decided the chicken should be killed but the activists were over three hours away tied up with a construction project at Pati-Ka animal Sanctuary in Zonguldak. Doğa said, “It was desperate, but we did have hope. Erol vowed to do anything he could to keep the chicken safe, and urged us to hurry so that no one would notice.” There was not a moment to spare and it was a race against time for Istanbul Animal Save and Erol to launch their rescue mission.

The group’s efforts paid off and Regan the chicken was spirited away to freedom and into the loving arms of her rescuers. The choice of name was an easy one, “We named her Regan to honour the memory of Regan Russell who was killed by a slaughterhouse truck during an animal vigil held by Toronto Pig Save on June 19th 2020.”

Regan the sweet-natured chicken received veterinary treatment before she was taken to the safety of a sanctuary where she will live the rest of her life free from slavery and oppression. It didn’t take her long to settle into her new home, “Regan is so friendly and after just a few days she started to get excited to meet other residents at the sanctuary. She loves taking a nap with a lullaby and wandering around with her new bird family.” In another beautiful twist to the tale, Regan was introduced to Mertcan the rooster, “It was love at first sight. Now they do everything together, they are sharing a beautiful life.” It looks like it is happily ever after for Regan, but what of Erol? Well, the story doesn’t end there. Doğa called him once Regan was safely settled, “I thanked him for risking his job to save Regan’s life and explained how happy we were that he was starting to realise that animals' lives do matter and what happens to them is wrong. He has now invited us for a cup of tea to discuss veganism.”

This was the first time that Istanbul Animal Save activists were able to save an animal from a vigil. They believe their love-based sincere approach is what saved Regan’s life, “We helped Erol understand that we weren’t against him, just the actions that harmed animals. He felt able to reach out to us as he knew he needed to change. He trusted us because he knew our aim was to do good and not to harm him.”

Regan’s life was mapped out before she was born, but the presence of Istanbul Animal Save changed her destiny. The activists were there to witness her suffering and were able to reach out and help, “We had the privilege to save a life. This happened because someone who we'd never think could change, actually did.”

The grim reality is there are billions more animals like Regan who urgently need us to take action and intervene, so what next for the group? “We'll keep holding vigils and do whatever we can to help people change like this farmer did and save more animals.”

If you would like to bear witness and save lives, join your local Animal Save Chapter today.

Special thanks to Doğa Giray, Istanbul Animal Save Group Coordinator and Country Liaison for Turkey.

* Erol’s name has been changed to protect his identity.