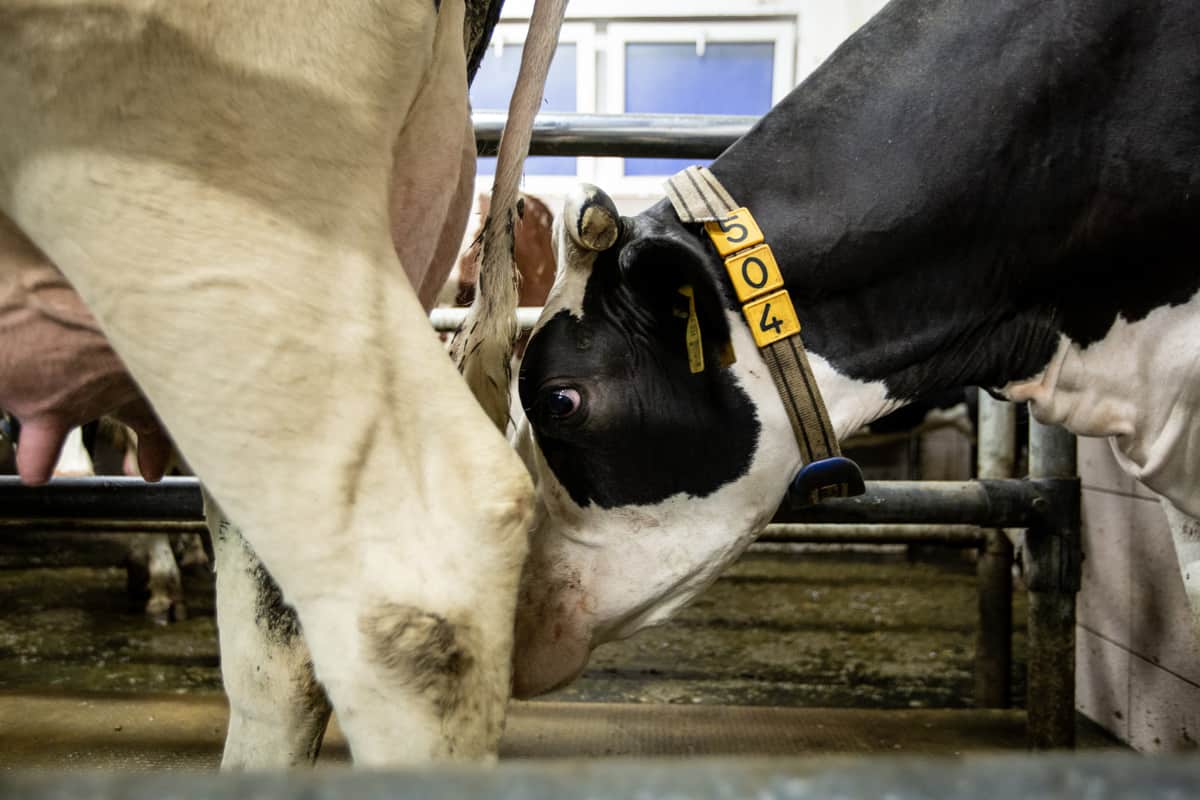 Cows, like all animals, want to be free. They want to roam at their leisure, be free of pain, feel the grass beneath their feet and not be locked in captivity. Cows nurture their young and form friendships with other cows that last a lifetime. But the horrific dairy industry takes all this away from them. Cows suffer terribly on dairy farms from the moment they are forcefully inseminated; deal with the heartbreak of having their babies stolen from them; are hooked up to painful milking machines; stand all day on abrasive concrete floors; are shipped in transport trucks when they can no longer produce milk; and eventually die a violent death at the slaughterhouse. But it doesn’t have to be this way. You have the power to make a choice every time you go to the grocery store or eat at a restaurant. There are so many healthy plant-based dairy alternatives and you are guaranteed to find something you will love. The power is yours next time you choose a meal. 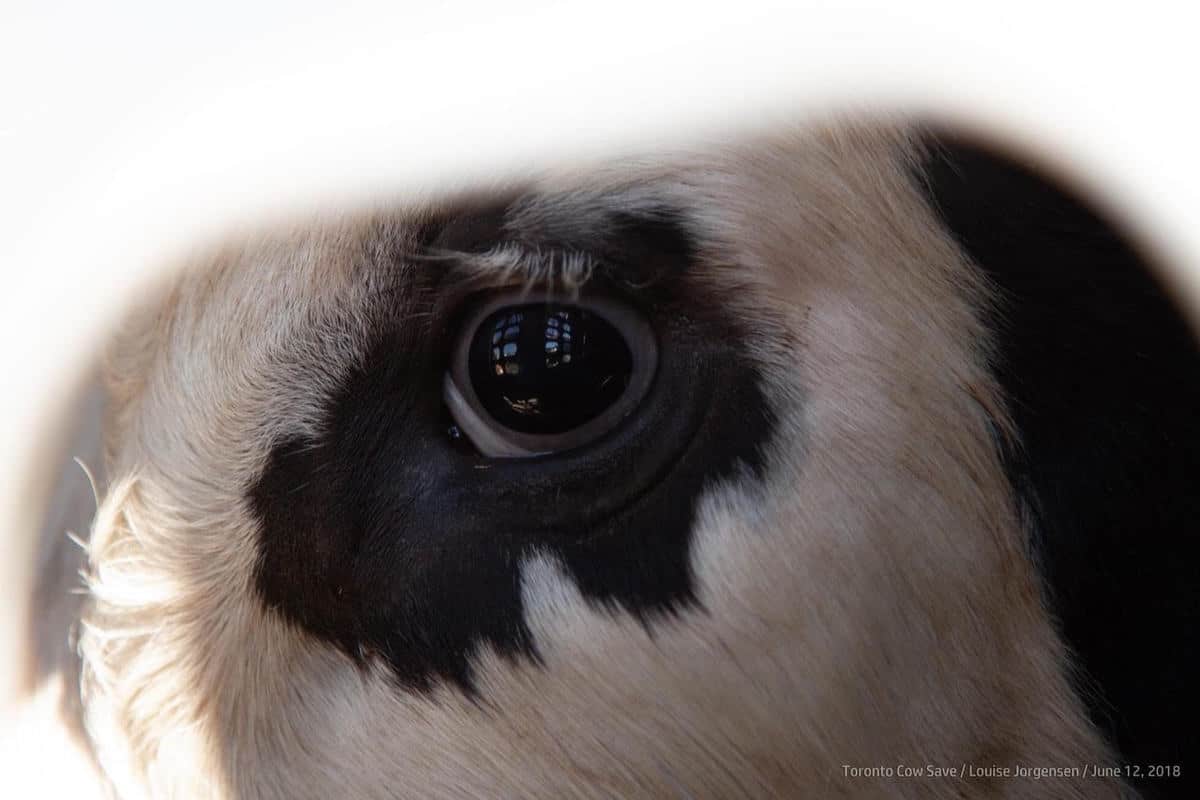 Dairy cows do not choose to become pregnant. They are forcefully inseminated against their will and the dairy industry uses terminology that is related to sexual assault that I will not mention for those triggered by these phrases, but you can read about it here. According to People For The Ethical Treatment of Animals (PETA), almost 75 percent of animal agriculture methods use artificial insemination to get their animals pregnant. This may lead to infection, disease and injuries, not to mention having their bodies violated. Female cows (and pigs and turkeys too) are routinely exploited and forced to breed to keep the factory farming industry going.

2. Male calves are killed as babies

If exploiting female animals and their reproductive systems wasn’t bad enough, the babies are stolen from their mothers very shortly after they are born, some as early as one day old. This inhumane act of separating calves from their mothers happens on organic dairy farms too, so don’t be fooled by the terminology, this is not limited to factory farms. The mother cows have been known to bellow for hours or days in mourning and pace in their tiny cages searching for their babies. Of course the milk a mother cow makes is intended for her babies, not humans. The female babies that are born are often kept alive to produce milk themselves one day and the male calves are either shot at birth or chained up in tiny stalls and raised for veal. These confined babies are fed a milk substitute intended to have them gain two to three pounds per day. Without the dairy industry the veal industry would not exist, so by drinking milk and eating dairy products like cheese and ice cream you are in turn subsidizing the veal industry. Not to mention we are the only species that drinks the milk of another. But it doesn’t have to be this way. 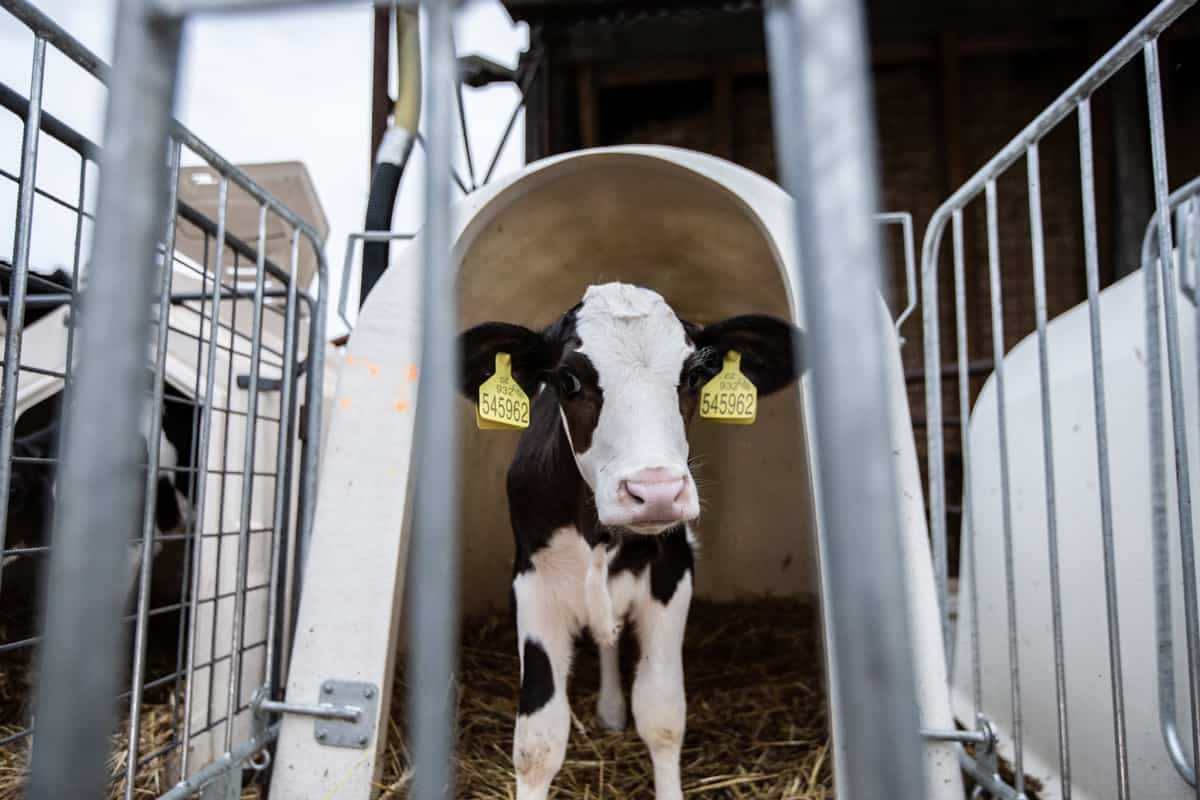 3. Cows have much shorter lifespans in captivity

Like all animals that are kept in captivity, a cow's life span is drastically shortened when confined to factory farms. A cow's natural lifespan is 18 – 22 years, but the dairy industry typically kills them at age five or six because they become “spent”. By the time they reach that age their bodies are worn out from constantly being pregnant and lactating. It is common for them to become lame from standing on dirty abrasive concrete floors their entire lives connected to a milking apparatus. Investigations have discovered that many of these cows are so sick and injured, that by this time they can’t even walk or stand. The industry calls them “downers”. They are helplessly prodded and dragged off to the transport trucks to be killed at the slaughterhouse and used for ground beef, cheap hamburgers at fast food chains or dog and cat food. 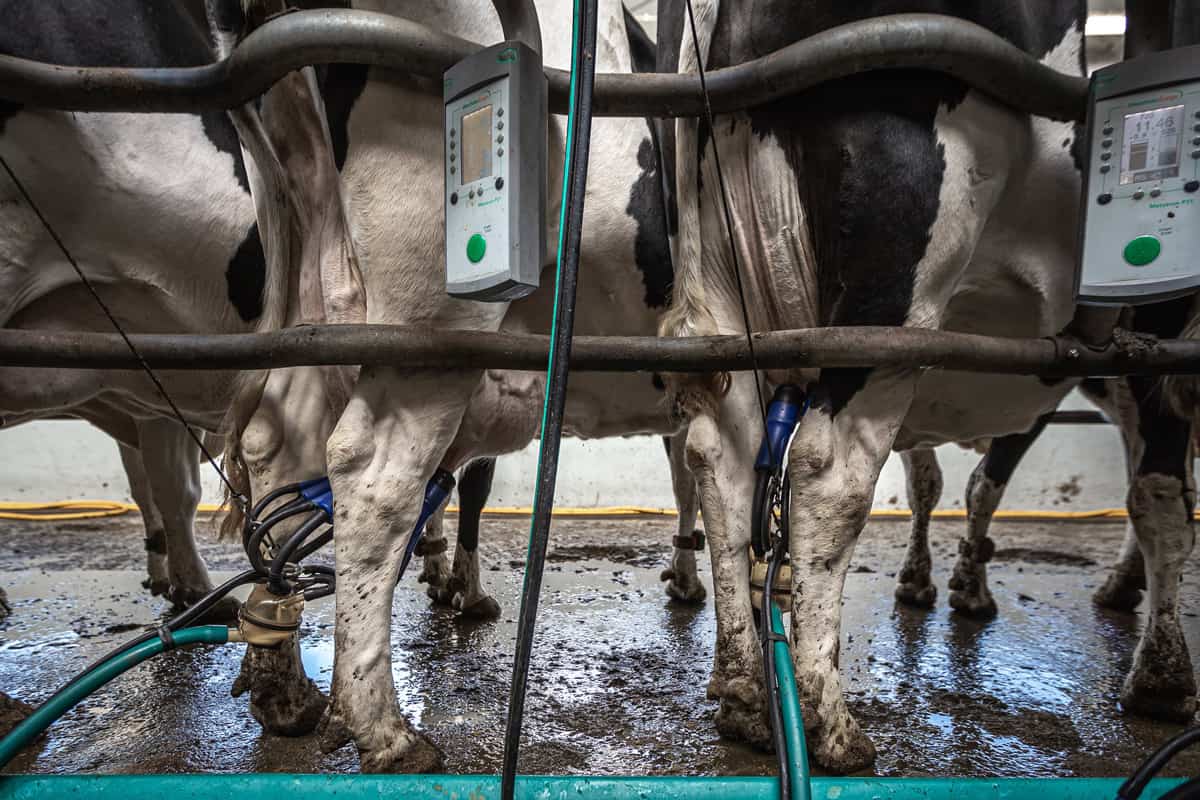 4. The road to slaughter is violent

Cows headed to slaughter are crammed together in harsh metal transport trucks. The trucks don’t stop for the extreme summer heat or the freezing Canadian winters and the cows suffer the entire route. They are terrified and are often standing in their own excrement. Louise Jorgensen, the organizer for Toronto Cow Save and a passionate vegan activist, bears witness to dairy cows heading to slaughter after they are of no use to the farmers anymore. She explains,

“We regularly witness transport trucks filled with cows discarded by the dairy industry, whose milk production has declined, arrive at the slaughterhouse. Many arrive in different stages of pregnancy and with painfully engorged udders still dripping milk. It’s painful to witness the fear and confusion in the eyes of these gentle mothers and to hear their long, low bellows for help. To know we have no power to stop the violent fate that awaits them. We witness their skins, heads, and unborn calves in blood filled trucks and dumpsters at the opposite end of the slaughterhouse.” 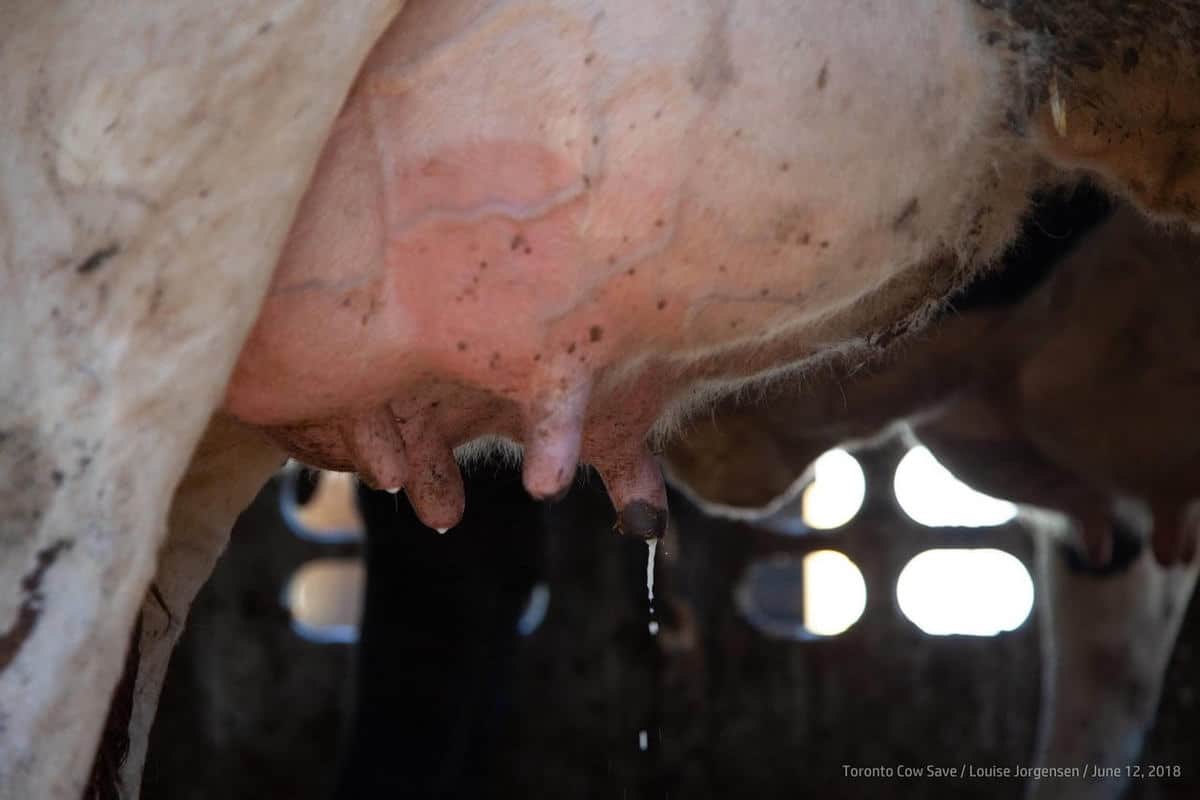 If you care about the environment don’t support the dairy industry. Dairy farms have a huge damaging effect on the earth. Cows on dairy farms produce an enormous amount of manure daily that ends up in drinking water and waterways and is a huge cause of polluted lakes and rivers. The manure from these dairy cows produces greenhouse gas emissions that contribute to climate change and the destruction of our beautiful earth. In a recent article published in The Guardian you can read all about how emissions from 13 dairy farms match those of the entire UK. Meanwhile in California, studies conducted years ago suggest that the gas from dairy cows produces more harmful gasses, smog and pollution than that of a car.

6. Milk is filled with blood, pus and hormones

Blood in cow’s milk is a common occurrence and something the dairy industry tries to hide. They also don’t advertise mastitis on their milk cartons because they want to keep selling their product. Mastitis is a painful udder inflammation of the mammary glands and leads to pus in milk as the cow’s body tries to fight the infection. This happens frequently and all dairy milk contains pus. Furthermore, in the United States standard dairy cows are medicated with a recombinant bovine growth hormone (rBGH) to stimulate a higher than normal milk production, as explained by the American Cancer Society. This synthetic growth hormone was approved by the Food and Drug Administration (FDA) in 1993 and can cause diverse health effects in cows and antibiotics are then used to treat them. The US-Mexico-Canada agreement allows milk from the US to be sold in the Canadian market.

To learn more about the health concerns surrounding dairy, check out Physician’s Committee for Responsible Medicine.

7. Healthy and humane alternatives are everywhere!

Ready to ditch dairy? These days you don’t need to look very far to find healthy plant-based alternatives to dairy products. Delicious and cruelty-free plant-based milks include soy, almond, coconut, hemp, rice, cashew, pea and even creamy oat milk. Got that cheesy craving? No problem! Plant-based vegan cheeses now line the shelves at grocery stores and come in savoury blocks, shreds, slices, spreads and wheels. There are even multiple kinds of vegan cheesecake! Desire an ice cream cone on a hot summer day? Look no further than your local freezer section in most grocery and health foods stores. Most mainstream restaurants have dairy (and meat!) free options on their menus, coffee shops offer plant-based milks, and pizza parlours will gladly vegan-ize your delicious cruelty-free pizza.