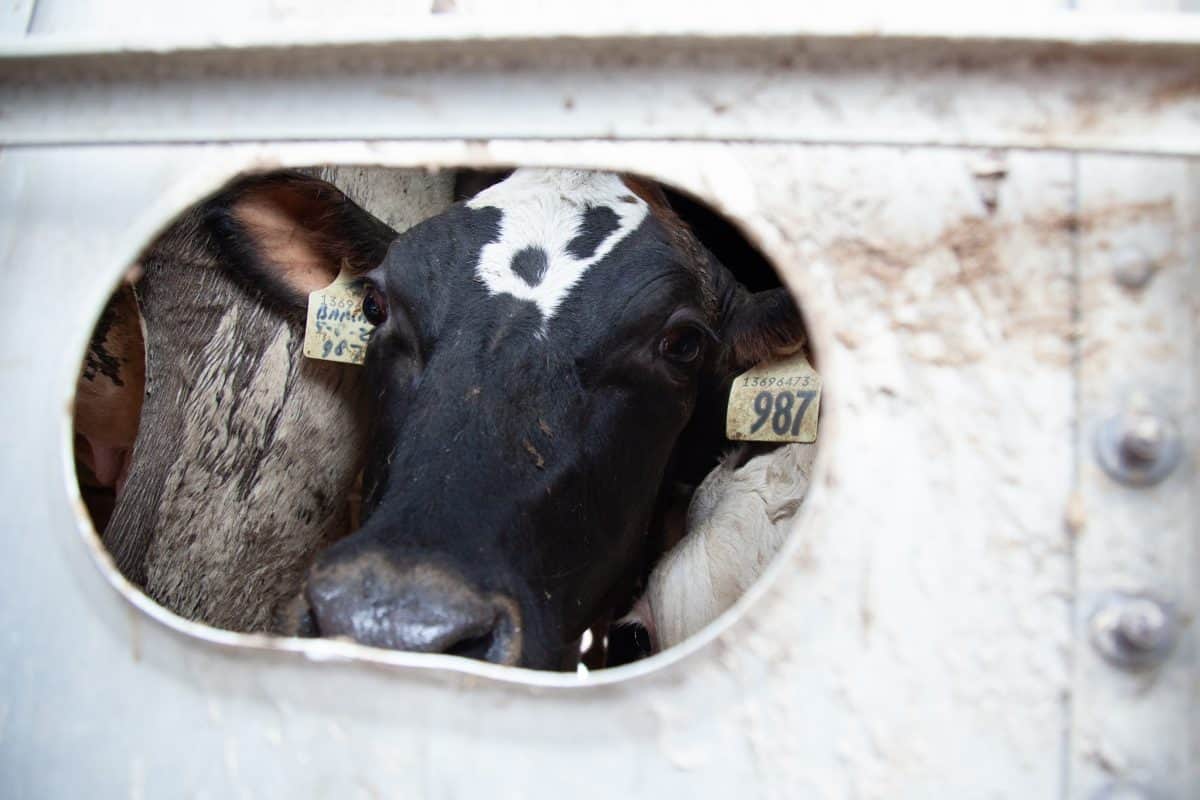 Behind every glass of dairy milk, slice of cheese, or scoop of ice cream there is an exploited animal that suffered. Dairy is one of the cruelest industries in the world, although they try to cover it up with photos of “smiling” cows plastered across packaging. But once you know the truth about how the dairy industry hurts not only cows but our planet, you will hopefully be inspired to make simple changes in your life to put them out of business for good. After all, if we can live healthy and happy lives without harming animals or the planet, shouldn’t we do that? 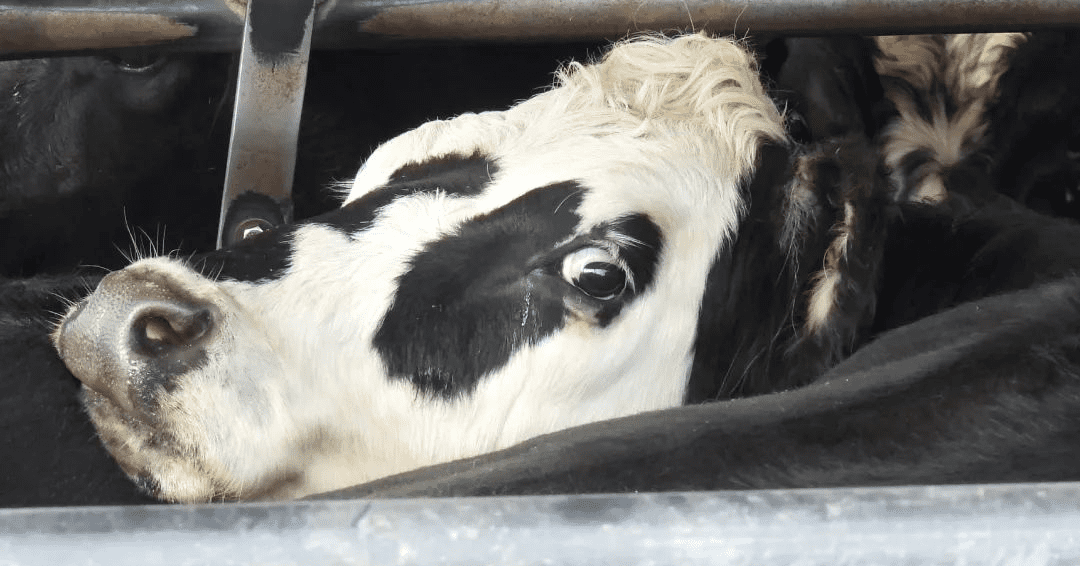 Greenhouse gas emissions from human activities such as raising cows for their milk contributes to climate change. Animal agriculture is a major contributor to the climate crisis and greenhouse gasses and scientists have warned us we must reduce methane emissions. A BBC article titled Climate change: Which vegan milk is best? Examines the environmental impact of dairy milk versus plant milk.

“…producing a glass of dairy milk results in almost three times the greenhouse gas emissions of any non-dairy milks, according to a University of Oxford study.

“Producing a glass of dairy milk every day for a year requires 650 sq m (7,000 sq ft) of land, the equivalent of two tennis courts and more than 10 times as much as the same amount of oat milk, according to this study.” - BBC

The above article includes an interactive component where you can insert foods you eat from a drop-down menu and see their impact on the environment. For example, eating 30g of (dairy) cheese, enough to cover two crackers, once a day for an entire year contributes 352kg towards your annual greenhouse gas emissions. It’s “the equivalent of driving a regular petrol car 899 miles”, “the same as heating the average UK home for 55 days”, and the same as using “82,703 liters of water” which is equal to 1,272 showers lasting eight minutes. (BBC) These numbers are staggering, especially when the solution is simple. Ditch dairy to save the environment and enjoy plant-based alternatives such as oat milk, coconut cheese, and soy ice cream that uses far less water, land, and produces way less emissions than any dairy product.

Lakes, rivers, and streams are becoming more polluted and the dairy industry is guilty. Cows kept on dairy farms produce excrement daily and this waste ends up in waterways causing pollution. The land supporting the cows cannot absorb all the manure and as dairy farms continue to grow larger the issue only gets worse, such as what is happening in Lake Michigan.

“The problem is that many of those dairy farms generate so much manure that the land can’t absorb it all. When that happens, the waste seeps into the earth, where it trickles into fissures in porous rocks and then into groundwater, or it spills out of storage pits, lagoons, and pipes, polluting surface water.” – Natural Resources Defense Council

There have been cases of manure spills washing into streams and killing fish in North Carolina on pig and chicken farms and this can also happen on dairy farms.

“In the US, the amount of waste produced by livestock in concentrated animal feeding operations (CAFOs), also known as factory farms, is tremendous. Livestock manure, unlike human waste, is not treated before it is disposed of. The untreated manure emits airborne chemicals and fumes, and when runoff occurs, dangerous pollutants enter our waterways. The US Environmental Protection Agency (EPA) has the authority to regulate CAFO waste, but has yielded to pressure from the meat industry and largely shifted its regulating responsibility to the states.” - Foodprint

Land is being cleared at an alarming rate and forests, native grasslands, and bushlands are being destroyed to make room for cows and other farmed animals and crops to feed them. This not only causes massive biodiversity loss to the original creatures living there but destroys entire habitats.

“The global food system is on course to drive rapid and widespread ecological damage with almost 90% of land animals likely to lose some of their habitat by 2050, research has found. A study published in the journal Nature Sustainability shows that unless the food industry is rapidly transformed, changing what people eat and how it is produced, the world faces widespread biodiversity loss in the coming decades.” – The Guardian

Dairy farming is a massive global industry with 270 million dairy cows in the world and they drink tons of water. Water is also required to grow crops the cows eat to survive, to clean the facilities where they live, as well as in the slaughter process once dairy cows can no longer produce milk and are killed.

Sustainable water practices are rarely used in the meat and dairy industries.

“As climate change continues to cause severe weather events in increasing frequency, including droughts and floods, water will become an increasingly scarce resource. But when it comes to environmentally sustainable water use, meat companies lag behind other corporations in the food industry, according to a report by Ceres, a nonprofit environmental advocacy group.” – Investigate Midwest 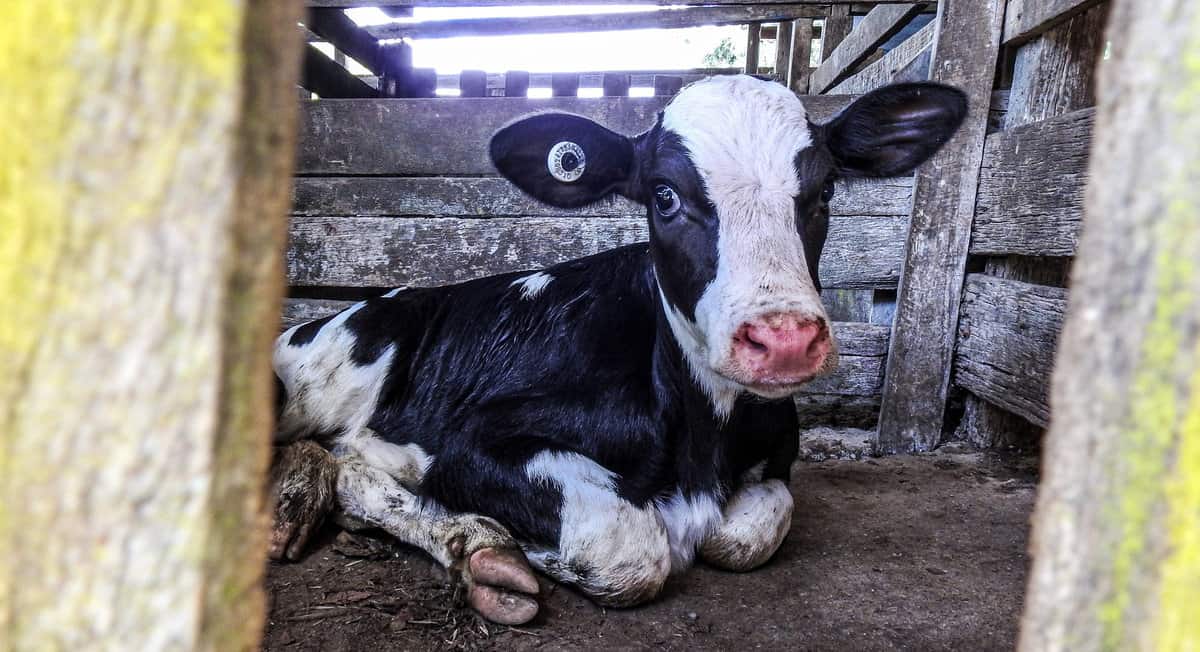 4. Dairy and veal industries are connected, both are cruel

You can’t have one industry without the other because just like human mothers, in order for cows to produce milk, they must give birth. Female cows are artificially inseminated when they turn one. The dairy and veal industries work together by exploiting female cows for their milk and the male calves are killed for their meat. Female cows must maintain a steady supply of milk for farmers and are forced to give birth year after agonizing year for about five years until their bodies can no longer do it. A cow’s natural lifespan is about 20 years.

Female calves born into the dairy industry face the same traumatic fate as their mothers and eventually must also watch their babies being stolen shortly after giving birth. (This happens on ‘organic’ dairy farms too). Mother cows have been known to bellow for hours or days in mourning and pace in tiny cages searching for their babies. Male calves destined for veal are fed milk substitutes intended to have them gain two to three pounds daily. Without the dairy industry the veal industry would not exist. We have the power to shut down both industries if we stop buying these products.

5. The dairy industry is violent

“…an undercover investigator with Mercy For Animals documented horrific animal cruelty at the largest dairy producer in Canada, Chilliwack Cattle Company in British Columbia. The abuses caught on hidden camera include: workers viciously kicking, punching, beating, and hitting cows in the face and body with chains, canes, metal pipes, and rakes….Workers using chains and tractors to lift sick and injured cows by their necks.” – Mercy For Animals, Canada

Once female cows can no longer produce milk they are crammed together into transport trucks without food or water and shipped to slaughterhouses where they are terrified and violently killed.

“By the time the exhausted cows reach the slaughterhouse, many are too sick or injured to walk. These cows, known to the meat and dairy industries as “downers,” often have ropes or chains tied around their legs so that they can be dragged off the trucks.” - PETA

Animal activists bear witness to cows on the way to slaughter with Animal Save Movement. Louise Jorgensen, the organizer for Toronto Cow Save explains,

“We regularly witness transport trucks filled with cows discarded by the dairy industry, whose milk production has declined, arrive at the slaughterhouse. Many arrive in different stages of pregnancy and with painfully engorged udders still dripping milk. It’s painful to witness the fear and confusion in the eyes of these gentle mothers and to hear their long, low bellows for help. To know we have no power to stop the violent fate that awaits them. We witness their skins, heads, and unborn calves in blood filled trucks and dumpsters at the opposite end of the slaughterhouse.”