How does living your entire life in a bathtub sound? Probably not very good. Dolphins, like many other marine creatures, were meant to swim in open water, not stuck in tanks or other enclosures. Wild dolphins live in large social groups and swim vast distances daily, up to 100 kilometers. In tanks all they can do is swim in circles and are forced to perform pointless tricks. They are denied the opportunity to do what comes naturally to them. These extremely smart mammals have unique personalities, are able to use tools to capture food, and in some places, are considered non-human persons. Read on to learn more about dolphins and how you can take action to stop their exploitation.

Dolphins learn things very quickly and can pass this knowledge onto others, an indication of intelligence. These adorable cetaceans solve problems, teach, play, mimic, experience grief, joy and show empathy. They also demonstrate self-awareness and can recognize themselves in the mirror. Scientists discovered that dolphins have large brains compared to body size, second only to humans in this ratio. This suggests they might be the second smartest creatures on the planet. They are highly social and share many characteristics with us and great apes due to their high level of brain function. A major study published in Nature Ecology & Evolution reveals that dolphins share many behavior traits with humans that are both social and cooperative. So if dolphins have a human-like level of self-awareness, is that not enough proof they should never be kept in captivity? Let alone forced to perform tricks at the circus. 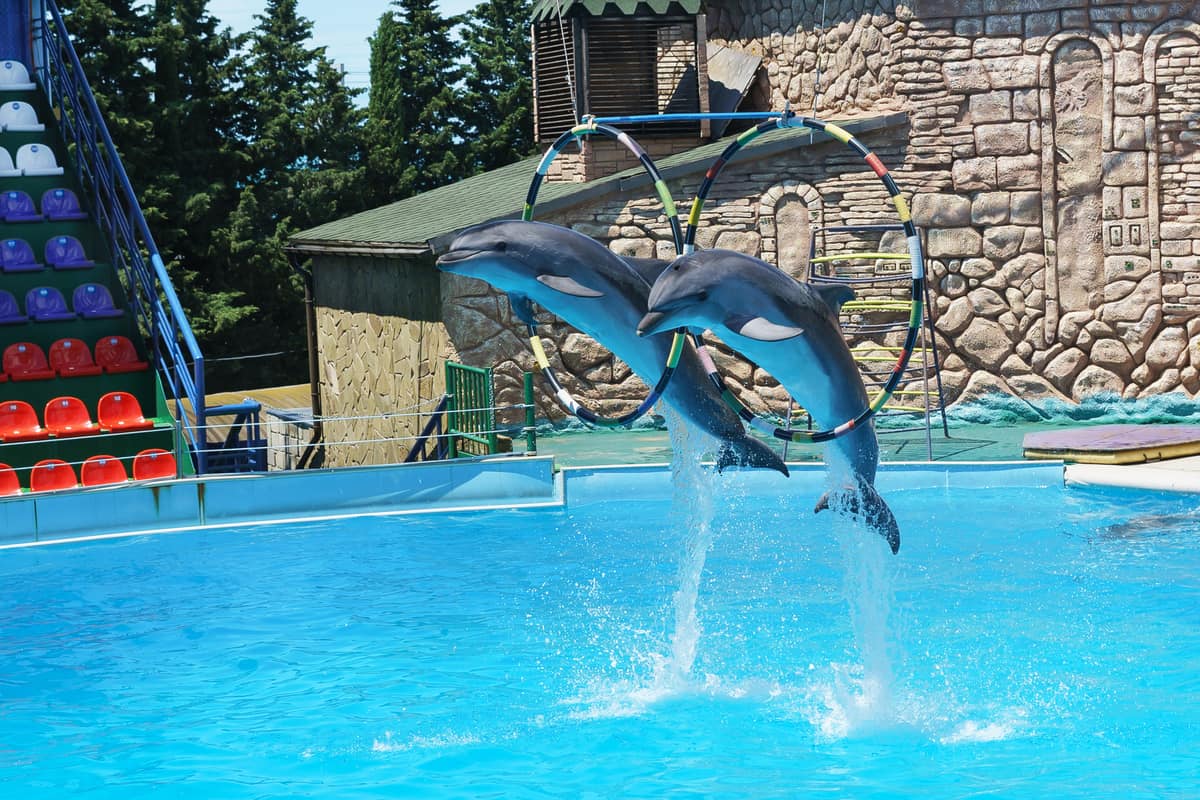 Dolphins can think, plan, and communicate with each other. They are thoughtful and curious with distinct personalities. They spend their lives in large groups when left in the wild and even blow bubbles when hunting for their next meal. How cute is that? They also have their own signature whistles similarly to how we have names and they interact with others in their pod.

An article published in The Guardian last year explains their personality traits compared to ours.

“A study, published in the Journal of Comparative Psychology, looked at 134 male and female bottlenose dolphins from eight facilities across the world, with each dolphin’s personality being assessed by staff at the facilities. The results of the study found a convergence of certain personality traits, especially curiosity and sociability.””…“Dolphins, like many primates, have brains that are considerably larger than what their bodies require for basic bodily functions; this excess of brain matter essentially powers their ability to be intelligent, and intelligent species are often very curious.” - The Guardian

Needless to say, dolphins are not meant to be performers and jump through burning hoops of fire, have people ride on their backs, or swim in endless circles in tiny tanks.

3. Dolphins can use tools to find food

Like humans, dolphins can use tools and are one of the few animals in the world that have been documented doing this. Female bottlenose dolphins in Shark Bay, Australia have been seen carrying sponges over the beaks as they swim. Dolphins then use the sponge as a tool to dig up fish from the seafloor.  The sponge protects their beaks from dangerous rocks that get in the way. They shuffle it around in the sand until they catch a fish and then drop the sponge to enjoy their meal. Data on sponging behavior has been reviewed over 20 years and it’s been concluded that mainly female dolphins do this, despite the mother dolphin teaching both male and female calves how to use sponges. It has also been discovered that dolphins in Shark Bay used conch shells to trap fish and shake them into their open mouths. Sadly, when kept in tanks at aquariums, dolphins have no opportunity to do natural things like this. In captivity their food is given to them (sometimes they must perform tricks to even get it) and although some people might think it’s easier when food is simply handed over, it is not. It creates extreme boredom when motivation is stolen and this can lead to depression and self-harming behaviors. Some dolphins become so frustrated in captivity they need antidepressants to keep going.

4. Dolphins are threatened by the fishing industry

Like so many sea creatures, dolphins get stuck in massive fishing nets and are killed. Hundreds of thousands of dolphins, whales, seals, sharks, turtles, and porpoises are considered bycatch when they get stuck in nets and ropes meant for the millions of fish killed by the industry. Boats drag long fishing lines through the water at various depths with hooks attached to them and they are left out overnight. The lines are up to 50 feet long and lure in any sea creature in the area looking for a meal. This method of fishing is also harmful to marine environments and destroys our planet. Once fish and other marine life get stuck on the hooks they drown, bleed to death, or struggle for hours. If the bycatch dolphins manage to survive they are thrown away like garbage because they are useless to the fishing industry. If you do not want to contribute to the senseless death of any marine creature, the best thing you can do is stop eating fish.

Learn more about the fishing industry and how to start a Fish Save group here.

5. Dolphins are non-human persons, at least in India

In 2013 India officially recognized dolphins as non-human persons. Their right to life must be respected and the government issued a report stating the cetaceans are extremely intelligent and sensitive creatures.

“India's Ministry of Environment and Forests has advised state governments to ban dolphinariums and other commercial entertainment that involves the capture and confinement of cetacean species such as orcas and bottlenose dolphins. In a statement, the government said research had clearly established cetaceans are highly intelligent and sensitive, and that dolphins "should be seen as 'non-human persons' and as such should have their own specific rights."” - DW

Three years prior, in 2010, Helsinki, Finland drafted a Declaration of Rights for Cetaceans.

“We affirm that all cetaceans as persons have the right to life, liberty and well being.”

They went on to conclude ten points, two of which are;

“Every individual cetacean has the right to life. No cetacean should be held in captivity or servitude; be subject to cruel treatment; or be removed from their natural environment.” - Declaration of Rights for Cetaceans

These positive steps in India and Finland have inspired dialogue around the world and raised issues surrounding animal consciousness and their ability to feel pain, joy and experience self-awareness. Even before this declaration, Costa Rica made it forbidden in 2005 to catch and kill marine mammals and keep cetaceans captive or trap them. In 2018 Mexico City banned dolphinariums - hopefully other cities in Mexico follow their lead. In Canada history was made in 2019 with new laws put into place that bans the breeding, display and trade of cetaceans for public entertainment with the passing of Bill S-203.While certainly a huge step in the right direction, it still allows places like MarineLand to keep the dolphins (and whales) they currently have, but at least they cannot breed them.

“There is no law in the United States that is specifically designed to protect the welfare of dolphins.” – World Animal Protection

However, in Maui, Hawaii there is a ban on the display of any captive dolphins or whales; and  the Malibu City Council in California declared all dolphins have the right to freedom and introduced the Orca Welfare and Safety Act in 2014 and it was passed in 2016.

Dolphins deserve freedom and to be treated with love and kindness wherever they live in the world.